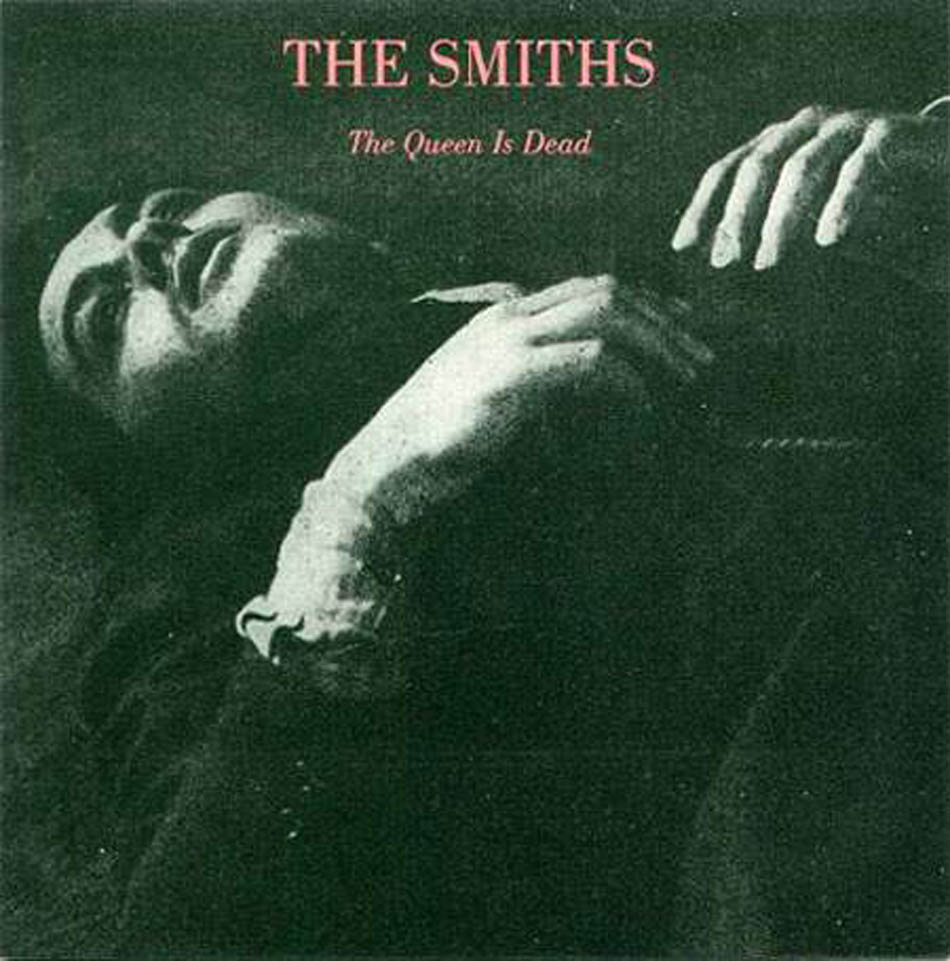 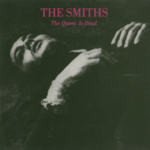 By 1986, nearly three years of quality singles and equally great albums and compilations had established The Smiths as one of the most consistently brilliant and distinctive guitar bands of the eighties, but they had yet to make an undisputed masterpiece – one of those instant, all-time classics that cement an artist’s place in pop history. 1984’s sepia-tinged, self-titled debut had established their trademark sound – jangly guitar pop welded to urgent, insistent rhythms combined with Morrissey’s introspective and acerbic wit – and while 1985’s solid Meat Is Murder had refined and solidified that aesthetic, it was something of a holding pattern. Despite their established, huge cult status and indie 7” singles and EPs, there was the expectation that The Smiths had another gear to go through before they operated at maximum output when it came to a full-length album. All that was to change with The Queen Is Dead.

Though their ascent had been meteoric, all was not well in The Smiths camp in December 1985 when they headed into the studio. For a start, legal difficulties meant that the finished album didn’t get released until June 1986, nearly six months later. Renegotiating their recording contract with Rough Trade proved lengthy and arduous – resulting in frustration that was reflected in the album’s lyrics with Rough Trade’s owner Geoff Travis the titular target of ‘Frankly, Mr. Shankly’. Furthermore, the band was without a manager, as nobody could cope with Morrissey and Johnny Marr’s wildly fluctuating professional relationship, and bassist Andy Rourke was fired and reinstated between recording and release for his spiralling heroin use.

However, from this turmoil came their musical and lyrical tour de force, a collection of songs that remains as thrilling, funny, heartbreaking and beautiful as it did when released 30 years ago. The Smiths’ distinctively English sense of ennui, humour and fatalism was present as always, but this time there was something more grandly theatrical and dramatic about the music, elements that evoked the qualities of war-time British music hall. Indeed, this is an impression that is given right from the start, as the title track opens with a sample of the World War I song ‘Take Me Back To Dear Old Blighty’, immediately giving the record a curiously timeless atmosphere. What also comes through on The Queen Is Dead, more than any other Smiths release, even 30 years later, is just how funny it can be. They may be primarily famous for being miserable, but their most famous album has to be one of the most clever and witty records in rock history.

The pummelling, driving rhythm laid down in ‘The Queen Is Dead’ by drummer Mike Joyce, with Marr’s squalling overdubs of guitar coming off like a cross between The Velvet Underground and MC5, and Morrissey’s scabrous commentary on the royal family and British attitudes towards it (“Her very Lowness with her head in a sling / I’m truly sorry but it sounds like a wonderful thing”), then turning that analysis on himself (“She said ‘Eh, I know you and you cannot sing’ / I said ‘that’s nothing, you should hear me play piano”) is probably the most physically bracing track they ever did. It serves as one of the most enduring moments in The Smiths’ entire catalogue, a six-minute whirlwind of drama and biting humour. The following ‘Frankly Mr. Shankly’ could hardly more different, a springy, loping rhythm reinforcing that British music hall feeling as Morrissey rails against the entertainment industry as a whole.

Completing a lethal and incredibly diverse opening trio is the heart-stopping ‘I Know It’s Over’. The affected, repeated line of “Oh mother, I can feel the soil falling over my head” was intended as self-parodic, but is oddly moving as it seems the only apt metaphor for Morrissey to express his complete outsiderdom. Set to a gentle, twilit waltz that ranges from almost complete silence, bar Rourke’s occasional bass rearing itself up, to an emotional apocalypse complete with orchestra, ‘I Know It’s Over’ is staggeringly bleak. Morrissey doesn’t leaven this track with any humour, in contrast to other moments where he gives a knowing wink to the audience (‘Heaven Knows I’m Miserable Now’, for example). It’s all about setting, with Marr’s guitar dialled down to some acoustic strums as he lets Joyce and Rourke take the lead, as Morrissey painfully dissects why he feels he’s so unlovable. Though it wallows in self-pity, the musical context and deadpan delivery make it work spectacularly – the listener feels distinctly uneasy, the singer’s emotions rendered in inescapable high-definition.

Following the gloomy interlude of ‘Never Had No One Ever’, whose openness serves as a bit of a breather after that opening salvo but acting as a coda to that lonely, late-night feeling of ‘I Know It’s Over’, The Queen Is Dead ties together a strong combination for the middle of the album. The airy ‘Cemetry Gates’ sees Morrissey channel his hero Oscar Wilde as he bats off accusations of plagiarism (some vinyl copies of the record have the Wildean quotation “Talent borrows; Genius steals” etched into the run-out groove). Similarly self-referential and catty is the album’s first single ‘Bigmouth Strikes Again’ (“now I know how Joan of Arc felt”), whose robust, splenetic rhythm is cross-hatched by some very strange female-sounding backing vocals – credited to ‘Ann Coates’, who actually turned out to be Morrissey’s voice sped-up.

Proving once again that he wasn’t just some self-pitying sap, Morrissey’s lyrical concerns on The Queen Is Dead were again largely directed outwards, something which had been the most significant aspect of Meat Is Murder. Delivering a series of witty, withering and self-deprecating satires on the conservative mores of British society – aiming at intellectualism (the deliberately misspelled ‘Cemetry Gates’), class (‘The Queen Is Dead’) and even himself – it was his most formidable display of songwriting prowess yet. Combined with Johnny Marr’s complex guitar textures sounding more abrasive and focussed than ever before, it meant that every single moment seemed so perfectly phrased, like nothing else could be added or any extraneous part taken away to make them better.

To absolutely secure The Queen Is Dead’s status as an undisputed classic, two of Morrissey and Marr’s finest joint compositions adorn the second half of the album. The wistful, proudly vulnerable grace of ‘The Boy With The Thorn In His Side’ was a singularly exceptional moment, orchestrated gently and driven by Marr’s sweeping guitars as Morrissey speaks to all the shy teens out there as he signs off with “and when you want to live / how do you start / where do you go / who do you need to know?”. One of Morrissey’s most frequently revisited topics in The Smiths was his determination to challenge people with preconceived notions of masculinity and his stoic sense of pride in his own alienation, turning flaws into virtues, and the lyrics for ‘The Boy With…’ are arguably the best example of this. Marr’s jangling, almost celebratory guitar riff is at odds with these sentiments, but the way it changes gracefully between major and minor key means that, at its climax, music and lyrics match perfectly. It was such an effortless piece of music that hit so hard, so poignantly, and proves The Smiths’ genius.

Then, following the flamboyant faux-rockabilly of ‘Vicar In A Tutu’, there’s arguably The Smiths’ most iconic song ever. We’re talking about a band that seemed to make such signature songs for fun – ‘How Soon Is Now?’, ‘This Charming Man’, ‘Heaven Knows I’m Miserable Now’… there are just so many you could cite, but ‘There Is A Light That Never Goes Out’ is the best of the lot. Often topping, or at least featuring near the summit of those occasional lists of the greatest indie songs of all time, it wasn’t actually released as a single until 1992 in support of the Best…I and Best…II compilations. Appearing as the penultimate track, its soaring chorus, melodramatic lyrics and gentle keyboard flourishes near the end, it felt as if every special moment had been building up to it.

Morrissey’s wish for self-martyrdom with the ten-ton trucks and double decker buses crashing into him and the object of his pathological desire is as humorous as anything else he sung, but not blackly so. What comes through is his wish to experience life, but being locked outside of those experiences – he wants to see people and he wants to see lights, but he’s always on the outside looking in, never able to access them. The striking beauty of his vocal performance is enough to carry an entire album by itself, but combined with one of Marr’s most ambitious structures ever, it stands as one of the greatest singular moments in pop history.

Moving, witty, poignant and ultimately hopeful in its conclusion, ‘There Is A Light…’ offsets the idea that The Smiths are mere miserablists – there was so, so much more to them than that. In many ways, The Queen Is Dead should have ended right there – the closing track, the catchy but more disposable ‘Some Girls Are Better Than Others’, is given an impossible task in following it, but its lightness feels appropriate, a small palette cleanser to throw the rest of the record into an appropriate relief as the listener ruminates over everything that’s happened. Some argue that the presence of such lighter, throwaway moments like ‘Some Girls…’, two more of which are present in ‘Vicar In A Tutu’ and ‘Frankly, Mr. Shankly’, mean that other Smiths albums win out. However, the presence of such variety displayed how versatile The Smiths were at this moment in time – and, personally, to have had an album of ten consecutive weighty moments like ‘I Know It’s Over’ and ‘There Is A Light…’ entirely populating the album would have risked it collapsing under its own weight.

Simply, The Queen Is Dead is one of only a few dozen albums in more than 60 years of pop music history that absolutely defy criticism, whose brilliance and cultural importance is not only obvious, but proven again and again as time passes and more artists acknowledge its influence. Just over half a decade later, the likes of Blur and Suede took inspiration respectively from Johnny Marr’s dense, innovative guitar textures that took all the bullshit notions of machismo out of the concept of the ‘guitar hero’ and Morrissey’s unique, light-hearted and wildly affected vocal delivery that took the gravitas out of all his rueful, cryptic and self-analytical lyrics. Both as a writer and a singer, The Killers’ Brandon Flowers owes a clear debt of gratitude to the kind of low-key, British kitchen-sink drama as he sought to apply the same wit to blue-collar America.

The Smiths have always been one of the most perfect bands ever, with very few better examples of such a strong, coherent audio-visual aesthetic shaped by such a tense and fractious collaborative relationship, right down to those sepia-tinted, monochrome single sleeves of forgotten stars of stage and film. The Queen Is Dead is the most perfect distillation of that aesthetic, throwing up new pleasures and standing up to repeated listens, with Stephen Street’s production sounding remarkably fresh three decades later, and the album is essential ownership for anybody even remotely interested in the development and history of modern guitar-pop.

Listen to The Queen Is Dead here via Spotify, and tell us what you think below! 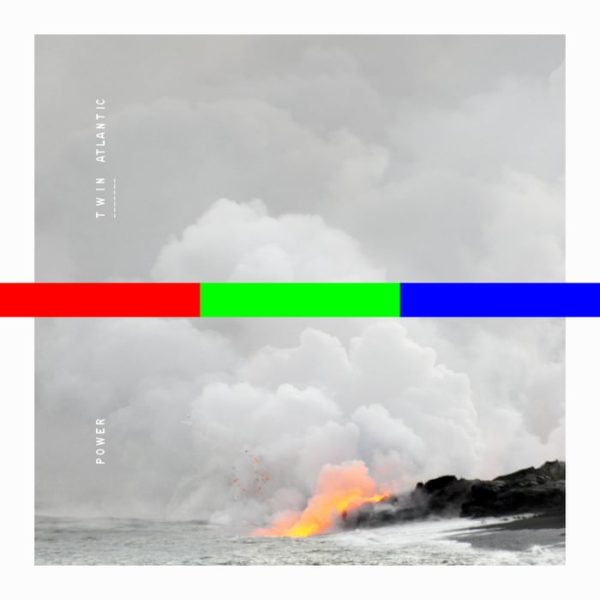 While innocuous on first impression, 'Hotspot' is as intelligent and reflective an album as…