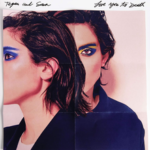 Tegan Rain and Sara Keirsten Quin, identical twin sisters from Calgary recording under the name Tegan and Sara for the best part of 20 years now, are a remarkable duo. Rising to fame in the mid-‘00s for their indie-rock music, they met with acclaim from critics for their albums The Con and Sainthood. But on previous record Heartthrob in 2013, their sound moved in an unashamedly pop direction – anybody even vaguely exposed to popular culture will have heard their theme song to The Lego Movie ‘Everything Is Awesome’ – and Love You To Death, the duo’s eighth album, follows the same formula. A little too much at times, but never so much that it’s ever anything less than highly entertaining.

Love You To Death is a tightly produced electro-pop album, something we’ve come to expect when Greg Kurstin is in the studio and it works incredibly well. Lead single ‘Boyfriend’ is everything one would expect in a modern-day pop song – giant singalong choruses, synth-based hooks and about love being difficult – but Tegan and Sara have always had that ability to be better than their contemporaries and that is no less true now. ‘Stop Desire’ follows a similar formula, but to even greater degrees, the song skips along brilliantly and exudes confidence in the hook of the playful vocals and percussion. Lyrically the song may be typical for pop (“You can’t stop desire, oh oh oh oh oh”) but there isn’t a single throwaway lyric – everything packs a punch right between the eyes – it may be obvious, but they do it all extremely well.

The solitary, fleeting complaint is how similar it is to Heartthrob, and while the two albums are virtually identically constructed, Love You To Death takes an already successful formula and doubles down on it, in the process making a more relatable record; pronouns are more prominent with “she” and “her” used regularly, and as such there is an imperceptible but unmistakable extra layer of power to every track. Love You To Death is formulaic and repetitive, but most of all a fantastic pop album, and on this sophomore effort of their new direction, the Canadians sound confident and comfortable with themselves. (8/10)

Listen to Love You To Death here via Spotify, and tell us what you think below!