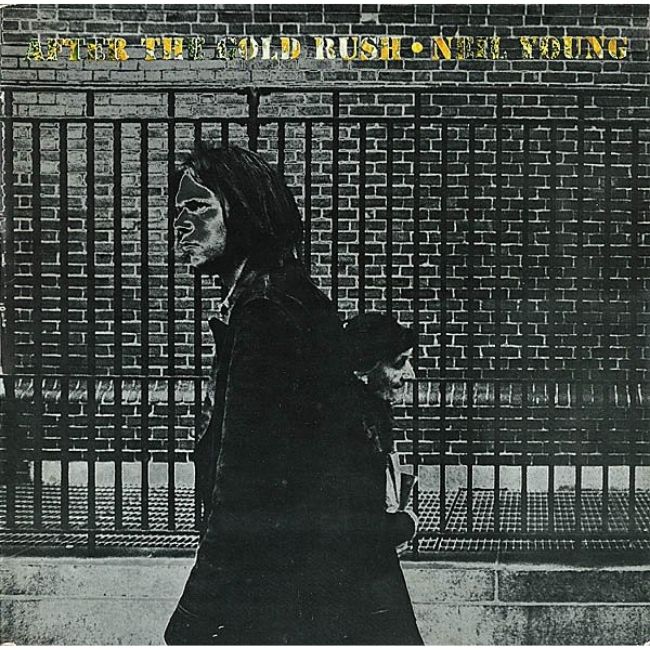 Throughout his career, now well into its sixth decade and showing no signs of slowing up in terms of productivity, Neil Young has alternated between two basic modes, each didactically opposed to the other. Everyone knows and loves the ragingly loud guitar shredder of ‘Like A Hurricane’, ‘Cinnamon Girl’ and ‘Rockin’ In The Free World’, dubbed the Godfather of Grunge in the Nineties and capable of headlining huge festivals and filling vast arenas. But, somewhat counterintuitively, Neil Young also makes complete sense as a heartbroken, road-weary folk troubadour, making music more suited to late-night acoustic sets in run-down bars and whose aesthetic presaged the MTV Unplugged idea. It was this paradigm that first came to the fore on Young’s 1970 album, After The Gold Rush.

Young was fresh off the back of the success of Déjà Vu, his chart-topping collaboration with David Crosby, Stephen Stills and Graham Nash. Initial sessions were commenced amid a short tour at the start of 1970 with his backing band Crazy Horse – who had accompanied him on Young’s last solo outing Everybody Knows This Is Nowhere. However, partly due to the deteriorating drug habit of mercurial guitarist Danny Whitten (who Young kicked out of the band shortly afterwards and whose death was marked in Young’s starkly sad Tonight’s The Night album in 1975) only three songs ended up being used on After The Gold Rush. One of those, the ferocious and controversial ‘Southern Man’, gives us a glimpse into the kind of album that it could have ended up being.

Instead, the majority of After The Gold Rush was recorded in a makeshift basement studio at Young’s Topanga Canyon home during the spring, with CSNY bassist Greg Reeves, Crazy Horse drummer Ralph Molina and a fast-rising star by the name of Nils Lofgren on piano – later to be a member of Crazy Horse and Bruce Springsteen’s E Street Band. This alteration in personnel helped contribute to a pensive, reflective and introverted album, markedly different to the kind of music that Neil Young had been associated with up until this point, and one that truly revealed him to be a great songwriter, able to craft original melodies of enormous beauty and marry them to sentiments that were universal but revelatory in his hands. It all may seem a bit parodic to a new listener half a century later, but Young is one of those all too rare songwriters who can totally slay you with a simple chord change.

A stark, love-lorn yet poignant and emotionally open listening experience, After The Gold Rush was the point at which Neil Young truly started to become a star in his own right, separate from other entities such as Crazy Horse, Buffalo Springfield and CSNY. The album’s cover art perfectly encapsulates the sentiment, a sepia-tinged photograph of Young walking down a nearly deserted street, looking solemnly into the middle distance out of shot.

That hopeless romanticism can be heard throughout the album’s highlights. Borne aloft by two acoustic guitars played by Young and Lofgren, the gorgeous opening track ‘Tell Me Why’ lays bare the country and folk influences that had hitherto been only latent in his work. The same mood is present in the forlorn waltz of ‘Only Love Can Break Your Heart’, the beautiful precision of ‘Birds’ and the heart-rending cover of Don Gibson’s ‘Oh, Lonesome Me’, in which Young slowed down the rollicking original and brought new meaning out of the lyrics. The almost weightless ‘Don’t Let It Bring You Down’ is extremely typical of Young’s lyrical style – again, to the point that it seems almost self-parodic if you’re coming to it new – but the originality and accessibility of the melody and his delivery is striking if you approach it in the right mood.

The very finest moment is in the magical title track, ‘After The Gold Rush’. Performed on a lonesome piano and with an ambience like a dream you’ve just woken up from and are struggling to remember the details of, there are strong ecological and supernatural themes being flagged up by lyrics like “silver spaceships”, “colours flying”, “chosen ones”, “archers split the wood” and “all in a dream”, colliding three timelines together. Given its title, it feels like a requiem for an America that had all but vanished by 1970, of innocence lost and corrupted, although Young has never been forthcoming about what ‘After The Gold Rush’ means. Either way, it’s an incredible piece of music.

Young claims that a great deal of the lyrical material on After The Gold Rush was inspired by an apocalyptic, unused screenplay by actor Dean Stockwell and Captain Beefheart collaborator Herb Berman. If that’s true, then it’s remarkable just how effective that Young is at taking abstract material and making it seem so intensely personal. As such, it’s generally held as a late entry to the Great American Songbook – even more impressive, given Young was born in Canada.

Pretty much universally hailed as a masterpiece upon its release – except, weirdly, by a seriously misguided reviewer for Rolling Stone who panned it – After The Gold Rush broke Neil Young into the Top Ten in America, Canada and Britain, finding commercial success where Everybody Knows This Is Nowhere had won over the critics. Its mood paved the way for the chart-demolishing Harvest, which became the biggest-selling album in America in 1972 and which has sold nearly five million copies. Ever since, Young has frequently re-visited the moods he established on After The Gold Rush – Tonight’s The Night, Comes A Time and Nineties late-career classics like Harvest Moon and Silver & Gold have all used the same aesthetic.

Listen to After The Gold Rush by Neil Young here via Spotify, and tell us what you think below!