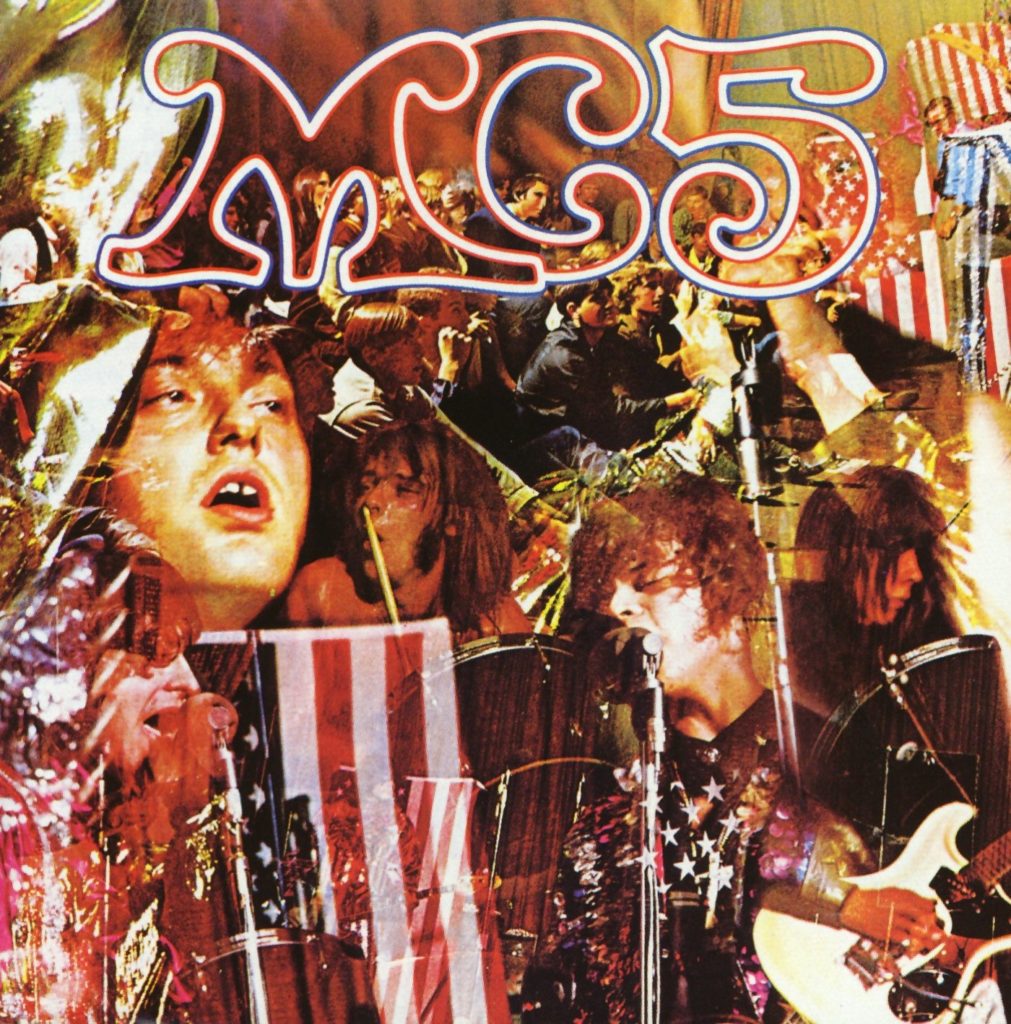 Influenced by: Little Richard, Link Wray, The Sonics, The Velvet Underground, The Rolling Stones, The Who, Sun Ra, Jimi Hendrix, The Doors

It’s often said that pop and politics don’t mix, but the thought that rock should be somehow apolitical or deliberately unengaged was at one point anathema to musicians, particularly on the other side of the Atlantic. Whether it be Hendrix immolating his guitar and playing the freak-out Star-Spangled Banner at Woodstock, Gil-Scott Heron’s proto-rap treatises on racially-divided America or Kanye’s infamous declaration on national TV that George W. Bush “doesn’t care about black people”, activism and outspokenness have gone hand-in-hand with music for a long time. There’s arguably no greater evidence of this than the opening seconds of ‘Kick Out The Jams’, the signature song by the short-lived but highly impactful Detroit outfit MC5, taken from the incendiary live album of the same name, released in February 1969.

Consisting of lead singer Rob Tyner, guitarists and backing vocalists Wayne Kramer and Fred ‘Sonic’ Smith, bassist Michael Davis and drummer Dennis Thompson, the Motor City Five were enamoured with R&B, blues and jazz, particularly the music of John Coltrane and Sun Ra, and the beat poetry of Allen Ginsberg and Modernists like Charles Olson, on top of the likes of Chuck Berry and Dick Dale that influenced an awful lot of American garage bands of the mid-Sixties. But what was most notable was not their high-octane musicianship, impressive though it was, but their image.

The charismatic John Sinclair, who acted both as MC5’s manager as well as a kind of Professor Griff-style disseminator of information and propaganda, was largely responsible from taking the band from the legions of other similar sounding Detroit-based acts to the incendiary agit-prop rock’n’rollers you can hear on Kick Out The Jams. He was the founder of the militant leftist organization the White Panthers, and at his encouragement the MC5 adopted a hell-raising stage presence. Dressed in an explosion of colours and regularly off their heads on LSD, they would appear onstage toting unloaded rifles, and at the climax of their performances, an unseen ‘sniper’ would shoot Tyner.

Having performed as part of the formal protests against the Vietnam War at the Democratic National Convention in Chicago in August 1968, which ended up with rioting and police brutality, a month later MC5 was snapped up by the prestigious rock label Elektra, and it came time for MC5 to start releasing albums. Unusually, rather than attempt to bottle the lightning of their live performances in a studio, they opted to stick to their strengths and record their debut album in their natural habitat – onstage and in-front of a baying home crowd. So it was that they took to the stage over two nights at Halloween time 1968 at the Detroit Grand Ballroom, with sound engineers from Elektra capturing the group’s standard set-list.

It was an unusual move that ultimately paid off, but not everybody involved with it was happy. On its 50th anniversary, guitarist Wayne Kramer said: “Had we had a studio version, we would probably have entered the classic-rock canon, ‘cos it would have been radio friendly”. While the MC5 now have a very different kind of reputation as proto-punk pioneers, you can kind of see Kramer’s point. The resulting record was a bewildering blow-out of hard rock, mutated blues, wild psychedelic soloing and blistering political rhetoric. In fact, it’s mainly thanks to the brilliance of experienced sound engineer and producer Bruce Botnick that Kick Out The Jams is as clear as it is, resolving the mess of straining guitars, chugging rhythm sections and ragged overlapping vocals into something as listenable as it is.

But it’s the raw energy and power, and the all-encompassing vision that it had for rock music at a time when the hippy dream was dying, that makes Kick Out The Jams such an enduring historical document over any concerns about listenability and clarity of production. It’s an album that’s simply impossible to play quietly, where you can practically smell the tear gas and feel the electricity in the air, the ominous threat of authority closing in on the gig and itching to pull the plug.

Before the onslaught of opener ‘Ramblin’ Rose’, John Sinclair acts as emcee and whips the crowd into a frenzy with his exhortations to action and ideological purity. “Brothers and Sisters, the time has come for each and every one of you to decide whether you are going to be the problem or whether you are going to be the solution! It takes five seconds, five seconds of decision, five seconds to realize your purpose here on the planet!” he hollers with quasi-religious fervour before MC5 crash in.

Throughout the album’s breakneck eight songs, the group sprawl through white noise and feedback, cosmic jazz freakouts and polemical frenzy with a glorious sense of abandon. While it’s sometimes clumsily executed, you get the sense that’s because their engines are over-revved rather than it being the result of sloppiness or under-preparedness. The cavalcade of ‘Borderline’, the volleys of slashed chords and the menacing drone of ‘Rocket Reducer No.62 (Rama Lama Fa Fa Fa)’ are futuristic thrills; the Troggs-esque beat-pop monster ‘I Want You Right Now’ shows their more accessible side; while the brilliant Sun Ra meltdown of ‘Starship’, complete with spoken-word cosmic utterances and an atonal disintegration at the end, almost collapses under its own pomposity. Their version of John Lee Hooker’s ‘Motor City Is Burning’, the only slow-ish moment and one of the few occasions on which the MC5’s musical virtuosity truly shines through, rumbles with unrest and insurrection.

But while the inflammatory rhetoric that prefaced ‘Ramblin’ Rose’ and the vivid imagery of social disorder and industrial decline of ‘Motor City Is Burning’ were controversial in themselves, the biggest uproar centred around the title track. Rob Tyner’s insurrectionary cry of “right now it’s time to… kick out the jams, motherfuckers!” is one of the most legendary moments in rock history, encapsulating a raw proto-punk sentiment nearly a decade before punk even hit. It would be iconic enough without a single note being played, but its deathless, relentless riff sums up the primal and primordial thrills of rock like few other songs in the genre’s vast canon.

Upon release, Kick Out The Jams was initially cursed with the same kind of indifference that met all the rest of the MC5’s previous and subsequent output. They’re one of those bands whose importance to rock music outweighs any kind of commercial clout they had. Rolling Stone’s Lester Bangs panned the record to begin with, describing it as a “ridiculous, overbearing, pretentious album”, while other positive reviews had little impact on its sales at first. The explicit language of the title track meant Hudson’s department store refused to stock Kick Out The Jams, and when MC5 hit back by taking out a double-page newspaper ad saying ‘Fuck Hudson’s’ with the Elektra label’s logo on it, Elektra were faced with a  boycott of their entire back catalogue. The group was proving more trouble than they were worth, and Elektra dropped MC5 like a hot potato.

Because it was recorded live, Kick Out The Jams contained qualities which, try as the band did, they could not replicate in the studio. Coupled with the policy of benign neglect that MC5 met on their new home of Atlantic, where the label was concentrating on plugging less troublesome and more immediately lucrative acts like Led Zeppelin, the group’s story is ultimately that of bad luck and being ahead of their time. Their eventual first studio album proper, Back In The USA, produced by future Bruce Springsteen collaborator Jon Landau, sounded compressed and limited in comparison to the short, fast and angry-edged proto-punk of Kick Out The Jams, and by 1971’s High Time, MC5 were in dire straits. Though it boasted more ambitious song structures and no small amount of impressive musicianship, going on to influence several hard-rock bands later in the Seventies, High Time was badly promoted anddidn’t even make the Billboard Top 200, and the group collapsed soon afterwards.

But like many other bands from that age who are now lauded, their influence gradually made itself felt over time. MC5’s impact, and especially that of Kick Out The Jams, can still be felt today, and not just on the hard-rock bands of the early Seventies. The gung-ho, all-guns-blazing execution of many of its songs mimicked the chaos of The Libertines in the 21st century, while the stripped-down, chunky blues riffage of tracks like ‘I Want You Right Now’ informed the deliberately restricted palette of The White Stripes. Meanwhile, the lysergic splashes of colour and noise can be heard in the likes of Tame Impala and King Gizzard & The Lizard Wizard.

Listen to Kick Out The Jams by MC5 here via Spotify, and tell us what you think below!