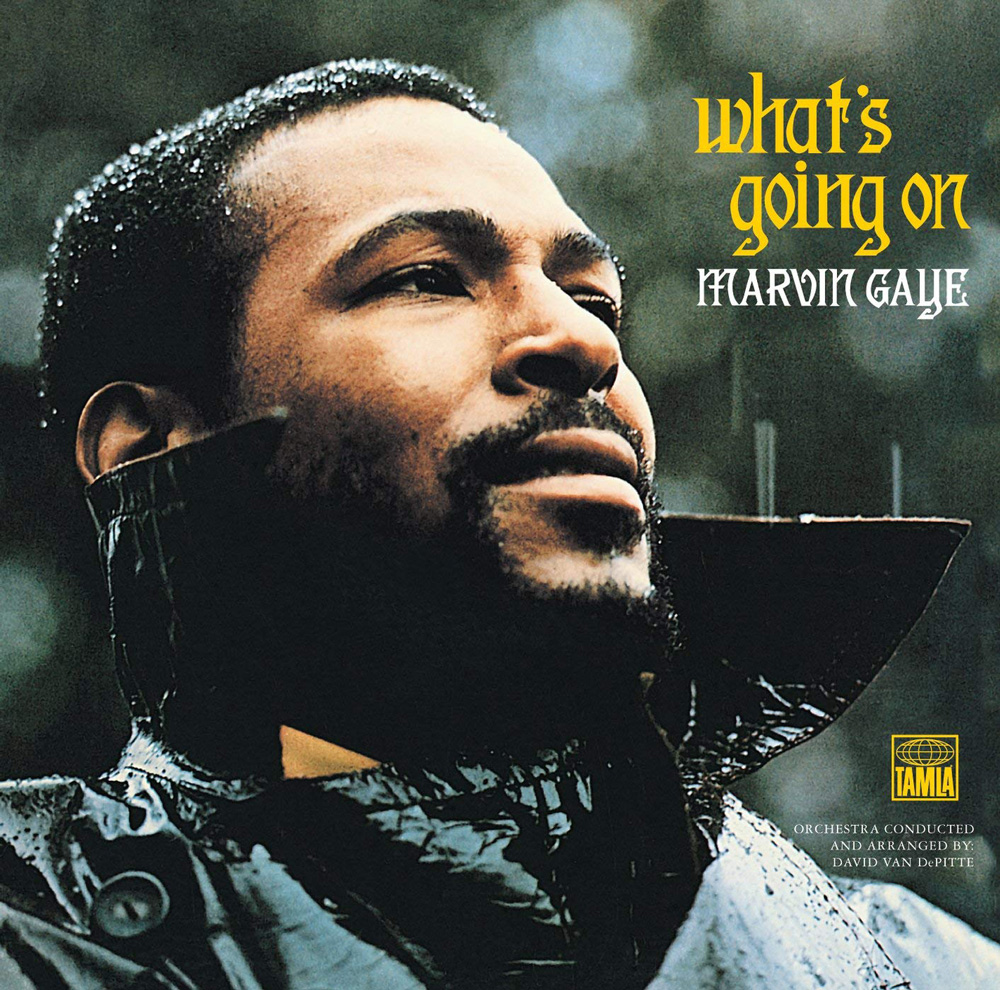 For anybody who thinks that the Motown label was a flawless hit-generating machine that churned out classic after classic, consider the reception that greeted Marvin Gaye’s ‘What’s Going On’ as he presented it to the label’s head Berry Gordy in late 1970. It was “the worst thing I ever heard in my life,” the mogul told his star singer. The music was too loose and languid, the subject matter too political, with the potential for career suicide. Gordy refused to release it as a single. A confrontation ensued, with Gaye countering that the themes of urban poverty and systemic racism were on-point for a hugely divided America at the start of the Seventies. The singer threatened to never record for Motown again. Eventually, Gordy relented. ‘What’s Going On’ was a huge hit, becoming the second-biggest song he had ever made for Motown behind ‘I Heard It Through The Grapevine’, and Gordy was soon encouraging Gaye to make a full studio album.

All of which goes to show: even the most seemingly impeccable of track records is never perfect. It’s an interesting thought exercise, though, to imagine a world in which Gordy had prevailed and the song (and its subsequent parent album) had never been released. Fifty years later, ‘What’s Going On’ is such a universal standard in terms of theme, vibe, what it stands for, that it’s instantly familiar to everybody on the planet (even if the melody itself might not be). Its concise, simple lyrics bear sentiments we all know and which are woven deep into our collective lexicon – “War is not the answer / only love can conquer hate”, for instance, or the spoken “right on, brother” between the verses and chorus. A song as ubiquitous as this is often difficult to critically analyze, simply because it’s incredibly hard to imagine a world in which nobody had written such a thing.

PLAYLIST: An Introduction to Motown Records

A slight alteration of the melody and lyrics of a song that was given to him by Four Tops singer Renaldo Benson when he saw the carnage of police brutality exacted on anti-Vietnam War protestors in California in May 1969, ‘What’s Going On’ is not only a signature song for Marvin Gaye and the soul genre in general, but also an enduring statement of universal brotherhood, one that makes sense as a radiant exhortation of optimism but also as one of frustration and desperation.

It was conceived and written at a crisis point in Gaye’s life, when personal and professional tragedies were beginning to engulf him. By the end of the Sixties, he was in a terrible place. He was in trouble with the taxman, embroiled in creative arguments with Motown, and increasingly addicted to cocaine. His marriage to Anna Gordy (the sister of the aforementioned label’s boss) had fallen apart, and his singing partner Tammi Terrell had died suddenly from a brain tumour. One night around this point, Gaye was stopped from committing suicide by an intervention from his father-in-law.

The turning point seems to have been Gaye’s decision to get back in touch with his faith and embrace spirituality, simultaneously engaging in activities that would bust him out of the intense, constant cycle of recording, releasing and performing that his career had been characterized by in the Sixties. He refused to promote his 1970 album That’s The Way Love Is, and at one point seriously considered pursuing a career as an NFL pro. Inspired by the Vietnam War and social upheaval in America, he determined to address more socially conscious themes in his music. “I was very much affected by letters my brother was sending me from Vietnam, as well as the social situation here at home,” he told Rolling Stone. “I realized that I had to put my own fantasies behind me if I wanted to write songs that would reach the souls of people. I wanted them to take a look at what was happening in the world.”

Hiring a mix of Motown house musicians and outside session veterans, Gaye embarked on recording the songs that would make up What’s Going On in the summer of 1970. The sessions were laid back and fruitful until, in September that year, Gaye responded to Gordy’s slamming of ‘What’s Going On’ by going on strike, mothballing the sessions and embarking on different work. That was until March 1971, when Gordy was sideswiped by the single’s enormous success, reaching no.2 in the Billboard Hot 100. The Motown head told Gaye that he could do whatever he wanted with the album, as long as he completed it within 30 days, effectively giving the singer a blank cheque for the rest of his career.

What he came up with was an expansion of his formula of short, sweet, love-based soul hits so dramatic that it may as well have been a complete revolution. What’s Going On is a masterclass in the resolution of moods and themes that, in music, hadn’t been balanced before. The symphonic majesty of Brian Wilson’s vision for the Beach Boys in Pet Sounds had introduced mature themes into popular music five years earlier, but this was something else entirely. Marvin Gaye helped revolutionise soul music, inverting his existing image so that he could look sexy even though he had the weight of the world on his shoulders, to smile through the sorrow.

Setting the tone with the title track, What’s Going On unfurls in much the same vein throughout, with Gaye’s soulful and impassioned vocals underpinned by elements of gospel, jazz, funk and classical music orchestration all played out against a shimmering backdrop of multi-tracked backing vocals that stacks up to the heavens. Although he spends the time lyrically analyzing urban decay, environmental woes, military turbulence, police brutality and rising unemployment, there’s an unmistakable sense of optimism shot through the dire warnings – that things, however bad they are and despite the fact they seem to be getting worse, can be better. The answer is not hopelessness, but action.

For every moment like ‘What’s Happening Brother’ that deals with the disillusionment of Vietnam war vets, Gaye tells us that the answer is right in front of us. “War is hell, when will it end? / When will people start gettin’ together again?” he exhorts there. Even with lyrics as bleak as “to save a world that’s destined to die”, the soaring jazz of ‘Save The Children’ becomes utterly radiant as Gaye cries “save the babies!”. These kinds of moments are punctuated by slightly lighter interludes in the form of ‘God Is Love’ and ‘Wholy Holy’, both emotional gospel pleas for unity. The seven-minute jam of ‘Right On’, a serpentine journey influenced by Latin soul and funk, opens the second half of the album in a different mood to the first. With all tracks segueing into each other, What’s Going On plays like a jazz experience, like “one long single”, in the words of music writer David Hepworth.

Bringing the suite of the album’s first half to a close is the gorgeous ‘Mercy Mercy Me (The Ecology)’, a poignant song of sorrow for Planet Earth at a point when mass awareness of environmental issues hadn’t yet been achieved. It turned into the album’s second Billboard Top Ten hit, alongside the sultry but hugely bleak album closer ‘Inner City Blues (Make We Wanna Holler)’. Harrowing images of urban decay and economic collapse stalk a dark, minimalist and blues-influenced soundscape, characterized by the sultry bongos and crystalline bass figure. If there was a sense that humankind was, despite all the misgivings that Gaye outlines in the rest of the album, travelling towards some inevitable point of redemption, ‘Inner City Blues’ instructs the listener to think again. You can feel the grime, pressure and tension even underneath the song’s utterly graceful exterior.

It’s hard to think of a more complete LP experience than What’s Going On, both in terms of sonic ambition and narrative structure. It starts with a vision of the possibility of utopia through communication, tolerance and enlightenment, and ends with a terrifying gaze into the abyss, a statement of street-level realism defined by struggle and despair. It reflected back America’s collective loss of innocence that the Vietnam War had engendered, as well as serving as a cri-du-coeur of the Black experience. Ever since it was released, when it sold nearly two million copies in its first year and became Gaye’s most successful album by far to that point, the record has regularly been hailed as one of the greatest ever. In the revised 2020 edition of their 500 Greatest Albums of All Time list, compiled by musicians rather than music writers, Rolling Stone named What’s Going On at the very top. Quite apart from the massive musical influence it’s had on artists from Curtis Mayfield and Prince to contemporary figures like Kanye West, its legacy is one of political enlightenment and social activism. The album’s themes of police brutality, climate breakdown, inequality and foreign wars are still current today, being opposed by Black Lives Matter and Extinction Rebellion. It’s hard to think of another album-length piece of popular music that’s got the same credentials.

Listen to What’s Going On by Marvin Gaye here via Spotify, and tell us what you think below!