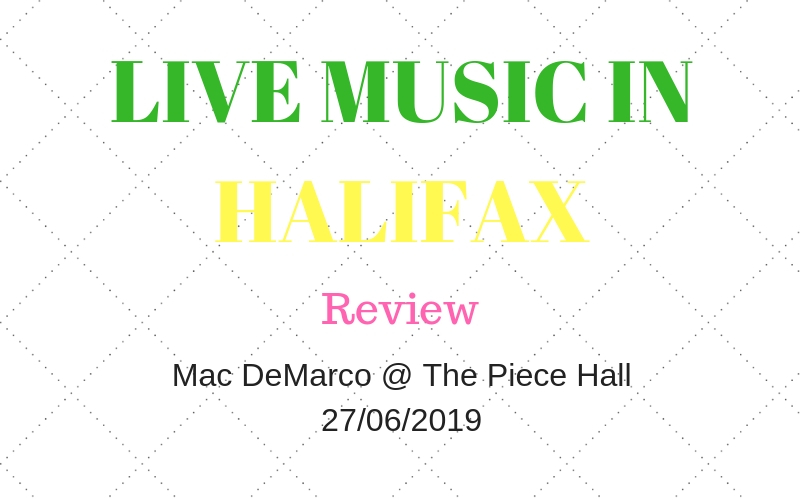 The Piece Hall is one good-looking venue. A grandeur courtyard-shaped building with a marketplace history, on this particular day it became the base for the Big Gig Weekender, opening on the Thursday with a headline from Mac DeMarco and closing with a set from former Mercury Prize-winning veterans Elbow on Sunday evening. All the enthusiasm over how blessed the gig-goers were for the sunshine aside –  the weather was more than pleasing, not to mention in accordance to the atmosphere created by the acts – The Piece Hall felt like a proud and poised place for all the gig tomfoolery to go down at. The prim and proper-ness of the cascading stairs and water streams seemed surprisingly welcoming to the youths laying about, waiting for the event to unfold as an air of a city festival could be sensed.

Working Men’s Club were soon to disrupt the amicable peace, causing a post-punk ruckus, followed by the mullet gang from Australia Amyl & The Sniffers. Fighting stances in position, the supposed pub rock band seemed both as the nicest people you’d ever meet and as people who would mess you up BAD in a blink of an eye if you crossed them. The frontwoman Amy Taylor herself delighted in the quick-to-form mosh pits and seemed veering on the edge of the stage to jump in herself. Effortlessly cool, these Aussies knew exactly what they’re about.

Yellow Days followed, with pleasant harmonics as the first notes to gloss over the just-happened happy-rage fest, soothing the crowd into more of a sway than a bop. The sound of the stage, unfortunately, wasn’t too forgiving for this act, as the melodies of Yellow Day’s songs lost a bit of their allure in the overall noise of the venue, serving more as a pillow before Mac than an appetizer.

And after all, there he went. To the tune of Katrina & The Waves ‘Walking On Sunshine’, Mac DeMarco and his crew bounced into the stage to take over with a set of fan favourites and sprinkles of the new in between. ‘On The Level’, ‘Salad Days’, ‘Freaking Out The Neighbourhood’, ‘Cooking Up Something Good’, ‘My Kind Of Woman’, ‘Still Together’, ‘Chamber Of Reflections’… just a handful of beloved Mac tunes that came out to play that night, to much of the excitement of the crowd. Huddling together, obviously there was the distinct aroma of weed about, yet the overall loving atmosphere that engulfed the crowd seemed to stem deeper than something merely drug-induced. Mac seemed at home on stage, charming as ever, his signature cig in mouth, serving the best of the dad dance move variations, his bandmates comfortably joking around with the crowd between tracks as the King of Moustaches – guitarist Andrew Charles White – promised to return next year as he’s been pressured into buying a year-long Halifax pool membership.

New tracks from the recently released and somewhat divisive Here Comes The Cowboy did not drown in the sea of fan favourites, ‘Nobody’ and ‘Choo Choo’ in particular causing an exciting commotion. Worth mentioning, ‘Here Comes The Cowboy’ made an appearance as part of the massive end-of-the-gig jam sesh that was the glue between the start of ‘Still Together’ and the end of it. Morphing with ‘Killing In The Name’ of Rage Against The Machine, the jam seemed to be what possibly keeps Mac DeMarco’s band alive and running during touring, as the instrument swapping and riffing on well-known classic rock bangers delighted the band as much as the crowd.

All the madness ended on a sweet note, wrapping up the day one of the Big Gig Weekender. Romance and ‘sexiness’ (promoted by Mac DeMarco himself as the mood of the day before launching into a lush track off Here Comes The Cowboy) aplenty, it was clear that the Thursday was a success. (Aiste Samuchovaite)