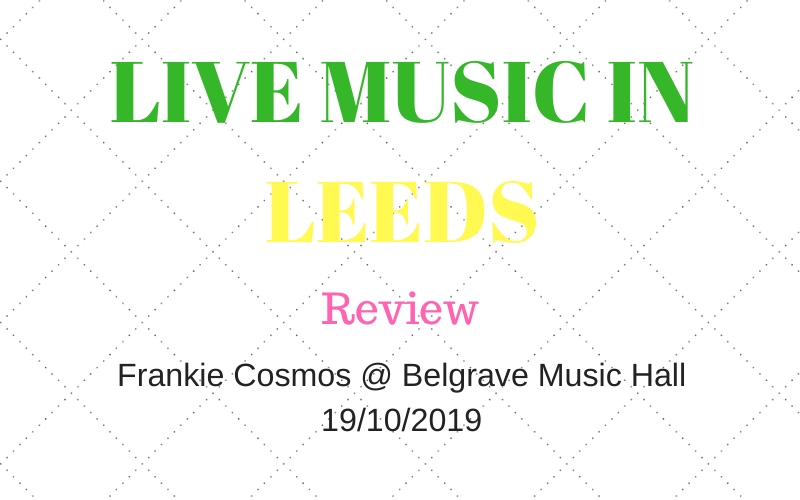 It was two Saturdays ago that Greta Kline’s ethereal voice reverberated across Belgrave Music Hall in an hour-long set, lulling the audience into a hypnotic trance only to later leave them with a feeling of bittersweet incompleteness. That yearning for intangible closure very much echoes the existentialism flowing out of Close It Quietly, the fourth studio album of American band Frankie Cosmos released back in September. Kline’s abstract, minimalistic lyricism perfectly blends with the short length of her songs, which rarely exceed the two-minute mark. Infused by bursts of energy, the band’s whimsical and erratic instrumentals follow a formula of unpredictability and genre-bending, encapsulating the lead singer’s multi-faceted inner world which constantly oscillates between the states of self-acceptance and sardonic self-deprecation.

The gig kicks off with opening act Lina Tullgren creating an intimate atmosphere with her mellow vocals, her laid-back style and ear-length bob bearing a striking resemblance to Kline’s aesthetic. Her tender, soothing guitar melodies delicately melt with various shades of purple light beams, whispering the crowd into the spellbinding bubble of a serene sensory experience. The interlude which follows Tullgren’s warm-up performance lifts the veil of dreamlike haze enveloping the room and replaces it with an electric buzz, as more concertgoers gather round with drinks in their hands and wait for Frankie Cosmosto make their appearance.

It’s not long before the band enters the stage, the four members exuding a kind of youthful timidity, Kline’s gentle greeting promising of what’s to come. The childlike timbre of her voice adds a fairy tale element to her song-writing, the brevity of every track tantalising the listener with a sense of unresolved suspension. Sweet, upbeat melodies are accompanied by swift tempo changes that act as a parodic escapism from Kline’s frequently dismal reflections on the state of the world and that of her own personal life. On occasion, the singer finds her vocals being drowned out by the intensity of Luke Pyenson’s drums and the strumming of her own electric guitar, making for a rather interesting sight as the swaying audience is encouraged to bop their heads to the instruments’ temperamental rhythm. Other times, Kline’s vocals blossom in tranquil isolation, shining alongside Lauren Martin’s velvety harmonies and Alex Bailey’s laid-back bass lines.

Staying true to the lyrics of ‘A Joke’ from new album Close It Quietly, Frankie Cosmos manifest themselves into an abstraction right before their audience’s eyes. Greta tricks time into a game of hide-and-seek and evades any clear-cut categorisation, her complex thought pattern assuming the form of small, disorganised emotional eruptions that are abruptly brought to an end as soon as they arise. The band’s resonation with its − mostly young − audience lies in their ability to encapsulate the short attention span of this generation, as well as the vacillating intensity with which young people deal with both the personal and the political, themselves and the world around them. (Maria Leontiou)