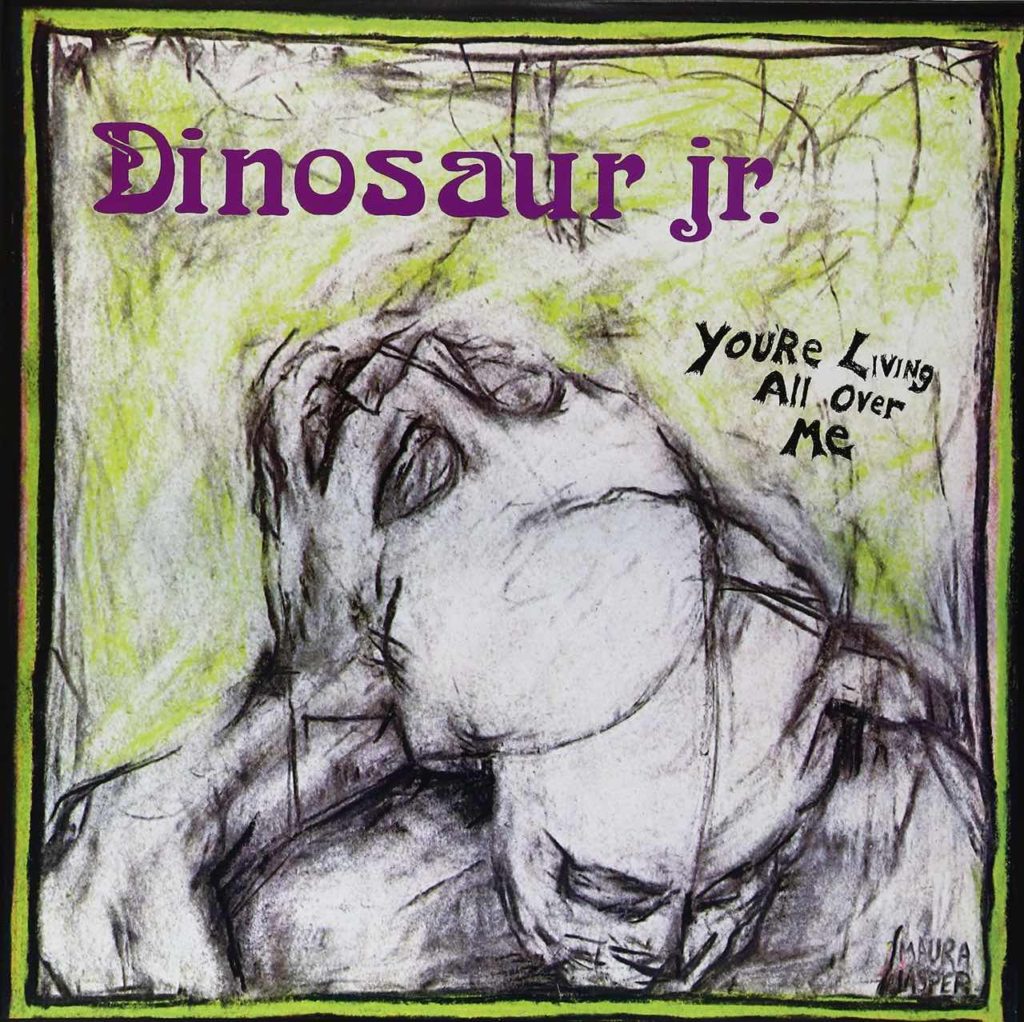 Dinosaur Jr. were one of the most significant bands for the second generation of indie and punk kids in America – a generation that had basically always known bands like Minor Threat and Black Flag but who had also grown up with older acts like Neil Young, Black Sabbath and Led Zeppelin. For them, the Seventies was more prevalent in their childhood consciousness than the Sixties.

Dinosaur Jr. represented a significant shift in the ‘80s indie scene in the States, at the vanguard with a number of groups such as The Replacements and Sonic Youth who were seeking to reverse the ‘year-zero’ mentality of the first-wave punk and hardcore acts and go for a ‘big tent’ approach when it came to influences. They weren’t afraid to embrace the music they had grown up with, ranging from classic rock sounds and introspective singer-songwriting, and consequently they were able to appeal a wider range of prospective fans. But while they abandoned the sensibilities of hardcore, they didn’t drop its intensity or volume – if anything, they increased it.

As such, Dinosaur Jr. had a profound impact on how the indie scene in the U.S. has evolved, and their second studio album, You’re Living All Over Me, is the most crucial and enduring part of their legacy.

Dinosaur Jr. began life as Deep Wound, playing a fast-paced version of hardcore of which lead singer J Mascis quickly tired and ditched in favour of a more expressive and varied formula. Originally the drummer in Deep Wound, Mascis played guitar in the embryonic Dinosaur (the ‘Jr.’ was tacked on after another obscure band named Dinosaur voiced protest) as loud and as hard as possible, effectively applying the logic of percussion to a stringed instrument. Signing to Gerard Cosloy’s Homestead imprint, their 1985 self-recorded debut album Dinosaur was an interesting if flawed first statement of the new band’s principles.

However, it was enough to pique the interest of SST, which was certainly the biggest and most experienced independent label in operation in the States. With the likes of Sonic Youth, Soundgarden, Bad Brains and Screaming Trees on their roster, they rolled out one of their most expansive promotional campaigns ever in order to push Dinosaur Jr.’s singles to college radio and local radio stations, just like major labels would, rather than relying upon word of mouth.

Taking its name from something that an exasperated Mascis told his two bandmates Lou Barlow and Murph on a cramped tour-bus, You’re Living All Over Me was more than two years in the making but represented a radical improvement on their debut.

You’re Living All Over Me had a paradoxical effect on the underground scene in late ‘80s America. Dinosaur Jr.’s music was at once a throwback to unfashionable principles in guitar music for ‘80s underground kids in America – namely, displays of musicianship such as guitar soloing – but it helped the scene break free of many of the more puritanical strictures of the post-Black Flag scene for many indie musicians. The musical principles underpinning hardcore and post-hardcore – no musical self-indulgence, essentially – were ideologically necessary at the start of the ‘80s as a counterbalance to the excesses of the rock mainstream, but by 1987 were holding back many guitar bands who wanted to expand the template.

Dinosaur Jr. was a volatile entity even at its most harmonious and creatively productive, and that inevitably spills over into the music of You’re Living All Over Me, which feels like it might either explode or collapse at any moment. Mascis’ furious and innovative soloing and riffing is the main focus for the listener’s attention, but the way his parts intertwine with Lou Barlow’s barrelling, prominent bass playing and the boom and clank of Murph’s drums is pure alchemy, the most perfect foil that Mascis could have hoped for. You’re Living All Over Me careens and lurches all over the place, much like the roiling moshpits that would soon accompany their live shows as word of Dinosaur Jr. spread.

Two key aspects of Dinosaur Jr.’s sound made them stand out from the rest of their ‘80s underground cohort. Firstly, Mascis used pedals when he played guitar – and the more, the better. Wah-wah, distortion, flangers and volume boosters – all of these things had been absolute anathema to the punk scene for the best part of a decade by this point, associated with old hippies and the indulgence of early Seventies music that punk had always stood against. While he deployed those pedals strategically – in order to propel themselves into the odd melodic chorus – it was nevertheless regarded as the slaughtering of one of the punk ideology’s sacred cows, even though it was a logical outgrowth of the massive walls of sound that groups like Hüsker Dü were already creating by 1987. When the master tape of You’re Living All Over Me arrived at SST, Mascis had to alleviate their concerns that the meter was “pinning” (meaning the volume on the tape was such that it was distorting) and tell them that this was how he intended the album to sound.

Secondly, Mascis’ vocals, unlike many of his contemporaries who tended to bark and shout their lyrics like drill sergeants, were actually sung. His drawl was laconic and expressive, a cool and often evocative focal point amid the chaos of the group’s mountainous sound. It’s like a slightly higher-pitched version of Pearl Jam’s Eddie Vedder just a few years down the road, an intonation itself derived from more melodic classic rock influences like Neil Young than anything the punk vocalists had to offer.

It all added up to a seemingly small but significant revolution in guitar music. As one critic at the time put it, Dinosaur Jr. was “a powerful sound that didn’t suggest power”. In this way, it was an American equivalent of Britain’s The Jesus & Mary Chain, whose feedback-drenched 1985 debut Psychocandy uncoupled the principles of guitar noise from their previously macho connotations – an inversion of one of rock’s traditional equations. It was loud, powerful rock music for losers, drop-outs and outsiders, and it was something that quickly became associated with Nirvana, the ‘slacker’ aesthetic and Douglas Coupland’s ‘Generation X’ as the alternative rock scene exploded in the early Nineties.

Opener ‘Little Fury Things’ acts as a mission statement for J Mascis, making rock’s creaking clichés sound expressive again by pulling them into new and different shapes. Sonic Youth’s Lee Ranaldo, an outspoken admirer of the Dinos, sits on backing vocals. The prodigious soloing and shredding on display feels like its being constantly marshalled by the group’s burgeoning instincts toward pop, giving the resulting mixture the feeling of being somewhere between Sabbath and Buzzcocks.

With titles like ‘Sludgefeast’ and ‘Tarpit’, you can detect a certain consistency in the band’s sense of musical identity – a murky raucousness that was inscrutable at first but absorbing and compelling to try to figure out. ‘Sludgefeast’ was a labyrinthine but powerful low-end heavy-hitter, with the guitars and bass tying themselves in knots as Mascis worked himself into an anxious frenzy. It’s both dreamy and absolutely granite-hard at the same time. ‘Tarpit’ was also one of their heavier moments, constructed from tape loops into a massive but sleepy-eyed wall of sound.

At the somewhat lighter end of the scale, but no less noisy, Dinosaur Jr. could also manage slightly more accessible moments like ‘The Lung’, a kind of alternative take on Seventies rockers like Lynyrd Skynyrd, or the engaging ‘In A Jar’, in my view the perfect encapsulation of Mascis’ aesthetic and the single best entry point into their catalogue. ‘Raisans’ is a flamethrower of trebly, almost atonal guitar soloing, something the indie scene had hitherto completely eschewed; while the buzzing, elastic bass dominating ‘Kracked’ makes it a short, sharp blast of noise.

Lou Barlow’s ‘Poledo’ closes out the album, offering a complete change of mood and pace as the bassist explored his weed-fuelled imagination and came up with a weird mixture of stoner rock and American folk. While it feels like an unfinished studio piss-about, it presages the kind of music he would explore with his own project Sebadoh after he quit Dinosaur Jr.

Subsequent editions of You’re Living All Over Me sometimes included a bonus track in the form of Dinosaur Jr.’s entertaining cover of The Cure’s ‘Just Like Heaven’, the original of which had only just been released in May the same year. In it, J Mascis and his bandmates act like a wrecking crew, taking delight in deconstructing it for their own ends, and it remains a staple of the band’s live sets to this day. But once you see past its initial novelty value (hearing them all bellowing “YOU!!!” in each chorus is a bit startling!) this cover tells you a lot about Dinosaur Jr. – at heart, underneath the oceans of noise, they were a fundamentally pop-orientated outfit, always welding their mountainous sound to a firm chassis of melody.

The influence of You’re Living All Over Me is most obvious when looking at the explosion of the Seattle-focussed grunge scene five years later. Every carpetbagging chancer was able to snap up a record deal by shaving the rough edges off of Dinosaur Jr.’s sound, standing in a plaid shirt and playing really loudly. The record had an impact beyond America’s shores and outside of ‘grunge’ too, though: My Bloody Valentine’s Kevin Shields routinely cited Mascis and co. as one of his key inspirations for his band’s lush, warm and expansive sound, and its impact on other ‘shoegaze’ groups is palpable. It is impossible to imagine the evolution of alternative rock without them.

Sadly, for Dinosaur Jr., You’re Living All Over Me would be the high-point of the band’s original and classic line-up. 1988’s similarly excellent but less cohesive Bug, containing arguably the group’s signature song ‘Freak Scene’, was the last album they managed, with Mascis barely speaking to both Barlow and Murph who had long since become alienated with the singer’s authoritarian approach to almost everything the group did.

Barlow quit the following year to pursue his nascent Sebadoh project, whose seminal albums such as 1993’s Bubble And Scrape and 1994’s Bakesale made him one of the few musicians to re-shape the American alternative rock landscape with two different bands. Indeed, Barlow’s first ever Sebadoh recordings were actually released as a tape titled Weed Forestin’ alongside some early pressings of You’re Living Over Me in the Boston area.

Murph held on for two more albums, 1991’s Green Mind and 1993’s spirited Where You Been before quitting himself. Mascis eventually disbanded Dinosaur Jr. in 1997 after two more disappointingly received records.

However, the Dinosaur Jr. story has had a happy conclusion. Putting aside his differences with his bandmates, Mascis reformed the group with Barlow and Murph in 2005, and that line-up has continued to record and tour ever since, notching up four more studio albums. The most recent of these was 2016’s impressive Give A Glimpse Of What Yer Not, which was as gleefully carefree and riotous as anything they had done three decades previously.

Listen to You’re Living All Over Me by Dinosaur Jr. here via Spotify, and tell us what you think below!