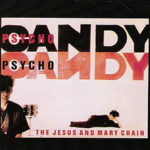 Although it quickly earned itself a reputation as being one of the most outrageously loud guitar debuts in pop history, it’s impossible to understand the last 30 years of British rock without an appreciation of Psychocandy, the first album by The Jesus & Mary Chain. Before, ‘noise’ wasn’t really a distinct concept in pop music, simply a function of the volume at which guitars were played. The Who, Sabbath, Zeppelin, and even the Pistols, were loud, but not in this way. Psychocandy was crackling, visceral white noise. Like bullets dipped in honey, JAMC dealt in 3-minute nuggets of the most beautifully melodic pop buried under an avalanche of distortion and squealing feedback, and the results were utterly transcendent.

Furthermore, JAMC’s debut had an important impact on how rock looked as well as sounded. Before 1985, it was generally believed that you had to expend a lot of energy jumping up and down, ‘windmilling’ and throwing clichéd rock star poses in order to produce volume on stage. The Reid brothers, Jim and William, changed all that, by turning up their amps to the point where the feedback was almost unbearable, standing absolutely still in leather ‘n’ shades, and playing at deafeningly loud volume. Oasis, who also never moved a muscle onstage, used the same idea for the dirty sound of their debut Definitely Maybe. In this way, Psychocandy constituted a feminisation of noise in pop – that is, with the aggression, machismo and cock-rocking connotations removed from the performance aspect.

The blueprint for Psychocandy was established with their 1984 debut single ‘Upside Down’, one of the first releases by Alan McGee’s legendary indie label Creation. With its cacophonous, caveman-like drums and squalls of feedback welded to the most heavenly of pop melodies, it was like The Shangri-Las covered by The Velvet Underground, a polar negative of a Phil Spector girl-group single.

“It just suggested itself,” lead singer Jim Reid told Rolling Stone in 2015. “We wanted the guitars to be as out there as possible. We wanted a fucked-up, distorted sound, and we had these pedals that we used. They did most of the work themselves. You just plugged them in, and they started screeching like you wouldn’t believe. That was the sound.”

However, it wasn’t a sound that was easy to sell to their record company. Having signed to the now-defunct Blanco Y Negro, a subsidiary of WEA set up by Rough Trade’s Geoff Travis, after the success of ‘Upside Down’ – a decision made partly because the group didn’t want to be limited by what they saw as the cul-de-sac of the world of small independent labels – the Reids immediately came up against strong opposition from Warners executives, who wanted JAMC to clean up their sound for radio-friendliness. Hailing from the Scottish satellite town of East Kilbride – which, in the Reids’ own words, was culturally detached from Glasgow, never mind London – they had gotten this far with the power of their own bloody-mindedness and were not about to compromise now.

Indeed, Psychocandy certainly ranks as one of the most startlingly singular and consistent visions in pop – 14 white-hot bursts of noise, only one of which goes significantly over the 3-minute mark. Once you become accustomed to the disorientating fuzz and blank-eyed attitude, you discover that Jim and William Reid stuck to surprisingly traditional and easily digestible pop structures that wouldn’t have sounded out of place on an early Beach Boys or Bo Diddley record. In this way, they referenced the very beginnings of rock ‘n’ roll, yet repackaged and updated it to sound utterly revelatory.

Take the opening track ‘Just Like Honey’, with its Ronettes’ ‘Be My Baby’ drumbeat and fragile, crumbling guitar line that builds into a gracefully cacophonous climax. A Top 20 hit, it built on the limited sold-out run of ‘Upside Down’ and the hype generated by the headline-grabbing riot at London Polytechnic. ‘The Living End’, ‘Inside Me’ and ‘Taste The Floor’, with their studied nihilism and effortless cool, felt so recognisable that they might have existed forever, a re-statement of the basics of rock for a new generation of listeners but unburdened of all its previous cultural baggage. Follow-up singles ‘Never Understand’ and ‘You Trip Me Up’ are amphetamine rushes of pubescent attitude and confusion, aggressively produced with kinetic, fast-paced rhythms. The elegantly wasted ‘Taste Of Cindy’, ‘Sowing Seeds’ and ‘My Little Underground’ were so tuneful that they could easily have been selected as singles, giving Psychocandy a handy greatest hits feel.

But this wasn’t a simple collection of identikit tracks – though their restricted palette was self-imposed, JAMC demonstrated a surprising amount of variety. The stunning sweetness of ‘Cut Dead’, with its “baaa-ba-ba-ba” intro, acoustic guitar riff, was a change of pace from the racket. Jim Reid’s cutesy lyrics about “honey can’t you see / you got me chasing honey bees” had more in common with Postcard / Sarah records of the rest of the Scottish indie scene, but it was a strong signifier of JAMC’s willingness to pay homage to what they regarded as the cornerstones of great rock and pop music. ‘The Hardest Walk’, one of the cleaner moments in terms of sound and also highly melodic, might have been some lost Brill Building composition, so graceful and poised is Reid’s vocal.

So, melody and noise were united, but they didn’t cancel each other out; instead the mixture heightened the listener’s reaction to both extremes. Never before did sugar-sweet pop sound so dangerous, and neither had such a blisteringly noisy ambience made such innate sense. Until now, these elements were poles apart; on Psychocandy, they were reconciled in a way that had previously seemed unimaginable. The craftsmanship, particularly in Bobby Gillespie’s two-piece, stand-up drum kit, was rudimentary, but the vision was unlike anything that had come before it, and made such complete sense that you wondered why somebody hadn’t done it already.

The aesthetic choice would influence a huge number of British groups subsequently. Oasis’ image derived from JAMC; Glasvegas, with their drummer standing up and playing simplistic rhythms on cavernous sounding floor toms, even more so; Garbage borrowed heavily from the melodic side of their split personality; Spiritualized from their noisy side, and My Bloody Valentine took that even further to create their 1991 masterpiece Loveless. On the other side of the Atlantic, the likes of Sleigh Bells and Wavves cannot be understood without them.

Divisive though it may be, Psychocandy has formed an integral part of the DNA of British rock music in the 30 years since. For anybody interested in the development of rock, the expanded 2011 re-issue is highly recommended listening, with radio sessions, B-sides and demos galore. ‘Some Candy Talking’, a stunning track released as an EP in 1986 but which featured on some single CD versions of Psychocandy, is absent even on the reissue, which is disappointing. Though they consistently dealt in fantastic singles, particularly 1987’s ‘April Skies’, 1990’s ‘Head On’ and 1992’s ‘Reverence’, The Jesus & Mary Chain never put together an album as brilliant as this.

Listen to Psychocandy here, and tell us what you think below!