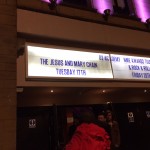 Released thirty years ago this November, The Jesus & Mary Chain’s first album Psychocandy is one of the most important developmental milestones in rock music as we know it today, not to mention one of the most aesthetically pleasing records of the 1980s. With their brand of simple, heartfelt ‘60s pop melodies buried under an avalanche of squalling feedback, Jim and William Reid redefined the boundaries within which rock ‘n’ roll could be played, making the world safe for noise-pop in the process. Before them, ‘noise’ in pop was simply a function of the volume at which the guitars were played. Black Sabbath, Zeppelin and even musically simpler punk bands like The Clash.

JAMC did it somewhat differently, using noise as an inherent part of their aesthetic, cranking up their monitors to ear-splitting levels and playing melodies you’d normally associate with The Ronettes or The Beach Boys in the style of The Velvet Underground or Suicide. The likes of My Bloody Valentine, Sleigh Bells, Spiritualized, The Verve and many more ‘90s and ‘00s favourites besides would simply not have sounded the same without them.

Since the Mary Chain reformed in 2007, and with no new material forthcoming, the Reid brothers’ decision to take their most fondly-remembered album out on the road for a cash bonanza is a forgiveable one, as it offers younger generations a chance to get acquainted with the band. Judging by the make-up of the audience at the O2 Academy, it’s a pretty even spread of ages. Though they never came close to equalling Psychocandy with any their following five albums, they did amass a fearsome arsenal of singles during that time. Tonight’s show begins with a whistle-stop tour of the highlights of that catalogue – UK Top 10 singles ‘April Skies’ and ‘Reverence’ get an airing, as does their US breakthrough hit ‘Head On’, a song later covered by Pixies. Their debut single ‘Upside Down’ from 1984, a kind of polar negative of a Phil Spector girl-group hit, is unleashed at a volume that can only be described as ‘bunker busting’, and it’s totally brilliant. 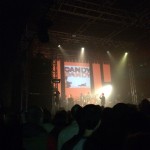 After a brief intermission, JAMC kick Psychocandy into life with the sublime ‘Just Like Honey’, a piece of pop perfection whose noise aspect builds up to be released in a blaze of passion in its outro. The Reid brothers deliver the rest of its thirteen tracks with grace and fire, each track a sugar-coated pill of anti-pop glory. Fast-paced tracks like ‘The Living End’ and ‘In A Hole’ are glorious, fuzz-drenched messes, while there are many moments of great poise, such as the moody, acoustic-driven ‘Cut Dead’ or the album’s secret weapon ‘My Little Underground’, which resolves JAMC’s twin tendencies for racket-making and sensitivity in the same song. All are replicated very faithfully by the three-strong backing band.

Though the money-spinner of touring to play an old album in its entirety is increasingly common, and being done in support of records that can barely be described as ‘good’, never mind ‘classic’ (Bryan Adams, we’re looking at you), the Mary Chain avoid the potential pitfall because a) they play with conviction, and b) Psychocandy holds as many relevant lessons in 2015 as it did in 1985.

Check out Psychocandy in full here!