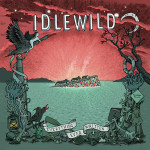 Front cover of ‘Everything Ever Written’

Six years out of the game isn’t that long when you compare it to the huge swathes of time groups like My Bloody Valentine and Suede have left between records, but it’s proved to be too much for Idlewild fans, who successfully launched an online petition for their heroes to make more music early last year. But why? Though they frequently landed Top 40 singles, Top 10 albums and Top Of The Pops performances during their early noughties commercial heyday, they petered out while contemporaries like Coldplay and Snow Patrol scored the multi-platinum records and sold-out stadium tours. Why are they so fondly remembered, compared to others who suffered the same fate back then?

Though their sound was quite capable of filling any venue, Idlewild’s true appeal was to the underground, fusing the sounds of the American North-Western and Scottish indie scenes, giving them a transatlantic sensibility and an automatic sense of kinship with every true indie fan. As the nineties turned to the noughties, lead singer Roddy Woomble went from a possessed, physical livewire to a restrained, bookish bard in his stage presence, as their music underwent a similar maturing process. Their golden run from 1998 to 2005 produced intelligent tracks that targeted the heart as well as the brain, like the wounded ‘Love Steals Us From Loneliness’ or the orchestral-punk swell of ‘You Held The World In Your Arms’ – their talent was to make sadness, confusion and emotional turmoil seem like empowering qualities or noble undertakings.

A couple of line-up changes have taken place for the reunion, with the addition of a keyboardist, a first for Idlewild, in the shape of Lucci Rossi, and bass guitarist Andrew Mitchell at the expense of Allan Stewart and Gareth Russell. Woomble, Rod Jones and Colin Newton remain the ever-present core of the band, and it gives Everything Ever Written an interesting dynamic. It explores some uncharted, occasionally startling, musical territory for the group, yet you can immediately tell that it’s of a piece with their previous work. Woomble is fine lyrical form, as always, but there’s a rawer, crunchier, distinctively American sound to the new album, with Jones’ musical arrangements now surrounding and playing off Woomble’s vocals, rather than merely acting as a backdrop to them.

It kicks off with first single ‘Collect Yourself’, and the new direction is instantly detectable, with its buzzing fanfare of guitar that’s reminiscent of Jack White’s solo material, before it settles down into some lean, white-boy indie funk. ‘Nothing I Can Do About It’, ‘Every Little Means Trust’ and ‘Radium Girl’ are slices of classic Idlewild, playing fast and loose once more with the REM songbook and blending that college rock sound with ‘60s pop. The sleek, powerful ‘On Another Planet’ harks back to the likes of ‘A Modern Way Of Letting Go’. ‘Like A Clown’ is a curious animal, a pretty acoustic guitar-led number set to some very chunky and odd-sounding percussion, while Woomble introspectively curses his own bad behaviour.

Woomble pulls out his usual lyrical tricks, mixing up past and present in paradoxes like “I’m in that photograph but it was taken before I was actually alive” on ‘(Use It) If You Can Use It’. The song itself is most unusual for Idlewild – at over 7 minutes in length, in builds up and breaks down like a piece of epic seventies rock. The same goes for the tipsy country-blues of ‘So Many Things To Decide’, a song about major life decisions and not leaving them too late, and the jazz and piano combo on ‘All Things Different’, and the urgent piano riff propelling ‘Left Like Roses’. They are sounds unfamiliar to Idlewild, who have always tended to work within a defined sonic palette. But they illustrate how they are straddling the familiar with the alien on Everything Ever Written, the unmistakable sound of artists comfortable with their identity.

With Everything Ever Written, Idlewild sound like a confident, mature band that are making the best of their situation, and thus successfully entering a third stage, an Indian summer, to their career. Their riotous early days and their commercial peak have long since gone, and with Make Another World and Post Electric Blues they struggled to really move on from that decline. But this new record is not only a most welcome return but one of their best, and certainly their most varied. (8/10)