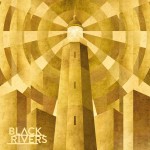 It’s been a long five years since Doves took a hiatus from their lengthy and successful career. The last twelve months has seen their frontman Jimi Goodwin release his critically acclaimed debut record Odludek, whilst it’s now turn of Doves family duo Andy and Jez Williams with the release of their new project Black Rivers. It’s unlikely that the brothers will repeat the success of their previous venture but their new project bears the hallmarks of where Doves left off, alongside an inspired electronic / psychedelic mix.

Opening track ‘Diamond Days’ is a perfectly polished nod to Pink Floyd with layered guitars and lifting chorus. There are certain similarities to Doves’ ‘Here It Comes’ but it’s certainly a positive. ‘Voyager 1’ is a particular stand-out track delving into space age psychedelic synths, surprisingly similar to Radiohead for those with an unfamiliar ear. Alongside this, ‘Harbour Lights’ is a tremendous, mostly instrumental piece with a layering of French spoken word. At a cross between Air and Stereolab, it immerses you and succeeds in highlighting the duo’s experimental and experienced musical pallet.

A few tracks go by and would probably benefit from Goodwin’s vocal input, but on the whole Black Rivers succeeds. It’s unlikely to pull up roots in the charts, however it is certainly a very welcoming and impressive debut. Upcoming tour dates with Elbow and Noel Gallagher will give them the opportunity to take the record straight to its natural audience, and a chance for gaining plaudits outside of the music press. Judging by this finely polished debut, they deserve it. (7/10)