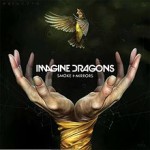 Front cover of ‘Smoke And Mirrors’

Having cast a huge shadow over the charts worldwide with ‘Radioactive’, which sold over nine million copies in the States alone and spent more than a year on the Billboard charts, Vegas-based quartet Imagine Dragons return with a second record. Normally, having such an enormous success under your belt makes it difficult to emulate that success in the future, as it becomes an albatross of expectation that ends up badly, for both artist and audience. Dan Reynolds and co. have sought to head off these potential difficulties by making Smoke And Mirrors even more Imaginary and Dragon-y than before.

In a way, Imagine Dragons are the distilled essence of alternative rock in 2015, a major label’s wet dream: a mammoth Trapper-Keeper of influences, expanding in all directions to suck in everything from EDM, folk, pop, rock, indie, hip hop and all manner of bleeps, samples and weird instruments in between. But as Rolling Stone put it, being mildly inventive isn’t the same as being good, and it’s a pity that what comes out of the ID machine sounds overbearingly earnest and mildly irritating in the same way that Nickelback do.

Things do start well with ‘Shots’, Reynolds’ reflection on his own tendency to self-destruction set to some pretty guitar pyrotechnics reminiscent of mid-‘80s U2. But things quickly slide into confusion with ‘Gold’, a muddy blend of indie, folk and arena rock that has no idea of what it wants to be. There are several horrendous moments of needless exhibitionism, such as the terribly titled ‘Hopeless Opus’ (really??) full of pitch-shifted vocals and wanky guitar solos, or the headache-y EDM screeches of ‘Friction’, or what appears to be an impersonation of Kid Rock on ‘I’m So Sorry’, which is absolutely unforgiveable.

Some better moments come in the form of the Mumfords / Lumineers / Civil Wars nexus ‘I Bet My Life’, a future single if ever there was one. ‘Polaroid’ is a densely produced approximation of Edward Sharpe & The Magnetic Zeros. But virtually every attempt at an expression of emotion, no matter how trivial, is hilariously overplayed, and invariably accompanied by skyscraping music and production. The mid-album appearance of ‘It Comes Back To You’ is welcome precisely because it’s understated, as is the hallowed piano ballad ‘Dream’.

Reynolds is a practising Mormon, which explains the vague, ever-present sense of spirituality to ID’s music and his seemingly constant appeals to some unnamed power or being outside of himself. “Show me a sign / Sweep me away /… / Dream maker, life taker / Open up my mind” goes the epically framed title track. “Pray for me brother / I need redemption / I’m just a man / A man on a mission / I want no trouble” he exhorts on ‘Trouble’. There’s countless instances besides – we’re not ones to ridicule the deeply held beliefs of others, but the zealousness of Reynolds’ delivery, particularly when you couple it with the group’s tendency to eagerly hit huge mounted drums on stage, is extremely off-putting and serves to eclipse everything else.

So, Smoke And Mirrors turns out to be an appropriate title – you come away with absolutely no sense of what kind of group they are. Their wide-eyed, heartland sensibilities are welded to every kind of fashionable music going – some Calvin Harris synth washes here, some Kanye beats there, some mellow Coldplay-lite melodies here, a little bit of Mumfords handclaps and ‘hey-ho’s thrown in for good measure… and you have an Imagine Dragons song. Despite the much wider array of instruments this time around, ID always use them to go for the obvious, never the subversive. Smoke And Mirrors is therefore foggy, cluttered and over-produced, a spectacle of empty sound with a lack of a coherent artistic vision. Which is a shame, because you do come away with the sense that ID have the songwriting talent to be an artistically credible outfit, rather than one that’s merely useful for soundtracking trailers, sports montages and adverts. But that all depends on whether you’re comfortable with your favourite bands advertising things. (4/10)