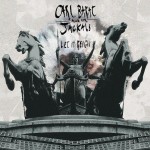 Front cover of ‘Let It Reign’

Carl Barât’s first solo album back in 2010 was a damp squib. Rarely acknowledged by the press, it was a squalid effort lacking in inspiration, something admitted by Barât himself. His post-Libertines solo career hasn’t worked out in the same way that bandmate Pete Doherty’s has – Dirty Pretty Things disbanded in 2008 having registered one minor hit. Five years after his career seemed to have fizzled, his fortunes seem to have reversed. A new Libertines album is on the way, in addition to a new solo project.

Let It Reign was always going to be overshadowed by the press having a field day over the re-kindled relationship of Pete ‘n’ Carl. Despite this, Carl ploughed on and auditioned musicians for his new backing band, which sees him stick to elements from his previous endeavours. Kicking off with the ferocious, Ramones-inspired opener ‘Glory Days’, Barât and The Jackals do little to distance themselves from the archetypal sound of The Libertines and Dirty Pretty Things. Tracks such as ‘Summer In The Trenches’ and ‘Victory Gin’ are timely references to the England of old, but its theme and heavy guitar riffs feel all too familiar.

Any real magic in the album derives from the lyrics, which highlight an honest and personal insight into Barât’s life. It is particularly notable that the tracks were written before the formation of the band, which does somewhat take away from the collective element of the group. Let It Reign is far from average, yet it isn’t really exciting either. It’s exactly what you would expect from a Carl Barât record: an all-guns-blazing affair full of heavy off-beat riffs with what seems like little connection to his bandmates. It’s a semi-satisfying release yet there are a few glitches. (6/10)