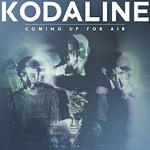 Front cover of ‘Coming Up For Air’

Boy, has Chris Martin got a lot to answer for. Irish ‘alternative rock’ quartet Kodaline, having found chart success with their brand of polished, radio-friendly pop-guitar ballads with their first full-length In A Perfect World, give us a follow-up less than two years later. But as with that, their second album Coming Up For Air must rank as one of the most egregious instances of musical mis-labelling in history. A cursory glance at the tracklist gives the game away – of its fifteen (fifteen?!) tracks that in total exceed an hour in length, the longest track is only 1 minute 5 seconds longer than the shortest (4:36 and 3:31), indicating both a cookie-cutter approach and a lack of invention when it comes structure. Indeed, Kodaline only have two basic song templates: the uptempo ‘indie-pop’ song and the lighters-aloft ballad.

Lead single ‘Honest’ opens proceedings, as the band seek to put their best foot forwards, with a tale of relationship turmoil set to anonymous-sounding ‘10s anthemic indie – in other words, a straight rip-off of their spiritual ancestors Coldplay’s ‘Paradise’. Two absolutely identical moments in the shape of ‘The One’ and ‘Autopilot’ follow it out of the traps, and you shudder in dread at the prospect of 55 more minutes of it. As it goes on there is, thankfully, at least some variation in the instruments used, but none in structure or dynamics, giving the strong impression that you’re simply listening to fifteen versions of the same song. You’ve got the acoustic guitar one with ‘Better’; the piano ballad one with ‘Everything Works Out In The End’; the sort-of-Bastille one with ‘Human Again’; the horrendous EDM-influenced twitches of ‘Play The Game’. The hack-tastic call and response chorus is absolutely hilarious, in a kind of ‘am I really listening to this?’ sort of way. Every single moment sounds like it’s the product of a focus group, where creativity, spontaneity and art have been micro-managed out of existence.

Furthermore, their lead singer and lyricist Steve Garrigan seems to write exclusively in clichés. Take ‘The One’: “you make my heart feel like it’s summer / when the rain is pouring down”. Or his paean to an ex on ‘Love Will Set You Free’: “if you’re ever feeling lonely / if you’re ever feeling down / you should know you’re not the only one”. Yet more insight on ‘War’: “there’s a war between my head and my heart / and I don’t know which side to take”. There is no poetry; no beauty; no souls are saved; nothing is at stake; everything is as cynical and mass-produced as a cheap Valentine’s Day card. This, combined with the homogenous music that’s several shades duller than beige, makes Coming Up For Air the early front runner for most boring record of 2015.

To go through the full list of lyrical and musical crimes on display would have taken too long, so that was merely a lowlights reel. Suffice to say, the prospect of sitting through the entire thing again has all the appeal of a hostage situation. In the interests of balance: a couple of half-decent moments do offer the faintest glimmer of redemption. ‘Coming Alive’ features a driving acoustic guitar rhythm, in the vein of Arcade Fire’s ‘Keep The Car Running’ or James’ ‘Sometimes’; the pounding ‘Human Again’ sticks out like a sore thumb on the basis that it at least tries to do something different, with its drum machines and basic synth pattern. The lyrics for both are still terribly formulaic, and the resistance offered by these two bright moments is nowhere near enough to withstand the deluge of mindless, arena-filling ‘alternative rock’.

Kodaline are the musical equivalent of the £4.90 pint of watered-down lager at the soulless phone company-sponsored venue. The lowest, most ubiquitous cultural artefact given a lick of paint, rebranded and marketed back to the listener as some kind of alternative, and at a higher price. And it’s everywhere: their iTunes page, their Wikipedia profile, their Allmusic entry… all defining them as ‘alt-’ or ‘alternative’. But in fact, Kodaline deal in exactly the sort of songs that ex-Boyzone members would use to kick off their solo careers in 1999 – empty boyband pop spun as modern indie anthems, substance-free gruel whipped up into calorific, nutrient-free confections.

Under normal circumstances, the correct response would be to ignore Kodaline, but not when it’s offered up as any of kind alternative. It’s a grave insult to those artists who genuinely carry the spirit of independence and creativity needed to label anything as an ‘alternative’. It’s difficult to even be angry at Kodaline – ultimately, they are a symptom, not a cause, of a wider malaise that began with Oasis at Knebworth, and continued through Travis, Keane, Snow Patrol and Mylo Xyloto. If you really like this sort of thing – all power to you, and ignore the mark we’ve given. But the next time you say to someone you’re into indie music and cite Kodaline as an example, don’t be surprised if you’re met with a blank stare. (1/10)