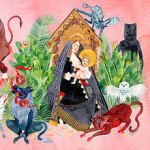 Front cover of ‘I Love You, Honeybear’

Former Fleet Foxes member Josh Tillman, a.k.a. Father John Misty, returns with I Love You, Honeybear, his follow-up to his 2012 debut record Fear Fun, the second under his latest moniker. The self-described concept record is more of a confessional, offering his revelations on love and life following his marriage.

This doesn’t make it a soppy record exactly, but it gives a very visual context to his lyrics, with an added sense of quirkiness. It is this aspect that seems to separate his Father John Misty material from his previous solo efforts. Putting the romance aside, there’s still plenty of heartache on the album. Lead single ‘Chateau Lobby #4’ is a swooping mariachi style ballad with a rather pictorial approach of the lead character losing his virginity.

‘Bored In The USA’ has an unconventional approach to piano balladry, filled with canned laughter and lyrics that provoke. However, it has a charming and warm quality similar to the observational qualities of Randy Newman and the fey romance of Jonathan Richman. The more you listen, the more you get out of the record. Tillman strides into an electro-pop orchestral in ‘True Affection’, whilst ‘The Ideal Husband’ treads into a more personal field with swooning vocals and incredibly intelligent, witty lyrics.

It is pretty hard to tell whether I Love You, Honeybear is supposed to be biographical, a glimpse through the smoke and mirrors into Tillman’s life, or entirely fictional. The clever wordplay and switching between narratives and character leaves the listener guessing whether he is in love, frustrated or both. What everybody will be able to agree upon, though, is that it’s a wonderful record and a step forward for Tillman as an artist. (8/10)