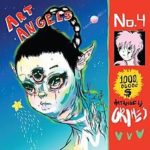 Claire Boucher, aka Grimes, has been going through a period of reflection over the three years since the release of last album Visions, a low-budget bedroom record of spectral synths that has had a seismic impact upon the sound of mainstream pop ever since. During this time, Boucher scrapped an album for being too “depressing”, but more importantly she wrote a song for Rihanna (‘Go’) that was subsequently rejected. After recording ‘Go’ herself and receiving a backlash from fans calling her a “sell out”, there was two ways Boucher could go: she could pander to her fans and release an abstract record like Visions or she could embrace her new pop sound. Thankfully, in Art Angels, she’s done the latter.

It takes just two tracks for Grimes to address the elephant in the room as Boucher confronts those who wrongly write her off as she sings “When you get bored of me / I’ll be back on the shelf” during ‘California’ – a reverse ‘California Dreaming’ which touches on the negatives of the state. Its unapologetic pop nature, with catchy layered melodies and a playful vocal, is what makes this such a good song and serves as a middle finger to those fickle fans who are now left in the dust, the message is clear; you’re either with Grimes or against her.

That’s not to say that Grimes has lost what made her so interesting as an artist and saw her signed by Jay Z as she remains on the peripherals of music. ‘Scream’ combines Django Django-like guitars with a scream reminiscent of Yeezus-season Kanye, all the while rapped over by the charismatic vocal of Taiwanese artist Aristophanes in her native Mandarin. ‘Kill V. Maim’, meanwhile, sees Boucher take the mindset of Al Pacino in The Godfather Part II, only this time as a gender-fluid vampire who can travel through space (of course), set to the backdrop of heavy guitars but offset with electronics and a typically offbeat vocal – a real album highlight.

Grimes is so at her best when she is bringing ludicrous amounts of elements together in a song that there is a brief dip in the album during ‘Easily’ and ‘Pin’ which is about as minimal as Grimes has ever been. However, this just provides a brief rest for the album’s final stretch, beginning with Janelle Monáe’s excellent vocal and thudding bass to provide an instantly catchy tune on ‘Venus Fly’; ‘Butterfly’ closes the album with many memorable hooks in its four minutes, giving the perfect end to an uncompromising pop record. Art Angels isn’t the dismissal of what brought Grimes to the dance, it’s an extra layer, a natural step into the outer reaches of the pop stratosphere and the result is a typically unorthodox style given a brilliant, hitherto unheard level of accessibility. (8/10)

Listen to Art Angels here, and tell us what you think below!