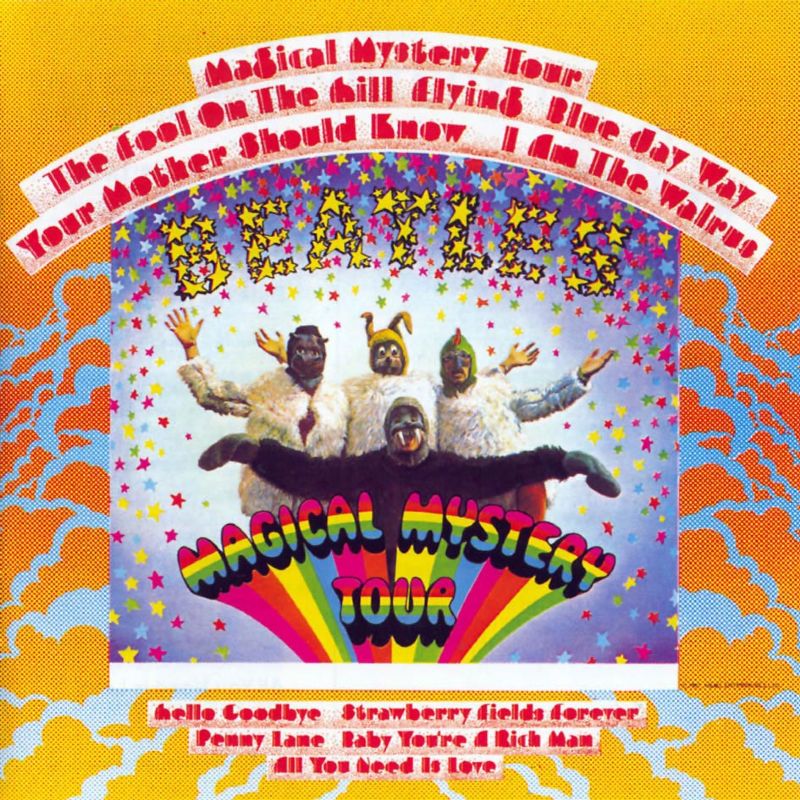 1967 was a crucial year in the story of The Beatles, both inside the studio and out of it, and for positive and negative reasons. The much-celebrated AA-side single ‘Strawberry Fields Forever / Penny Lane’ had arrived in February, trailing the legendary Sgt. Pepper’s Lonely Hearts Club Band that summer. The televised extravaganza that accompanied another classic single, ‘All You Need Is Love’, very soon after that made placed The Beatles at the forefront of the popular imagination at the height of the Summer of Love. On the surface, they seemed unstoppable.

However, following the death of their hugely influential manager Brian Epstein in late August, the Fab Four embarked on a number of questionable business and artistic decisions, which would eventually set the band at loggerheads and increasingly alienate them from each other.

The first of these mistakes was the commissioning of a third Beatles film, titled Magical Mystery Tour. It was intended as an understated experimental project with a travelogue theme. However, the project ran over-time and over-budget without the skills of Epstein at their disposal, and it became a frustrating and distracting ordeal when compared to the group’s previous film successes with A Hard Day’s Night and Help!

Specially broadcast by the BBC on Boxing Day, the film got a muted reception – though filmmakers like Martin Scorsese have sung its praises. In musical terms, however, the project was a success, and that was thanks to its accompanying six-song soundtrack EP, released at the start of December. Magical Mystery Tour was to be The Beatles’ final dalliance with psychedelia, signing off from 1967 with a flourish.

Freed from the demands of touring, The Beatles were able to record at will, and sessions for Magical Mystery Tour began at Abbey Road just weeks after Sgt. Pepper’s… had been completed. Two things happened during the lengthy, meandering sessions. The world premiere of ‘All You Need Is Love’ was broadcast live, with the group playing to an approximate audience of 400 million as part of an unprecedented worldwide television project; and the mercurial Brian Epstein passed away in August.

The concept behind Magical Mystery Tour was inspired by Paul McCartney’s trip to the U.S. in April where he met Ken Kesey and his troupe of Merry Pranksters who travelled the country in a multi-coloured van. As The Beatles did with Sgt. Pepper’s…, they fused this American psychedelia with a distinctly British twist – in this case, with the tradition of ‘Jolly Boys’ day trips to seaside towns that offered punters an afternoon on the beach followed by an alcohol-fuelled journey home.

Though the film project ended up being a slightly confused mess, its accompanying double EP soundtrack was essentially a continuation of the kinds of musical experiments they had been indulging themselves in for the last year, consisting mainly of laid-back and low-key gems rather than radio hits or album highlights. Only one of its six tracks really stood a chance at radio exposure, yet The Beatles’ faithful British fans lapped it up, with the EP selling more than half a million copies in the three weeks before Christmas, peaking at no.2 behind the band’s own contemporaneous single ‘Hello, Goodbye’.

Given that this particular era of The Beatles’ history is so strongly linked with John Lennon, it’s worth noting that only one of Magical Mystery Tour’s original six tracks was penned solely by him – even though it is ‘I Am The Walrus’, one of his most distinctive and distinguished works ever. Instead, the real star of Magical Mystery Tour is Paul McCartney, who wrote two of its six tracks by himself and had involvements in two others.

The title track, ‘Magical Mystery Tour’ is a rousing introductory piece to set up the concept of the EP, a thematic fanfare in the vein of ‘Sgt. Pepper’s Lonely Hearts Club Band’, in which McCartney and Lennon share lead vocals. We then get to the first of two McCartney tracks in ‘Your Mother Should Know’ – a weirdly old-fashioned dance routine kind of song suited to the stage more than a pop album. While it’s nobody’s favourite Beatles track, it illustrates how important British traditions were to their take on futuristic psychedelia, giving off the same kind of vibe as Sgt. Pepper’s… track ‘When I’m Sixty-Four’.

It’s then John Lennon’s turn to take the spotlight. Recorded in the aftermath of Epstein’s death, ‘I Am The Walrus’ is one of Lennon’s trademark Beatles songs, and scans almost like a brain-dump of caustic, absurd observations of the world around him. Full of venomous Lewis Carroll-esque lyrics about “choking smokers”, “pornographic priestesses” and “yellow matter custard dripping from a dead dog’s eye”, the imagery might be lysergically enhanced but there’s nothing peaceful or beautiful about it. It’s by far the most alienated and dyspeptic moment on an otherwise upbeat EP.

Paul McCartney’s excellent ‘The Fool On The Hill’ kicks off the second disc of the EP, and is one of his most sweetly melancholic masterpieces. Following in the tradition of “fools” in Shakespeare’s plays, the titular character is isolated from society and not understood by others, but turns out to have greater wisdom and insight.

The instrumental ‘Flying’ is a rarity in The Beatles’ catalogue, being one of the few instances of a track being credited to all four members of the group (rather than ‘Lennon/McCartney’ that often appeared as a standard). Composed with tape loops and overdubs and heavily featuring the mellotron, it’s a slowly percolating charmer that emerges as one of the EP’s highlights over time. Magical Mystery Tour then closes with George Harrison’s monotonic drone ‘Blue Jay Way’, the only wobble in what was a rapidly improving track record in songwriting terms going towards the end of The Beatles’ career.

The innovative ‘double EP’ approach was an absolutely lavish package for British Beatles fans. It was housed in a luxurious gatefold sleeve, featuring psychedelic artwork and a 28-page booklet that featured pictures and storyboards for the film and lyrics to the songs. At the time, EPs were decreasing in popularity and had often been used as ‘catch-up’ releases for previous singles, a money saver where an artist would offer three or four tracks in the same place to save money for new fans. Magical Mystery Tour was a rare instance of a band using the EP as a canvas with which to make a stand-alone artistic statement.

However, for Beatles fans in America, where the EP format had never really taken off at all, Magical Mystery Tour was packaged as a full 11-track LP, with the rest of the group’s 1967 singles plus ‘Baby, You’re A Rich Man’ bolted on to form a second side to the record – though for some unfathomable reason, Capitol saw fit to jumble up the original EP’s tracklisting for the first side.

These final five tracks, added on, are ordered in a rather artificially prosaic fashion, finishing off with the triumphant “love, love, love” blandishments of ‘All You Need Is Love’. Any album that finishes off with a song as cynically utopian as this is going to feel like a great one, as it’s virtually impossible not to get swept up in its glorious execution and its dizzying intertextual references to other musical traditions – and even other Beatles songs. That said, the American release of Magical Mystery Tour does admittedly serve as a decent one-stop-shop for the rest of The Beatles’ exceptional 1967 – it and Sgt. Pepper’s Lonely Hearts Club Band contain everything you need. Finally released in the UK as an album in 1976, newer fans now regard it as part of the official albums discography.

‘Strawberry Fields Forever’ and ‘Penny Lane’ are career-defining masterpieces that showcase the unique visions, talents and personalities of Lennon and McCartney respectively. The often unfairly criticised ‘Hello, Goodbye’ is the group’s secret weapon, an unremittingly sunny and infectious track. It was their final single of 1967 (and indeed, the last single to top the British charts in 1967, staying at the top for seven weeks) and a symbolic farewell to flower-power. ‘Baby, You’re A Rich Man’, whose Indian shehnai sound was created by Lennon’s use of the oboe function on a clavioline, was the B-side to ‘All You Need Is Love’ and echoed the peace and love sentiments of the era.

In musical terms, much of the lasting impact of Magical Mystery Tour is bound up with that of Sgt. Pepper’s… and the wider psychedelic scene of 1967, and is remembered in that context rather than in isolation. By itself, the EP doesn’t represent a new idea or the start of any real direction forwards – but then again it wasn’t conceived to stand alongside obvious conceptual pieces like Sgt. Pepper’s. It’s a receptacle for anomalies and little stand-alone ideas from the individual Beatles, rather than a group statement. Perhaps it’s an interesting thought exercise to think of Magical Mystery Tour as what The Beatles (aka. ‘The White Album’) might have sounded like if the group had stayed together as a cohesive unit rather than become estranged throughout 1968 – ideas explored collectively but with total freedom and unshackled from grander concepts.

Because of the differing nature of its release, British and American fans remember Magical Mystery Tour slightly differently to each other. Certainly in Britain, many younger fans would have experienced the EP as one of the first instances of music being used to create a different world, an introduction to music as imagination or escapism. Just like how we remember Disney films from our childhood, there’s something about Magical Mystery Tour that fits in with ‘Alice In Wonderland’ or ‘The Wizard of Oz’. That type of timeless entertainment crafted with commercial appeal in mind but also filled with wit and childlike wonder.

However, the legacy of Magical Mystery Tour can also be felt elsewhere, such as in the fields of film and television. The side-eye weirdness of ‘I Am The Walrus’ seems to presage the surreal but occasionally cutting satire of ‘Monty Python’s Flying Circus’, first broadcast in October 1969. The film itself is often thought of as an early precursor of the road-movie genre, despite its iffy reception from the wider public.

In any case, Magical Mystery Tour represents the end of a magnificent era for the world’s most influential band – their final flirtation with peace and love before making the conscious decision to go back to their rock’n’roll roots in 1968.

Listen to Magical Mystery Tour by The Beatles here via Spotify, and tell us what you think below!