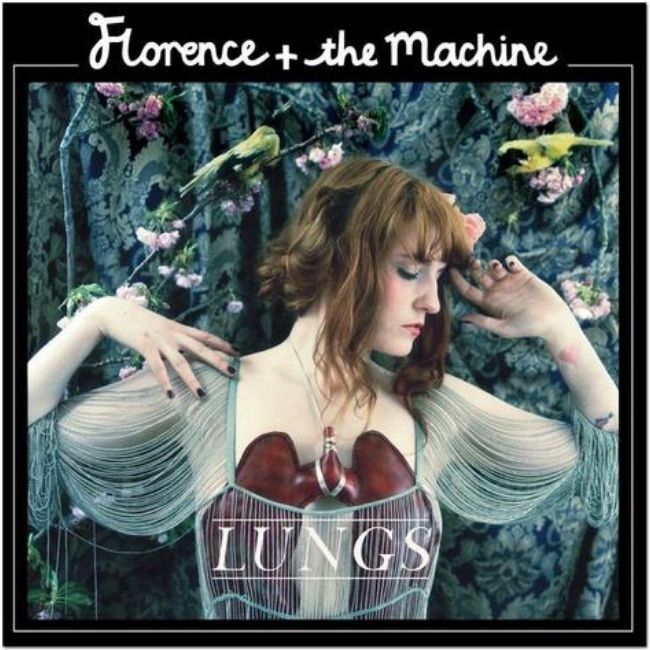 Big voice, big presence and big sound – the grandeur of Florence Welch and her Machine is something anyone who’s ever had a glimpse of her Hellenic and Victorian-inspired, bird-caged world is familiar with. Having experienced a slight shift of sound and levels of willingness to self-destruct, sung about in one of the most recognised voices of our generation, Florence & The Machine is a band that has gone from teen-spirited, doomsday goth-pop to underwater churches to the wide blue skies of California and then back to sophisticated calm. Their debut – the 2009 appropriately named Lungs ­– is as much teenage proclamation of heartbreak as it is a visual and sonic world of itself, where harps and lutes are as welcome as hip-hop beats. In front of it all is Florence Welch – the art school drop-out turned Britain’s favourite alternative banshee of music that’s as catchy as it is imaginative, largely inspired and led by the intuitive songwriting duo of Florence and Isabella Summers (the first official member of the Machine). Said to be an album that takes you somewhere you’ll never want to come back from by Sophie Bruce of BBC in 2009, Lungs is a timeless classic of genre-bending albums that sweep one up into themselves and leave a long-lasting impression.

Growing up in Camberwell, London, the daughter of an art historian and an “advertisement man”, the dyslexic and dyspraxic Florence spent most of her time climbing mulberry trees, reading books and singing in funerals as part of choir as a youngster. Having been in bands here and there as part of the South London music scene, cornering Mairead Nash – the promoter and DJ of Queens Of Noize at the Soho Revue Bar toilets in 2006 and singing her Etta James’ ‘Something’s Got A Hold On Me’ resulted in Florence getting herself a keen manager and pausing her art college studies. Having briefly worked with Dev Hynes, now better known as Blood Orange (previously Lightspeed Champion) and plunging into being a front-woman for Ashok, in the span of those three years Florence pursued a different type of pop that finally felt right with her friend producer Isabella Summers, and, after a few years, the dramatic, grandiose, peculiar mix of soul, gospel, garage rock and simply good old popular music took form in Lungs.

Having been highly anticipated as Welch received a Critic’s Choice award at the BRITs, previously awarded to that titan of heartwrenching pop Adele, the album did not disappoint the masses, as it debuted no.2 in the British charts – right behind Michael Jackson after his sudden death. Pegged as art rock, goth pop and something as abstract a term as baroque pop, Lungs became the unexpected soundtrack of British summer that year, Florence & The Machine playing Reading and Glastonbury, performing memorable sets where steel constructions were scaled in high heels and hot pants.

Florence & The Machine were a heavily visual band right off the bat. Florence Welch being attracted to the aesthetics of her mother’s studies – especially Renaissance art – and the gaudiness of the Victorian era, both the fashion and the stage décor (as well as the album art itself) of Florence & The Machine was an eclectic mix that was pleasing to the eye, if a bit macabre at times. The bird cages, the paintings, paper flowers and floor length dresses as well as the painted face glitter added to the already acute sense of drama to the live performance of Lungs. Florence flinging herself into the crowd both successfully and unsuccessfully at times (crowdsurfing doesn’t always end well) after wringing every drop of emotion out of herself through unbridled singing with that banshee voice of hers that pierces and lifts one up as well as running and twirling about on stage, dripping gold glitter on her cheeks as if she’s crying the stuff  – it’s all very excessive and all very exciting.

The stunning Victoriana at the end of the noughties was strong in all matters of Florence & The Machine. The pre-Raphaelite-inspired album cover shows a posed Florence in a 1920s style Emma Cook dress, head down and arms half up, bird and cage motifs abound as a blood red lungs necklace-corset made by The Maccabees’ frontman Orlando Weeks hangs on her chest. It’s elegant, maybe a tad too submissive when one thinks of the sort of emotionally distraught storm Welch cooks on the album tracks, but memorable to say the least.

A similar whimsical yet macabre aesthetic follows Florence in her music videos. The nymph-esque and Hellenic ‘Rabbit Heart (Raise It Up)’ where a sort of Mad Hatter tea party goes awry, full of references to both Ophelia of Hamlet and the mythological King Midas is probably the closest one look-wise to the cover art. ‘Dog Days Are Over’ looks a bit more like modern avant-garde fashion meets tribal imagery and ‘Drumming Song’ sets the thematic religious stones for the progression into the more gospel sound of 2011’s Ceremonials with Florence and her nun coven exorcizing whatever’s left of the demonic love she’s singing about.

Not everyone took upon Florence’s kooky imagery with open minds. Her playfulness during interviews wasn’t always received as positively, as the age of hipsters and pretentious affectations was upcoming, and Welch’s shy and slightly posh way of speaking with heaps of fairytale references at times got interpreted as a meek attempt at being ‘kooky’ and unique, therefore relevant and new.

Stylistically varied yet thematically concise and lyrically impressive, Lungs is a collection of songs through which the thread of self-destructive devotion and burning feeling runs less than subtly (that not being a necessarily bad thing). There is little doubt in the way Florence Welch sings about the whirlwind emotions that wrung her love and continue hitting with whiplash in the most casual of situations. As a lyricist, Welch is poetic with reason and without it, everything she sings about on Lungs being wrapped around in a sheet of despair that translates from the primal, maybe even pagan imagery fuelled by literature references and the aim to put across the intensity of a feeling in the most potent way. Having said that she creates little environments both in her life, her stage décor and her music lyrically and sonically, Florence keeps up her promises as each song of hers has a very specific feel to it as well as strong visual associations.

The anthemic ‘Dog Days Are Over’ is a triumphant, frantic run without any intention to stop, ready to bash one’s head into the happiness that’s oncoming after the long period of sadness – them dog days. Handclaps and harp together sound surprisingly tasteful, and this frenzy of a song stormed the charts as well as raked up quite a bit of synchronisation royalties as it was used in a handful of soundtracks. ‘Rabbit Heart (Raise It Up)’ is wishful and dreamlike, the harp strongly present, the shimmering, almost effervescent instrumental accompanying the contrasting symbolism of the hare, the lion and the lamb, as Florence plays up the theme of sacrifice and standing up for oneself: “This is a gift, it comes with a price / Who is the lamb and who is the knife? / Midas is king and he holds me so tight / And turns me to gold in the sunlight”.

‘I’m Not Calling You A Liar’ is a grower of a track, decorative in its sound as well as quizzical in its lyrics, confronting a lover and asking to treat them right as an ex has wronged them, their presence haunting them. “There’s a ghost in my lungs / And it sighs in my sleep / Wraps itself around my tongue / As it softly speaks / Then it walks, then it walks / With my legs / To fall, to fall / To fall, at your feet”.

It’s not surprising that ten years later Florence Welch has released her book of lyrics to the public, sketches, original versions and her poetry dispersed throughout – the 22 year old at the time wrote lyrics more imaginatively than most pop songwriters do throughout their lucrative careers.

‘Howl’ marks a slight stylistic shift, turning up the sense of the apocalyptic, singing of clawing your lover’s chest to taste their beating heart, but ‘Kiss With A Fist’ takes a sudden turn as Lungs dips into garage rock. The influence of Welch’s contemporaries The White Stripes is strong and present, as she questionably likens the intensity of love to two-way domestic violence. The gaudy Ludes cover ‘Girl With One Eye’ is probably the most macabre of the bunch, threatening to cut a girl’s eye out for wronging the singer as the blues-y guitar with its honest lewdness swaggers with confidence, in cat-like manner whilst Florence really lets her pipes go nuts.

The hip-hop inspired ‘Drumming Song’ is the way it is because Welch apparently sucks at most instruments as well as having done most of the songwriting for Lungs with little to no equipment, hence the beat of the song being born out of banging walls and metal trays. ‘Between Two Lungs’ narrates the possibly tender moment of exchanging breath whilst kissing your loved one, and the twinkling ‘Cosmic Love’ gets back to heavy drums after taking a break with the aforementioned track. ‘My Boy Builds Coffins’ is more conventionally indie, a nostalgia tinged guitar melody and a steady beat letting the signature harmonic vocal layering of Welch take front stage. ‘Hurricane Drunk’ follows suit, exhibiting yet another emotionally extreme aspect of Welch as she pledges to drink oneself to death after seeing her lover with another person. It’s a surprisingly sunny track in sonic terms, however, warm and inviting after the generally dark and morbid, even though ornamented with the intrinsic harp parts, main body of Lungs. The penultimate ‘Blinding’ gives us the last taste of the latter, and the famous Candi Station cover of ‘You’ve Got The Love’ ends Lungs on an, again, surprisingly uplifting note, bound to become a club banger of the indie crowd.

The first official staging post in the Florence & The Machine career, Lungs was one of the main musical exports of Britain in 2009, alongside the electro pop of La Roux, escaping the Amy Winehouse vs Lily Allen trope of the pop world of the time as discussed in various reviews of the album, which praised Florence for such a feat. The grandiose, almost church-like sound that Florence generated also fed into the Big Music trend of 2009 as discussed in a Pitchfork feature, as fake and honest portrayals of spirituality became a commodity in the pop world to inspire feelings of community and sell more stadium rock tickets (*ahem* Coldplay *ahem*). Now, ten years later, it’s still one of the most memorable debut albums of the decade, surprising in its diverse style yet aesthetic fluidity, presenting Florence Welch as a fully formed, new pop icon of the 21st century, ready to be devoured by the masses of listeners craving a different type of fix in the well-trodden path of breakup albums.

Listen to Lungs by Florence & The Machine here via Spotify, and tell us what you think below!