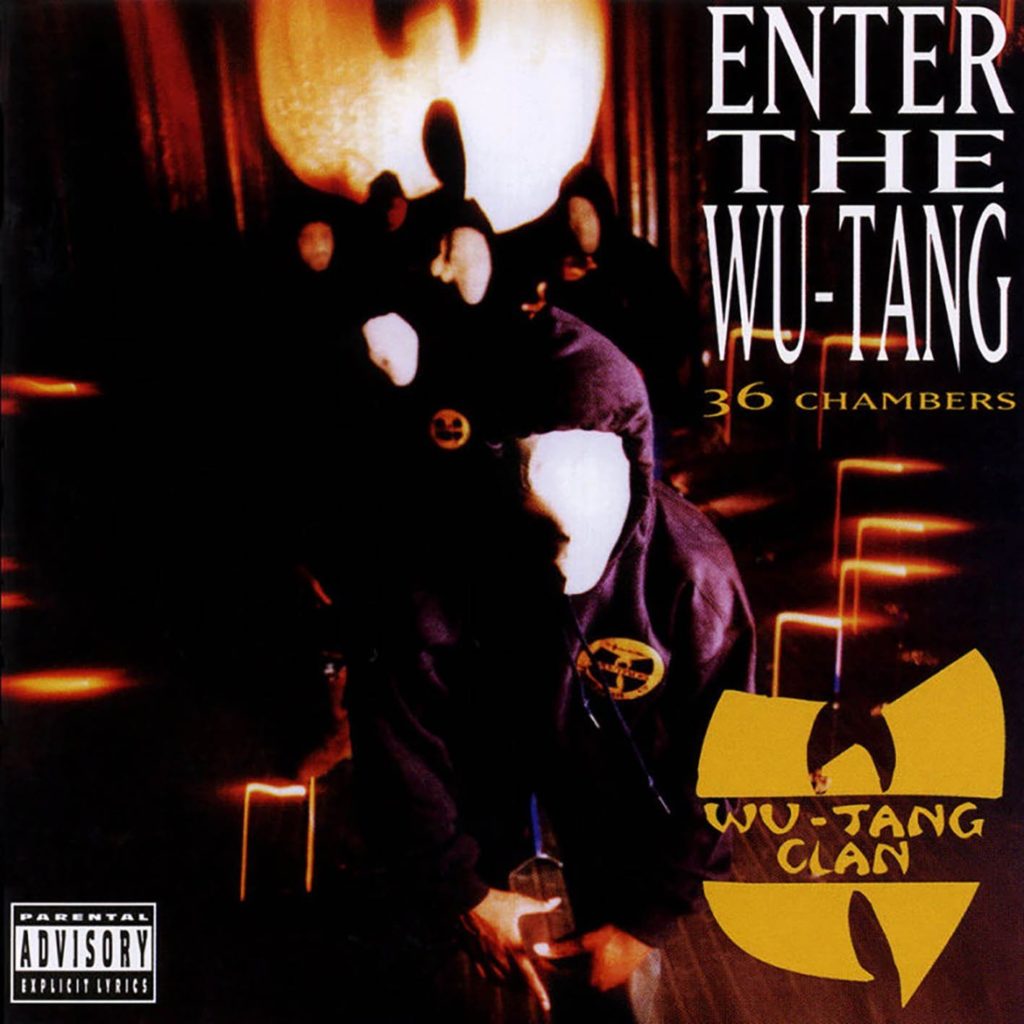 The binary, East Coast vs West Coast paradigm of thinking about Nineties hip-hop may have been popular but was too restrictive. Not only did it discount the burgeoning Southern rap scene, personified by the likes of OutKast, but it also didn’t take into account the presence of complete outliers like the Wu-Tang Clan. The New York collective were less a rap group than a kind of musical equivalent of an extended cinematic universe, a nine-strong squad of MCs and producers whose galaxy of solo albums, in addition to body of work from their parent group, represents almost a sub-genre of hip-hop unto itself.

Essentially, Wu-Tang Clan formed around the nucleus of Gary Grice (GZA), Robert Diggs (RZA) and Russell Jones (Ol’ Dirty Bastard), who had worked together since the late Eighties. Each individual had found some limited success in the rap game, but all found themselves dropped by their record labels (RZA even at one point making an album on De La Soul’s Tommy Boy label). However, with renewed focus in the face of their disappointment, the group really took shape when they joined forces with fellow Staten Island rapper Dennis Coles (Ghostface Killah).

The rappers decided to create a hip-hop group whose ethos would be a blend of “Eastern philosophy picked up from kung fu movies, distorted Nation of Islam preaching picked up on the New York streets, and comic books. They were soon signed, but because of an extremely limited budget, the group was only able to record in a cramped, inexpensive studio at The Hit Factory; with up to eight of the nine Wu-Tang members in the studio at once, the quarters were frequently crowded. To decide who appeared on each song, RZA made Wu-Tang rappers battle with each other on the mic. This competition led to the track ‘Meth Vs. Chef’, a throwdown between Method Man and Raekwon over the rights to rap over RZA’s beat – a track that eventually surfaced on Method Man’s 1994 debut album Tical.

Produced entirely by the group’s de facto leader RZA, the centre of the hive mind, Enter The Wu-Tang utilises gritty, concrete-hard beats and achieves a ghostly atmosphere through snatched, echoing soul samples and martial-arts movie clips. Clipped, single-note chunks of piano and bass characterised its minimalistic sound, and Wu-Tang Clan refracted the traditional male braggadocio of existing hip-hop through an entirely different lens, away from the guns, drugs and bitches into something a lot more existential and philosophical while still feeling like an escape hatch from reality. Their lyrics set a new standard for hip-hop in the Nineties, just at the time when the genre was dominated by the jazz-influenced styles of De La Soul and A Tribe Called Quest, the Afrocentric wokeness of Public Enemy, and the commercial explosion of West Coast gangsta-rap.

Among the large cast of rappers, some, like GZA and Ghostface Killah were skilful lyrical craftsmen, telling cerebral and thoughtful stories with laser precision; other, most memorably Ol’ Dirty Bastard, were almost cartoonishly outsized personalities who gave proceedings that slightly bizarre, off-kilter edge. During the intermission at the end of the fifth track, Method Man breaks down each member’s individual skills for an interviewer, before noting “we form like Voltron” when Wu-Tang Clan comes together, and it’s this leviathan aspect that makes Enter The Wu-Tang such a compelling album to revisit – each member’s skills are in the service of the bigger whole, making their combined skills greater than the sum of their parts.

The fresh, inventive rhymes and gritty flows of the team of talented MCs would have been enough for Enter The Wu-Tang to be lauded on its own, but what truly makes it a significant milestone was its lo-fi production, which helped bring the grimy menace of the underground to the mainstream, in turn reviving the East Coast hip-hop scene that had recently been eclipsed by the N.W.A./Dre/Snoop gangsta-rap phenomenon on the other side of the country. RZA complemented his band-mates’ lyrical performances with lean, menacing beats that evoked their gritty reality just as effectively, making a two-pronged assault of words and music to bring their reality to life.

The real brilliance is that Enter The Wu-Tang manages to be both authentically real, depicting a life of hustling and survival, but escapist as well, with just the right amount of bizarre, incongruous elements thrown in, from treated samples to snatches of kung-fu movie dialogue to the members’ highly inventive lyrics, to give proceedings a sense of heightened or blurred reality.

Take the opening salvo of ‘Bring Da Ruckus’, featuring snatches of dialogue from 1981’s Shaolin Shadow Boxing and Ghostface Killah’s indignant, rabble-rousing hollering set to dry, arid beats and blasts of horns. The sound may be slightly tinny and grimy, something reflecting the circumstances of its creation, but that under-finished feeling lends it a certain samizdat punkiness, and makes listening to Enter The Wu-Tang feel like you’ve got your hands on something circulated via bootleg without the knowledge of the authorities.

Elsewhere, things are much grittier and starker, more directly devoted to the arts of MC’ing. ‘Protect Ya Neck’, one of the very first Wu-Tang recordings, is the album’s purest and most distilled moment. Featuring eight of the group’s nine members on the mic, it’s essentially a free associative battle-rap committed to tape. You can practically feel the harsh chill of a New York winter in the spindly minimalist ‘Da Mystery Of Chessboxin’’, and the creeping piano notes on ‘Wu-Tang: 7th Chamber’ gives the track a nightmarish, claustrophobic feel, and a certain cinematic noir that’s just as much down to the sparse, quieter arrangements. The existential reflections of ‘Can It All Be So Simple’, with its spooky Gladys Knight sample, shows the introverted, intelligent side of the Clan, whereas the sample-dense ‘Wu-Tang Clan Ain’t Nuthing Ta Fuck Wit’ shows that RZA and his crew can also do party-starting maximalism and braggadocio, just like much of their peer group.

‘C.R.E.A.M. (Cash Rules Everything Around Me)’, with its haunting piano riff sampled from The Charmels, is one of the very best hip-hop tracks of the decade. While it pays lip service to the stereotypical hip-hop lifestyle of hustling, with its refrain of “dollar dollar bill y’all”, it’s not portrayed as a life of glamour, but one of cold hard necessity and brutal survivalism. Raekwon and Inspectah Deck lay down uncomfortable home truths, both defending their choices but regretting having had to make them (“It’s been twenty-two long hard years, I’m still strugglin’ / Survival got me buggin’, but I’m alive on arrival”).

While the general ethos of Enter The Wu-Tang is one of tag-teaming and collaboration, two tracks serve as showcases for just one of the rappers. The hard-hitting, Melvin Bliss-sampling ‘Clan In Da Front’ is GZA’s time to shine, and the taut, tense ‘Method Man’ needs no explaining! But the other members, though they don’t get to soak up the spotlight for an entire track, all dazzle in their own right. Inspectah Deck and U-God are rugged and raw; while he only gets one track, the comparatively junior Masta Killa hones his skills to perfection; Raekwon and Ghostface Killah bring intelligence and get reflective and philosophical; and the unhinged mania of Ol’ Dirty Bastard, which he would go on to develop over his solo career, has to be heard to be believed.

Even looked at from the distance of a quarter of century, there’s a certain purity to Enter The Wu-Tang that the group never achieved again, something that’s partly down to the widening and deepening of their template that came with their individual members’ solo careers – Raekwon’s Only Built 4 Cuban Linx and GZA’s Liquid Swords being just the very best of these – but also because of the context of its creation. While they later became superstars, their debut was made in down-at-heel circumstances and with a coherent, collective vision that’s so rare it’s like bottled lightning.

Despite the uncompromising, raw sound that RZA and the crew achieved, and the consequent lack of radio airplay in the days before the widespread availability of the internet, Enter The Wu-Tang was a significant underground hit, selling 30,000 copies in a week and hitting no.41 in the United States. Just over a year later, it had gone platinum, and to date has sold well over two million copies. 1997’s long-awaited follow-up Wu-Tang Forever, a sprawling double album, shot straight to the top of the Billboard albums chart but its impact was often diluted through outstaying its welcome. Ever since, Wu-Tang Clan has only operated sporadically, with each subsequent album receiving lower and lower sales figures, although 2000’s The W contained the group’s first proper world-wide chart hit in ‘Gravel Pit’.

But that comparative decline can never eclipse the sheer impact of Wu-Tang’s debut album. If the evolution of any genre can be conceived of as a spider diagram, then Enter The Wu-Tang (36 Chambers) represents the growth of an entirely new leg out of the central body of hip-hop. In describing Enter The Wu-Tang as “the sound of accidental fame”, guest Pitchfork writer Rollie Pemberton encapsulated the Wu-Tang Clan appeal perfectly in 2006:

“Something as unique and unusual as this record isn’t supposed to find itself at the height of commercial viability; it’s supposed to smoulder underground, hidden from the view of mainstream America, who surely would not be ready for such a challenge. But America was ready, in part because this one challenged convention, not listeners. Sure, its sloppy drum programming, bizarre song structures, and unpolished sound quality disturbed commercial rap purists, but the talent was so inherent and obvious, and the charisma so undeniable, that it propelled the Wu-Tang Clan to the height of the rap game, and today stands not just as the hip-hop classic that introduced the concept of obscure thematic characters (each member’s name references old kung-fu movies), but also bridged the gap between traditional old-school sensibilities and the technical lyricism of today.”

Listen to Enter The Wu-Tang (36 Chambers) by Wu-Tang Clan here via Spotify, and tell us what you think below!