WOMEN IN ROCK no.2: PJ Harvey 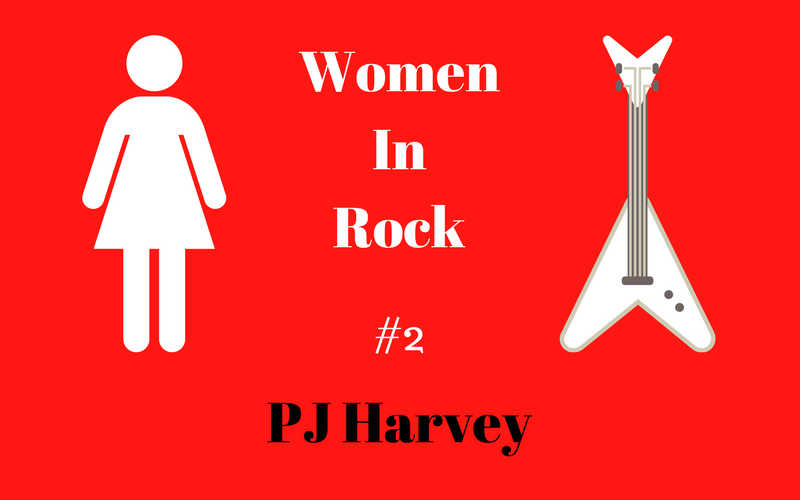 PJ Harvey first emerged onto the scene in 1992 with her debut album Dry featuring explosive singles such as ‘Dress’ and ‘Sheela-Na-Gig’. Now with an impressive 11 albums behind her, most recently The Hope Six Demolition Project released in April 2016, and Dry approaching its 25th anniversary, she has been awarded for her Outstanding Contribution to Music at the NME Awards and even received an MBE in 2013 for services to music. This month’s profile will reflect on her amazing career so far, and the enigma that is Polly Jean Harvey.

Born in Bridport, Dorset in 1969, and raised on the family’s farm, she was exposed at an early age to blues and folk, particularly Bob Dylan, by her music-loving parents. Harvey’s first musical endeavour was in folk trio The Polekats, who performed in local pubs. She later joined the Somerset-based Automatic Dlamini where she played saxophone, guitar, and contributed vocals. She enjoyed more success with Automatic Dlamini than The Polekats and toured Europe twice. During this time, she also appeared on the chorus of Grape’s (another local band) ‘Baby In A Plastic Bag’ and contributed backing vocals on Bristol-based The Family Cat’s ‘Colour Me Grey’. But eventually Harvey grew tired of playing other people’s songs and moved to London to pursue a course in Sculpture at Central Saint Martin’s, and it was here, in 1991, that she began performing under the name PJ Harvey.

Throughout her career, PJ Harvey has often been named as quite a controversial figure. In a 1995 interview with NME she stated that, “people think I’m some axe-wielding bitch cow from hell”. When she released Dry in 1992 she used ‘decadent, dark humour to attack expectations of women through her dissection of love and sex’. Through clever lyrics, her unmistakable voice and guitars that go back and forth between smooth and sexy and intense and confrontational (and sometimes both at the same time), Harvey brought about a completely fresh female voice, both musically and in her perspective, to British indie-rock music in the early ‘90s.

Confrontation is a common theme of PJ Harvey’s music, but the execution of each album is never the same. In later albums, such as 2011’s Let England Shake and 2016’s The Hope Six Demolition Project, she has been criticised for her ‘non-committal political stance’. But this is not necessarily to say that her work is lacking this confrontation in any way, it could be said that these albums and lyrics have been written from a more mature perspective and style. Harvey once claimed that she could not write anything political as she was not ‘intellectual enough or confident enough to understand global themes’, however in Let England Shake she explores a history of England’s bloodshed whilst sounding folky and whimsical, and in the politically-charged The Hope Six Demolition Project she reflects on what she has seen whilst travelling around Kosovo, Afghanistan and Washington.

While these albums don’t sound as raw and angry as Dry or Rid Of Me, it is important to acknowledge that these albums came two decades later. While Harvey may not necessarily be solving the issues that she is exploring in her later albums, she still confronts them, encouraging the listener to come to their own conclusions.

PJ is not only an iconic artist, but also an iconic female in the music world. Although in the past she has denied being a feminist, her music subverts typical gender stereotypes and punches you in the face – while she remains unquestionably and uncompromisingly feminine. Harvey during Dry and Rid Of Me could be seen as our British parallel to the American Riot Grrrl movement. Claire Marie Healy notes how “Harvey took all the markers of restricted femininity and subverted them – taking them to draggish extremes that challenged the male gaze and asked it, is it what you desire?” and states that girl power belonged to the Spice Girls; woman power belonged to PJ Harvey. Her appearance is just as bold as her music. Who can forget her iconic blue eyeshadow and red lips against her pale skin and jet-black hair.

Aesthetically and musically she has always stood out from the crowd, in a manner that is always present and often threatening. For example, in her video for ‘This Is Love’, where she stands in a white room with her guitar, legs apart, staring and singing straight into the camera. She appears incredibly sexy but incredibly tough: untouchable. Or in ‘Down By The Water’ where she lures you in while dancing in a red silk dress, but she’s luring you in like a siren, she’s luring you to your death.

In her 25-year career, PJ Harvey has gained a status similar to artists such as Kate Bush and Patti Smith. She’s never quite been accepted into mainstream culture, though it would seem this was never her intention in the first place, but she is an eccentric musical anomaly who is treasured by all that know her. Her music is both brutal and beautiful and completely captivating. Once it has been heard, it can never be forgotten. It’s deeply personal but never seeks answers, and never sounds empathetic, Harvey just pours emotion out into the world and leaves us to come to terms with it.

Check out our ‘Introduction To PJ Harvey’ playlist over at Spotify!