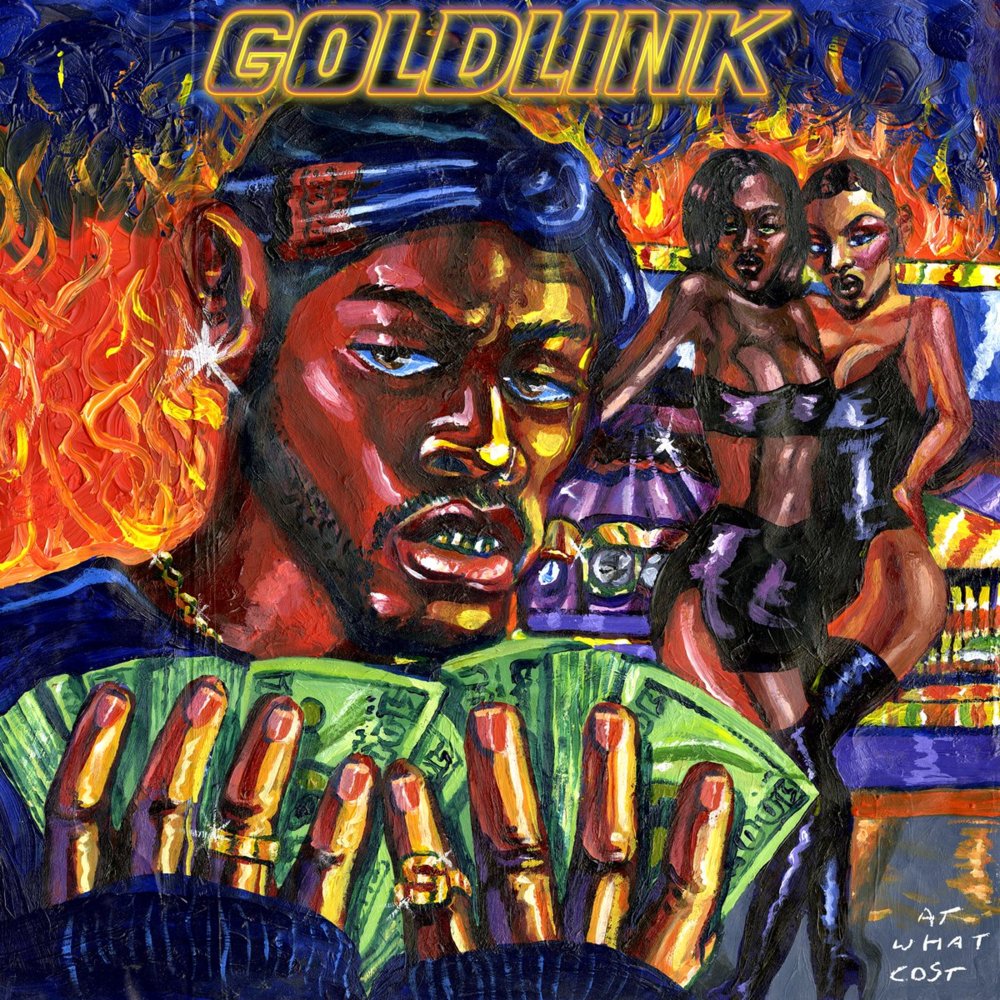 After two acclaimed mixtapes, GoldLink makes his major label debut with the solidly enjoyable ‘At What Cost’.

D’Anthony Carlos, known by his stage name Goldlink, gained favourable attention back in 2014 with his mixtape, The God Complex. By 2016, Goldlink had been named a member of the 2015 XXL Freshman Class alongside Vince Staples. He had also worked with the likes of Kaytranada, BADBADNOTGOOD, Anderson .Paak and Isaiah Rashad. Despite releasing his second mixtape, And After That, We Didn’t Talk and a record deal with RCA, he remains an unknown underground gem, fluttering over synths and BPMS unknown to the rap industry.

At What Cost is Goldlink’s first effort at a full-length debut album, we see him adopt the technique of genre fusions, featured in his previous mixtapes, to paint a sonic portrait of his home city, Washington D.C. His musical influences are also a prevalent part of the album’s soundscape, for example, ‘Hands On Your Knees’ is a throwback to old school hip-hop, the track is predominately Kokayi’s vocals, acting as MC on a ’70s-style dance beat, the song intertwines vocal samples of an audience, to make the record mirror it’s early hip-hop predecessors.

The lead single ‘Meditation’ also uses vocal samples, concluding on gunshots, an introspective criticism of the project’s violence. The song is itself is constructed from Kaytranada’s TRACK UNO, and guest features Jazmine Sullivan on a chorus describing unrequited love, and a hook heavily influenced by the gospel song, Shake the Devil off by Dorothy Norwood. ‘Have You Seen That Girl’ is a homage to ‘80s R&B and pop, led by electro keyboards and girl group-esque vocals.

Conceptually, the album is a reflective tribute to GoldLink’s life in D.C. and DMV, at no point is the listener allowed to forget. ‘Herside Story’ is a standout example of this, although the song samples Dublin hip-hop trio Hare Squead’s chorus of “Whenever the sun don’t shine on the west side / You know I’m sitting pretty right by your side”. GoldLink’s verses tie the song into a love song to an old love from his home city, he even proclaims himself “Wild nigga from the wild side / DC nigga so I’m real dry”. ‘Summatime’ uses a stripped back, West Coast influenced beat, as well as a guest feature from DMV native, Wale, to describe GoldLink’s time in California. GoldLink said in an SFWeekly interview that “When I was in senior year of high school, my mom lost her job, we lost our house, and we had to move in with my uncle and my aunt”, the song is a confessional description of his behaviour as a misled youth in California, it opens with a sung introduction by the Radiant Children of “Young man, you’re a goner / Caught up in California / You’ve been lookin’ for gold / But there’s nothin’ to hold”.

At What Cost sees GoldLink at his strongest when he is storytelling, and songs where he utilises this ability, even with his quick vocal pace, are his most hard-hitting. Tracks where he deviates from this such as ‘Kokamoe Freestyle’ or ‘Crew’ are slightly weaker, but the sonic storytelling that runs throughout the duration of At What Cost makes it an enjoyable 48 minutes. (7/10) (Benita Barden)

Listen to At What Cost here via Spotify, and tell us what you think below!