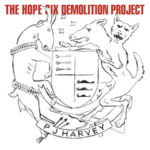 The astonishing and quite unexpected success of Let England Shake, arguably the finest album of the decade so far, not only brought PJ Harvey back to her core fanbase after a number of years but also allowed her to access a hitherto unheard-of level of international publicity for an indie star. Suddenly, the modest, thoughtful and resolutely un-rockstar-like Polly Jean, used to lapping up the critical praise but little else, and her masterful album were the subjects of think-pieces in national newspapers when it won the prestigious Mercury Music Prize in 2011 (which also made her the only artist to have won it twice, after 2000’s Stories From The City, Stories From The Sea). As the NME reviewer at the time wrote: Hemingway has the war novel, Coppola has the war movie, and PJ Harvey has the war album. Stark, deeply affecting and so haunting and urgent it was impossible to ignore, it was a truly stunning return to form after the flat Uh Huh Her and the divisive White Chalk over the previous decade.

The afterglow lasted a long time, and it’s surprising to think it’s now been over half a decade since Let England Shake was released – already by far the longest gap between PJ records – but it existed in the public consciousness long before its February 2011 release. Remember that Polly performed the title track nearly a year before that on the ‘Andrew Marr Show’ in front of the then-PM Gordon Brown, in one of the most dignified and pointed live performances of recent times. So the success has rightly given Harvey cause for serious consideration, planning her next move carefully. Casually acquainted fans will be demanding more of the same, but her older devotees know about how many different types of great album she’s made over the last 25 years. Plus, how on earth do you begin to follow up something as brilliant as that?

What she’s eventually given us is The Hope Six Demolition Project – or, as Laura Snapes’ review in Pitchfork quite accurately summed it up, ‘Let America Shake’. Where its predecessor dealt with the bloody legacy of English and European imperialism, this focusses on the undead concept of American exceptionalism, not only in foreign policy but economics too, and the neo-conservative zeal to rush in and act in a series of quick fixes with no regard to long-term planning. Nominally, it’s a multimedia endeavour, spanning poetry (a collection called ‘The Hollow Hand’ was published last year), a photographic exhibition and a feature-length documentary movie due to come out before the end of 2016. Based around Harvey’s memories from her trips to Kosovo, Afghanistan and Washington, it comes across as a mixture of journalism and rock music that isn’t always successful in its aims, but whose processes are enthralling nonetheless.

Essentially, it sees Harvey rediscover her latent gift for the blues and other American roots music, given to her by her parents’ record collections, while tempering that with various influences from the rest of her discography, creating an intriguing sonic compound in the process. John Parish, a sometime outright collaborator with Harvey (on two joint albums in 1996 and 2009 respectively) and also a permanent member of her band since 2007, makes his presence felt as a kind of utility member, filling in on all manner of various instruments outside of the regular guitars, drums, sax rubric and giving TH6DP its unusual texture. This, mixed, with Harvey’s beguiling and sometimes contradictory presence in these songs, may make it imperfect but also mean that it’s another distinctive instalment in Harvey’s exceptional catalogue.

On the surface, there’s a lot more musical variety than the very streamlined and economical structures of Let England Shake. The raw blues feel of ‘The Ministry Of Defence’, with its growling, one-note riff, the distorted brass of ‘Chain Of Keys’, and the blaring, atonality of ‘The Ministry Of Social Affairs’, with its delta blues sample of Jerry McCain’s ‘That’s What They Want’ set to skronking sax, all have the same kind of ingenuity as Radiohead’s ‘00s albums in their willingness to match seemingly foreign elements with each other. The barrelling, skipping beat of ‘A Line In The Sand’ revisits the musical territory of this record’s predecessor, combined with Harvey’s spooky, high-register tone last hard on White Chalk. The terrific lead single ‘The Wheel’, which has been in the public arena since January, is a stunning mix of folk, garage rock and jazz that registers as another career highlight. On this track, Harvey truly grasps the nettle, with the “now you see them, now you don’t” critiquing the West’s tendency to experience conflicts and disasters around the world in the context of news cycles.

Another consistent highlight of TH6DP is Harvey’s vocal range, which is explored fully and at various points touches base with a lot of other albums in her catalogue. The broken paranoia of Is This Desire?, the full-blooded passion of her other great American album Stories…, the fuck-you attitude of Uh Huh Her are all evident in various places. The best moments are when she marries this approach with slow-paced curveballs – the smouldering, ambiguous ‘River Anacostia’ and the breathtaking collage of jazz and field recordings on closer ‘Dollar, Dollar’ are the best examples. The latter seems to take place from the perspective of a Westerner walking through an impoverished area, overhearing conversations and pleas for spare change, as is much more powerful for not really saying anything at all except descriptive fragments like “face pock-marked and hollow / saying dollar dollar”. It’s in moments such as this that the themes of TH6DP are to be found.

Some less strong moments come with the folky ‘Near The Memorials To Vietnam And Lincoln’, whose hookline consists solely of chanting the song title over and over again. Hardly groundbreaking stuff, and redolent of a rare lack of inspiration for Harvey, sounding like it was left unedited from a jam session in the context of last January’s famous recording sessions, that took place in front of a public gallery with a one-way mirror between artist and audience. ‘The Orange Monkey’, touted for a future single release, is musically solid but questionable in terms of Harvey’s thought-processes lays the conceit of the album bare as Harvey sings “I took a plane to a foreign land / and said ‘I’ll write down what I find’”. She also opens the track with the gambit “restlessness took hold my brain / and questions I could not hold back” but then proceeds not to ask any, merely settling for more description and leaving any judgments for the listener. It’s a valid enough approach, but it sends mixed signals.

Quite what she’s trying to say with TH6DP isn’t always clear despite the journalistic tone, and its ambiguity therefore means whatever message is there doesn’t quite hit home in the same way that Let England Shake did, where you were left in no doubts as to what was being communicated. Harvey’s intentions were never in any doubt on that record, as she spent years carefully poring over poetry, documentaries, academia and the personal testimony of soldiers in order to immerse herself as fully as possible in the horror of war. Here, it feels a little distant, disconnected, as if you’re looking through the lens of a camera rather than Harvey’s own eyes. Tracks like ‘The Community Of Hope’, the intentions of which have already landed her in trouble with local politicians in the area of Washington she was writing about, rely on rhetoric rather than description. But Let England Shake was unusually declaratory by Harvey’s own standards, so TH6DP actually represents business as usual in this respect.

The aforementioned track, with the lyric “now this is just drugtown, just zombies / but that’s just life here” causing much of the trouble, is a quotation that Harvey ascribes to a reporter from The Washington Post who was giving her a guided tour of a deprived ward in the city that was in the process of being re-developed (or gentrified, or socially cleansed, depending on your outlook on these things). The ambiguous kiss-off line “they’re gonna put a Wal-Mart here” clarifies her standpoint, in the same kind of way that Courtney Barnett’s observational ‘Depreston’ did last year about house-hunting in the suburbs. But that Harvey has quoted somebody else is kind of the problem: we don’t get her take on things, and it leaves a spectral, stern and anthemic track with a little something missing that would have made it perfect. We get descriptions, not commentary. But this often works to her advantage on tracks like ‘Medicinals’, where she draws a picture of a woman a wheelchair, or the unflinching description of trauma on ‘Chain Of Keys’ (“imagine what her eyes have seen / we ask but she won’t let us in”).

But, these occasional problems with POV and privilege aside, one is still left with a stark and interesting album that can’t quite get across what it wants, but fails to do so entertainingly. While it doesn’t quite have the thematic singularity in its message, or the same heart-stopping urgency as its predecessor, The Hope Six Demolition Project does offer a bracing, intelligent discourse on the shape of the modern world, and as such is a worthy successor to Let England Shake. (8/10)

Listen to The Hope Six Demolition Project here, and tell us what you think below!