WOMEN IN ROCK no.5: Exene Cervenka 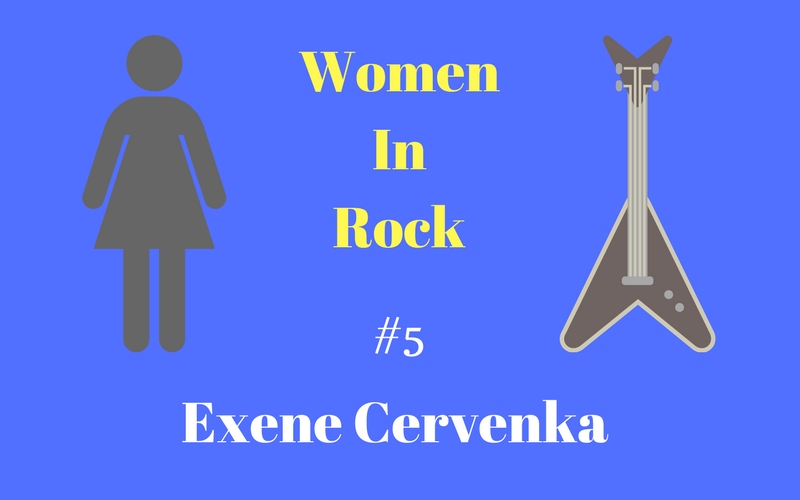 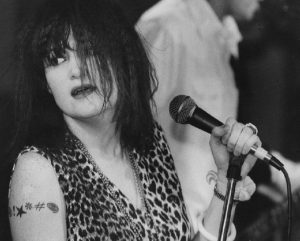 Exene Cervenka performing with X in 1986 (photo by Sam Cali)

For this month’s Women in Rock profile, I was challenged to explore an artist that I was less familiar with, and I came up with the incomparable multi-media artist Exene Cervenka. Born Christine Lee Cervenka, Exene is an icon of the L.A. punk scene, best known as the singer from the first-wave American punk act X, a band that have been on my radar for a few years but, until now, I had never fully implored myself to actually learn more about the band members themselves.

In addition to her work with X, Exene has released six solo records, the most recent being The Excitement Of Maybe in 2011. Exene has also explored work in areas other than music, enjoying success as a visual artist with her work being exhibited in various galleries across the States, and has authored various books and publications including Virtual Unreality, which was published through Henry Rollins’ company 2.13.61.

Exene Cervenka has also performed with various other bands such as The Knitters, The Original Sinners, and (possibly my favourite band name ever) Auntie Christ. X reformed in the 1990s and continue to tour to this day with the original line up. They have recently launched a Kickstarter campaign to release a live album of shows performed in Latin America in 2011 and are due to start their 40th anniversary tour.

L.A. punk is commonly associated with hardcore bands, a genre into which X never really fit (Cervenka herself has previously mentioned that the hardcore kids hated X) and yet, paradoxically, played an important part in the late ‘70s and early ‘80s in opening up the scene to hardcore bands that were yet to come, such as Black Flag and Circle Jerks.

Hardcore punk has traditionally been a very male-dominated sub-genre of punk, which probably plays a part in why Exene Cervenka is held in such high regard. Exene added some femininity to the scene (something which was also happening with The Germs around the same time) but in quite a remarkable way, it seems that Exene has never become a part of the ‘poster girl’ category in the same way that females associated with the New York punk scene, for example Debbie Harry, unfortunately often seem to be remembered as, despite their musical credentials.

For the most part, it appears that Exene seems to have always been respected as an artist, first and foremost. Cervenka fell quite naturally into a songwriting role within the band, as she had previously written poetry which, as the story goes, is how X came to form in 1977. Fellow X member and ex-husband John Doe had supposedly set one of her poems to music, saying that he could perform it with his band but offering to give her credit for it. Cervenka refused this and joined the band herself. Cervenka’s poetry has undoubtedly played a part in the way that X sound. It adds a more interesting dynamic to their lyrics and the way that they are delivered, something of more value.

Another aspect that set X apart from the rest of the L.A. scene was the obvious country and rockabilly influences. While there’s no argument that X are a punk band, their rock ‘n’ roll guitar riffs and licks brought something new to the table. In certain songs, most notably 1980 debut Los Angeles and 1981’s career-defining Wild Gift, they may offer hints of ‘three chord punk’, that comes with the territory, but the talent and ingenuity of Cervenka and X cannot be questioned due to the way that they took those country and rockabilly styles and fused them so seamlessly with punk.  That country-influenced style was even explored further in X side project The Knitters, made up of X’s Exene, John Doe and DJ Bonebrake along with guitarist Dave Alvin of The Blasters, it’s almost hard to believe that it’s the same band.

When we consider all of the bands that exploded onto the various punk scenes around the world in the 1970s only to fade away after a handful of releases, it is bands such as X that went that bit extra and gave us something else, added another dimension to the simple dictats of first-wave punk, that we are still talking about today.

X have no doubt influenced many bands in their time, but Exene Cervenka is an artist that also takes time to help and work with the bands and artists that her music has helped. Rancid’s bassist Matt Freeman has spoken of what a huge fan he is, and when Exene formed Auntie Christ in the 1990s, Freeman joined the band along with X drummer DJ Bonebrake.

Most recently, Exene has worked with Oklahoma alternative rock band Skating Polly. Cervenka met Peyton and Kelli at a show in 2010 and “was immediately impressed by their extensive knowledge of punk rock”. Since this first encounter, Cervenka has worked with the band numerous times. She produced their 2013 album Lost Wonderfuls, her son Henry is making a documentary about them, and they are accompanying X on their current 40th anniversary tour.

Exene Cervenka is a remarkable woman with an equally remarkable career, one that spans over four decades and various creative media. For anyone that wishes to find out more about Exene, there is a playlist below featuring songs from various stages of her career. However, if the music is not enough, there are also various talks and interviews with her that can be found on YouTube, and I also highly recommend that you check out The Decline Of Western Civilisation (1981) documentary about the L.A. punk scene.

Check out our Introduction To… playlist to Exene Cervenka here via Spotify – happy listening!