WOMEN IN ROCK no.4: Debbie Harry 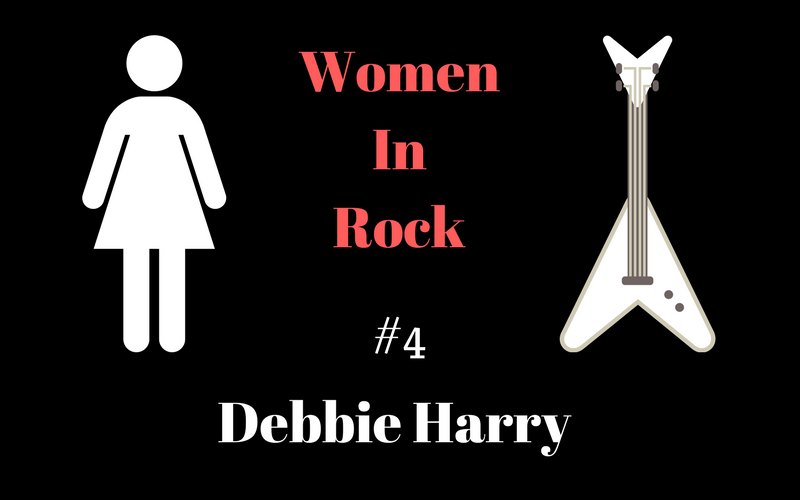 This month’s Women In Rock profile will focus on the iconic Debbie Harry, most famously known as the frontwoman of Blondie. Harry is widely recognised for her iconic vocals, and of course her unmistakable peroxide blonde hair, but that is just one of the reasons why she is often more remembered as a sex symbol than an artist. This profile will look back over her 40-year career and remind us how it is that she has earned her position as one of the most recognised artists in music.

First things first – Blondie is the name of a band. Debbie Harry and Blondie emerged out of the CBGB’s scene of 1970s New York, alongside bands and artists such as Patti Smith, New York Dolls, and Talking Heads. Although they were initially considered a punk band, due to the associations CBGB’s had with the New York punk scene, they have often been ousted from this category, sometimes even by some of their fellow CBGB’s crowd. Johnny Ramone once publicly declared how Blondie ‘lacked musical integrity’ when asked what he thought about their experimentation with a more ‘disco’ sound (a la ‘Heart Of Glass’). Blondie were soon dubbed ‘New Wave’ (essentially ‘radio friendly punk’) and have made themselves known for the way that they have always experimented with various musical styles.

No two Blondie albums sound the same, but all of them manage to maintain an authentic Blondie sound that is instantly recognisable. Any cursory listen to 1978’s Parallel Lines, a classic album of its era that puts paid to any suggestion that Blondie were somehow merely ‘just a singles band’, will tell anyone this. It is expected that bands and musicians are music fans themselves, but it can be argued that no band has been as upfront about this as Blondie have. As previously mentioned, they have shown their admiration for various genres in their attempts to incorporate them in their own music. Examples of this can be heard in their cover of John Holt’s ‘The Tide Is High’ which has a more rocksteady/reggae sound to it; ‘Heart Of Glass’ which features a heavy disco influence; and ‘Rapture’, where the band show their appreciation for rap and hip-hop music. ‘Rapture’ was also the first rap video to be shown on MTV and was the first song with a rap in it to reach no.1.

As well as experimentation in sound, Blondie’s love for music can also be considered in their rather impressive back catalogue of covers, and also their many collaborations with other artists. Their most recent album Pollinator, released just a couple of months ago, only features two songs that have been written by Debbie and Chris themselves (although other band members have also contributed) and the rest is made up of covers and tracks that have been written by other artists for this album. They are as skilled in interpreting other people’s music as they ever were.

But female artists weren’t exactly unheard of in the ‘70s, especially if we’re looking at the New York and London punk scenes, but what is it that makes Debbie Harry stand out? Firstly, the hair. She brought the Hollywood blonde bombshell into New York’s Lower East Side. Mick Rock notes that ‘the reflective power of the dyed blonde is more potent than the natural’, Debbie turns heads and commands attention. Harry claims that it was due to her admiration of these Hollywood blondes that made her hit the bottle, she claims “that glowing irresistible attraction gave me little choice, I had to be a blonde. As well as this mad attractiveness that the blondes possessed for me, they also seemed so innocent: the vulnerability of little children, the child inside us all”.

This can tell us a lot about Debbie, that there is more to her than meets the eye. Of course, she is obviously beautiful, but just like the dark black hair that lies underneath her blonde (which she claims is because she couldn’t see that part in the mirror), there are hidden depths to her which are not immediately assumed. Debbie became the object of many young men’s fantasies (and probably some older ones) during the peak of her career, which most likely plays a part in how she is remembered.

But the issue with Harry being remembered for her looks, is that recognition for her talents seems to fall by the wayside. She is always praised for her voice, however her abilities as a songwriter often seem to go somewhat unrecognised. Her solo career often feels like it is barely even heard of; after the demise of Blondie in the 1980s, Debbie went for it alone and recorded albums such as Rockbird, Debravation and KooKoo, and Debbie has also enjoyed success as an actor, starring in movies such as David Cronenberg’s Videodrome and John Waters’ Hairspray. It becomes genuinely irritating that when we consider how much she has done over the course of her career, that ‘being pretty’ is largely what she is remembered for, especially when we consider her associations with the punk movement, a movement evoking strong notions of inclusion and empowerment, that sought to break away from the segregated, patriarchal confines of previous decades.

It is fairly difficult to write a profile on Debbie Harry. She is now aged 72 and still performing with Blondie today, currently on a North American tour with Garbage. Despite the fact that she is a globally recognised artist, she has remained a somewhat elusive character, and has never given too much away. Other than the exception of ‘Making Tracks: The Rise of Blondie’ and forewords in various other books, she has kept herself relatively private, offering us just snapshots of her life in these forewords and interviews and, of course, hundreds of Chris Stein’s photographs. But hopefully this profile adds a bit more insight into the enigmatic world of Debbie Harry, and drive home the point that there is more to her than her face.

Check out our Spotify playlist, ‘Debbie Harry: An Introduction’, by clicking here!