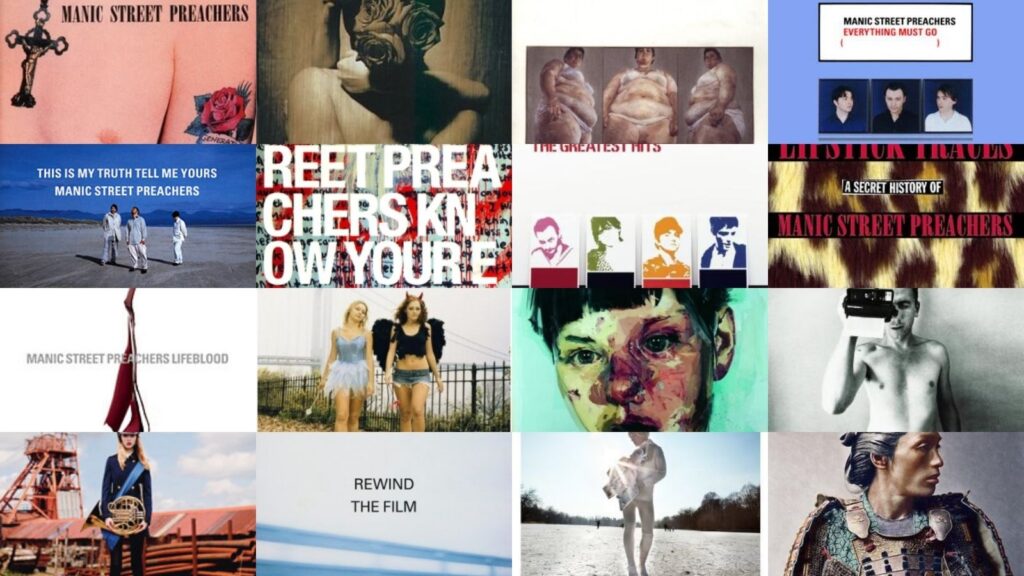 After the last shot at the big time that was Postcards… and the triumphant victory lap of the National Treasures singles compilation in 2011, some had thought that the Manic Street Preachers would finally call it a day. But the subsequent world tour apparently revitalised them, and shortly afterwards the band announced the release of two contrasting albums in quick succession. The first, Rewind The Film, was released in June 2013 and saw the band take a very different musical path: lush, pastoral folk was the theme, and for once MSP sounded truly settled and at peace with themselves, if not the world. Although it shares a musical kindred spirit with 1998’s This Is My Truth Tell Me Yours, calmness and serenity, rather than brooding anxiety, was the overriding mood. The seven-minute title track, a duet with Richard Hawley about escapism and nostalgia based on a David Axelrod sample, was the ideological centrepiece, but the brass-tinged salvation of ‘Show Me The Wonder’ and the wounded optimism of ‘Anthem For A Lost Cause’ also stuck out.

Another notable aspect was a newly discovered willingness to collaborate: along with the title track, MSP invited Lucy Rose to sing on gorgeous opener ‘This Sullen Welsh Heart’ and Cate Le Bon on ‘4 Lonely Roads’. The change of direction really suited the band, and Rewind The Film remains a joy to listen to even though it’s their most uncharacteristic moment by far. James Dean Bradfield’s vocal delivery, in particular, is a joy to behold, as he sprinkles ‘Running Out Of Fantasy’, ‘This Sullen Welsh Heart’ and ‘Builder Of Routines’ with a curious stardust. The album performed better than expected to on the charts, entering at Number 4 after a three year recording absence, and it proved that public appetite for the Manic Street Preachers may sometimes waver but will usually return. (8/10) (LISTEN)

The second part of a double album billing post-National Treasures, it’s hard to believe that Futurology was made in the same studios at the same time as the gorgeous folk of Rewind The Film. The Manics’ twelfth LP was an ambitious melding of ’80s synth / stadium rock and ’70s post-punk: it holds Simple Minds in the same regard as Public Image Ltd. It also had a distinct ‘time and place’ feel to it: if Generation Terrorists was their American album and Rewind The Film their Welsh album, Futurology was MSP’s European album. The beautiful krautrock instrumental ‘Dreaming A City (Hugheskova)’ is about Welsh miners settling in what is now the Ukrainian town of Donetsk, and it’s a shorthand for Futurology as a whole: intelligent and evocative.

It is by turns anthemic (drive-time synth-rock ‘Walk Me To The Bridge’, ‘Futurology’, ‘Misguided Missile’) and avant-garde (the Goldfrapp-esque Nina Hoss duet ‘Europa Geht Durch Mich’; the dreamscape ‘Between The Clock And The Bed’; the classical music snatches of ‘Let’s Go To War’). Only the demure ‘Divine Youth’ gives any indication that the album was cut from the same cloth as Rewind The Film. With the sole exception of ‘Sex, Power, Love And Money’, Futurology’s execution matches the ambition, and even on this one stumble, the result is nevertheless charming in spite of its flaws. The list of musical inspirations is as broad as the number of themes Wire deals with: working class consciousness (‘The View From Stow Hill’), Russian futurists (‘Black Square’), the redemptive power of travel and transportation (‘Walk Me To The Bridge’), the aforementioned ‘Dreaming A City’, as well as self-deprecation and dealing with the Manics’ own history (‘The Next Jet To Leave Moscow’ refers to the gig in front of Fidel Castro in 2001).

Recent years have seen many veterans rediscovering the glories of their pasts (Bowie, Cave, My Bloody Valentine, Suede) and the Manic Street Preachers have been no different. Futurology, released 22 years after the Manics’ debut Generation Terrorists, was as vital, energetic and fiercely intelligent as anything they did in the intervening time, and suggested that they were far from a spent force. More importantly, it represented the first time that the Manics released albums of genuine, consistent quality back-to-back since the pre- / post- Edwards disappearance records The Holy Bible and Everything Must Go eighteen years before. (8/10) (LISTEN)

Collectively a year away from their fifties, Manic Street Preachers’ 13th album seemed to be borne from an internal stimulus to redefine what it was they expected from themselves. As such, Resistance Is Futile can be seen as an attempt by the band to reconcile two contradictory versions of themselves – the one looking optimistically towards the future, of rousing anthems and fearless rhetoric, which brought us Everything Must Go and Send Away The Tigers, and the more pensive and melancholic Manics, the regret-filled and self-doubting band that recorded This Is My Truth Tell Me Yours and Rewind The Film. It wrestled to resolve their populist tendencies with their artful ones, to address the turmoil of the outside world and their place within it. Barring a handful of ideas that failed to spark to life, it did so pretty successfully.

Nicky Wire’s description of “widescreen melancholia”, in general, sums up the qualities of Resistance Is Futile. The autumnal joy of lead single ‘International Blue’, recalling the FM melancholia of ‘Motorcycle Emptiness’, was a bit of an outlier for the album as a whole. The reflective ‘Distant Colours’ was a sullen beauty, as was the glorious panorama bemoaning the disintegration of social bonds of ‘Hold Me Like A Heaven’. On the more experimental side, the chamber-pop duet with Catherine Anne Davies (a.k.a. The Anchoress) on ‘Dylan & Caitlin’ was a delight, as was the machine-like throb of ‘Sequels Of Forgotten Wars’.

Despite the prosaic delivery that hampers the emotion of ‘Liverpool Revisited’ and the by-numbers ‘Broken Algorithms’ and ‘In Eternity’, there’s something in Resistance Is Futile for any Manics fan, and that ends up being a galvanizing trait rather than a compromising one. The single most revelatory and comforting thing about the album was that, on the brink of their fourth decade together, Manic Street Preachers were still committed to invention and self-discovery, long after their contemporaries of the Nineties had disintegrated or lapsed into comfortable repetition. Long may it continue. (7/10) (LISTEN)