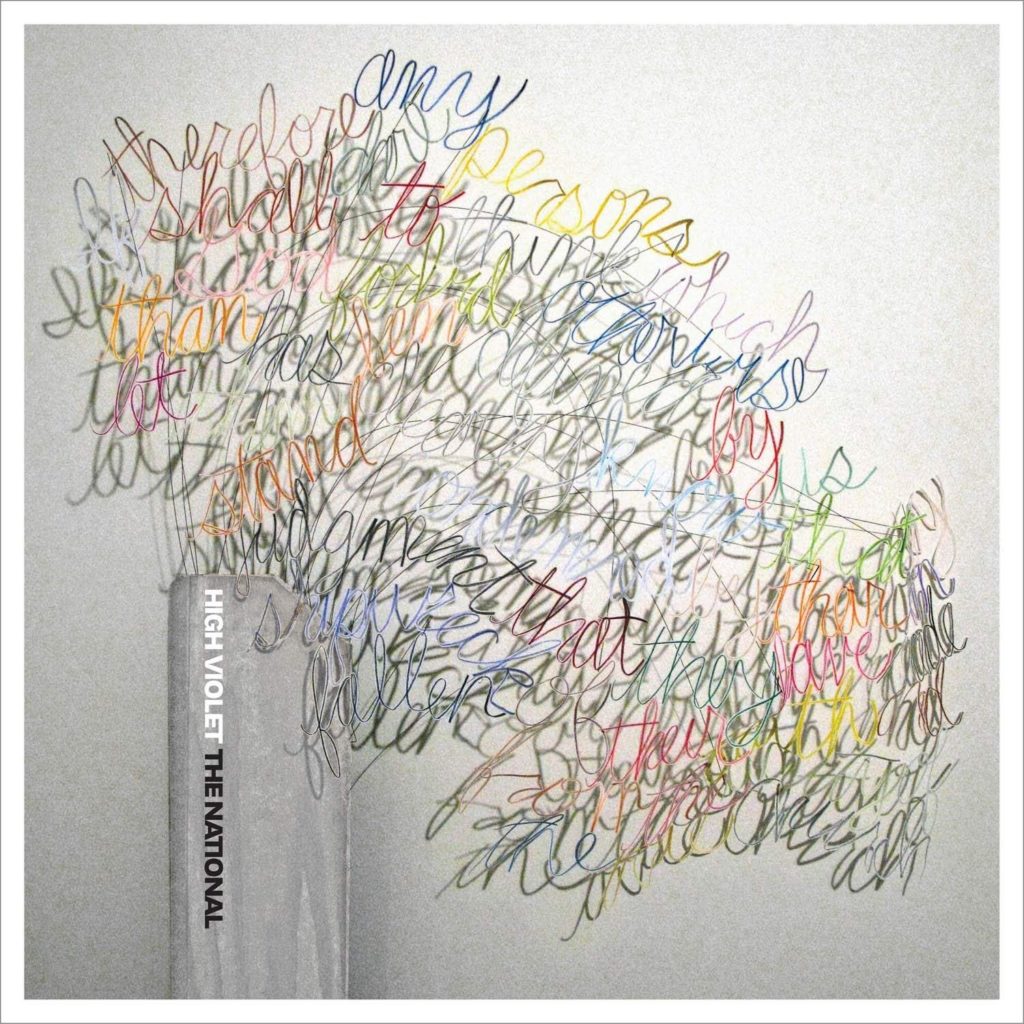 The National have always attracted the somewhat backhanded compliment of a “grower” band. It’s a label freighted with the slightly lazy assumption that after over-repeated listens, and perhaps a few break-ups, you’ll eventually get it. Looking at it from the perspective of a music journalist and the “canonical” re-telling of indie and alternative rock, it can definitely appear so. Nearly two decades into their career at this point, The National have yet to write a bona-fide hit single, a radio staple for the ages. They’ve never received anything remotely resembling overnight success, or a right-place-right-time kind of jump to fame and glory. Instead, they gradually built their audience over a number of albums and relentless graft on the international live circuit.

Retrospectively looking back on their career like this, the impact of High Violet, now a decade old, is obvious. If their previous release, 2007’s Boxer, was the band turning the heads of music enthusiasts and indie aficionados, then High Violet was the band finally getting attuned to some form of commercial success, becoming festival headliners, with performances on Jimmy Fallon and the like.

However, I would additionally argue that High Violet, in particular, is undisputable proof that The National have as much potential for immediacy in them as anyone would require. That it brandishes an apparent and immediate beauty, rather than one that you can only appreciate once it’s seared into your brain against your will by an overly-enthusiastic friend.

It’s sound of the band coming together as a whole. Still just as broody as before, yet coloured in at the edges. With subtle arrangement cues that opened up the songs in a way that’s almost meta-reflective of the band opening up to greener pastures. It’s The National coming completely into their own as songwriters, their sound now encompassing not only guitars and the now distinctive, marching band-like drumming style (trademarked by Bryan Devendorf), but also orchestral instrumentation, bigger arrangements. Aiming for a sense of grandeur in a similar way to bands like Elbow.

Even in its most traditionally tame and dark moments – like the slow-builder ‘Runaway’ – High Violet tends to always be edging, seemingly just waiting for some sort of in-built grandiosity to burst through the seams. A lot of this can be attributed to the guitar playing of the Dessner twins Aaron and Bryce, who apparently were encouraged by Berninger to employ less of their traditional arpeggiated finger picking style of playing, and to veer more towards an almost Ed O’Brien-like ambient style of thinking in textures as much as traditional harmony.

These changes are apparent from the very beginning, with opener ‘Terrible Love’ incorporating a distorted yet hushed guitar that builds in texture rather than note count. When it builds and builds until the guitar and the drums seemingly split apart to make way for the repeated line “it takes an ocean not to break”, it’s all the more heart-wrenching, as if the band is somehow genuinely reaching through the speakers to pull whatever pent-up trauma you have by way of arrangement. Later on the record, ‘England’ seems to subtly suggest arena potential. String and woodwind and brass sections slowly build into something that feels as much made for an emotional performance at Albert Hall as it is for an inspiring football ad.

The lyrical subject tends to, in the band’s usual manner, touch upon various bouts and onsets of depression, anxiety, grief, and other things you find on the side-effects labels of certain medications. However, more than just a marathon in stifling dreariness, the central theme of High Violet, if one can be chosen, seems to be dealing with a life’s worth of change and, god forbid, finding yourself. Over the course of the record there’s talk of home or a similar feeling, in all its different iterations. Finding yourself back home, wishing you’d feel at home, wishing to run away from home, it’s like the ‘(identity) crisis’ part of the typical three-act structure forwards, backwards, and around a couple of times.

Matt Berninger, as is now expected of him, drops his distinctly melancholy, direct, and idiosyncratic lines. Highlights include: “With my kid on my shoulders I try / Not to hurt anybody I like / But I don’t have the drugs to sort it out” on the anxious ‘Afraid Of Everyone’, the creepy and somewhat funny “I was afraid / I’d eat your brains” on ‘Conversation 16’, “Someone send a runner / Through the weather that I’m under / For the feeling that I lost today” on the aforementioned ‘England’, and many more. Not to even mention the classic “Sorrow found me when I was young / Sorrow waited, sorrow won”, from the aptly titled ‘Sorrow’, which the band performed for six hours straight at for an art exhibition in NYC’s Museum of Modern Art (whose complete performance was released in physical form as a massive vinyl collector’s edition even more aptly A Lot Of Sorrow).

The thing is, despite their indie status and the now more than tired cliché of “selling out” or whatever a certain portion of the audience thinks happens when musicians also get hungry, The National never wanted to be anything less than a fully-formed, headliner act. Sing-alongs, and lighters in the stadium, and radio play, and a world-tour and all the rest. In a recent retrospective piece on this very album for the NME, Matt Berninger stated: “We wanted to be a big band. We wanted to reach everybody.”

And that anthem-writing push to be heard is up front and centre here, especially on what a lot of fans still consider to be the band’s best song – ‘Bloodbuzz Ohio’. It’s High Violet’s centre-piece fixture. The drumming starts up fast-paced intense and somehow only gets more intense throughout the runtime of the track, like a marathon runner at the point of mania. Berninger pens the most obscure and vague yet almost the most immediately relatable lyrics of his career. “I still owe money, to the money, to the money I owe / The floors have fallen out from everybody I know”. Somehow the perfect encapsulation of the anxieties of 21st century adulthood. Nothing about hearing this live is anything less than anthemic.

Most importantly, even 10 years after its initial release date, High Violet retains the feature that only truly great albums seem to display over time: awe, even over repeated listens. One of those records that gets you interested in or even noticing a completely new thing every time you hear it. Grabbing you with a different lyric. Climaxing at a different moment. High Violet is one of those records that gets lusher and more intricate with every listen, yet somehow, always remains just sparse enough to let you fill in the blanks yourself.

Listen to High Violet by The National here via Spotify, and tell us what you think below!