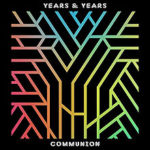 I should know better than thinking “hotly anticipated debut” is for anything other than PR and lazy showbiz journalism, yet I still clung to the hope that the much buzzed-about Years & Years would deliver a sound to define 2015. Communion is crammed with the kind of slickly produced house-pop London does so well, yet even singer Olly Alexander’s boyband-perfect voice fails to carve any palpable emotion into the flat electronic beats, minimalist synth work and repetitive melodies. It’s hard to imagine anyone who hasn’t heard at least a snatch of ‘King’ in the months since it was released in January. From TV idents to dancefloor remixes and a near-constant rotation on Radio 1 (after a BBC Sound of 2015 victory), the plausible and undeniably catchy pop track has had its life squeezed away.

‘Ties’ – I had to check my Spotify account to see whether an ad had started – is a cross between the background music you’d hear playing on TOWIE and the generic cheese pop they slap all over teen fashion adverts, the song is teeth-grindingly bland. The attempt at an atmospheric, echoey chorus comes off like a lack-lustre Maroon 5 cover. With Sam Smith vocals and Diplo-inspired dancehall rhythms, ‘Real’ is shimmering but shallow, ‘Take Shelter’ is a top 40-yeawner, and ‘Shine’ is perfectly nice but absolutely unoriginal.

Years & Years began as a five-piece with guitars before the launching off into an electronic direction. As a result, the theatrically-trained Alexander’s songwriting occasionally touches on the emotionally astute: “I need you at the darkest time / you hold me and I have to shut my eyes…” he sings. However, the lovelorn lyrics are more often than not diluted, misdirected or lost amid an anthemic chorus tailored to soundtracking Thai boat parties. It’s sunny music – for Wetherspoon pub gardens, cruising ‘with the lads’ and V Festival. So, naturally, it was always going to be huge. (3/10)