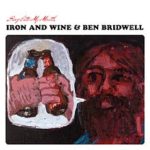 Front cover of ‘Sing Into My Mouth’

Though they can occasionally offer an interesting insight into an artist’s influences, covers albums have a distinctly chequered reputation – no matter how varied the source material, it takes a truly exceptional artist to avoid the potential pitfalls of the exercise. While most can muster up one or two original interpretations, the attempt to do so a dozen times usually produces a flattening effect over the course of a full-length album. Even an artist as essential as David Bowie made Pin Ups in 1973, which was the only blip in an otherwise golden decade for him. Therefore, they almost always wind up as footnotes to a discography, rather than irreplaceable parts of an artist’s narrative. Sing Into My Mouth, a collaborative effort between South Carolinian pair Sam Beam (a.k.a. Iron & Wine) and Band Of Horses’ frontman Ben Bridwell, at least offers the possibility of genuine novelty as it’s the first time they’ve worked together. Both have been responsible for some of the most distinctive alt-folk and country rock of the last 15 years, all the time maintaining a friendship based on mailing each other their favourite music.

Taking turns on lead vocals, Beam and Bridwell spend most of Sing Into My Mouth within their respective comfort zones when tackling a dozen songs ranging from Talking Heads to Sade and Bonnie Raitt to Spiritualized. Opening with the Heads’ 1983 single ‘This Must Be The Place (Naïve Melody)’, they humanise the detached original by stripping out the bendy, quirky synths and leave it as a resplendent paean to love played on acoustic guitars. Beam’s honey-covered tones suit it well, breathing warmth into Byrne’s introverted lyrics. Quickly, though, we run out of genuinely novel takes and get into the meat of an album that sounds extremely pleasant but not a lot else. Bridwell takes a slightly rougher approach with his vocals, turning out decent covers of Ronnie Lane’s ‘Done This One Before’ and Unicorn’s ‘No Way Out Of Here’, a song which already existed more famously in the public arena as a cover by Dave Gilmour. The moaning pedal steel guitars make the tracks work as well as they do, wrapping proceedings in a kind of musical comfort blanket.

Occasionally, Beam and Bridwell bring something new to the table, turning John Cale’s ‘You Know More Than I Know’ into a lovely, sun-dappled autumn landscape. However, it mostly sticks to faithful but ultimately neutral renderings: Spiritualized’s ‘Straight And Narrow’ and the rather inert take on Sade’s ‘Bulletproof Soul’ being two cases in point. Despite being perfectly charming in its rustic interpretations of tracks that span half a century, there’s little genuine insight into either artists’ souls. At its least essential, it’s the sound of two old friends getting liquored up and having a great time singing some of their favourite songs – which is at least more than you can say for the majority of covers albums. (6/10)

Listen to Sing Into My Mouth here!