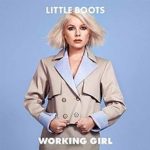 Breaking onto the scene in 2009 with her debut record Hands, Little Boots’ unique style on tracks including ‘Meddle’ and ‘Stuck On Repeat’ drew praise from industry critics, particular for her use of the Tenori-on and the Stylophone. Whilst her 2013 follow-up record Nocturnes was overshadowed by her electronic pop contemporaries including Lady Gaga, Little Boots (aka Blackpool’s Victoria Hesketh) is now CEO of her own record label (On Repeat Records) and is, as her new album suggests, a working girl. Having being dropped by Atlantic in 2013, Working Girl is intended to be a defiant celebration of womanhood and independence and gives a nod to classic dancefloor fillers.

The record’s concept is loosely based on the late ‘80s movie flick of the same name and stylistically is somewhere between Girls Aloud’s ‘Biology’ and Chvrches’ ‘Tether’. Electronic pop always has a hard job competing; especially artists on an independent label who are competing against the big boys. Unlike its predecessors Working Girl plays to the rules of electronic pop and due to this a couple of tracks including ‘No Pressure’ and ‘Get Things Done’ are slightly forgettable. Things pick up on ‘Taste It’ and ‘The Game’ which are a throwback to early ‘90s Madonna with a twist of La Roux thrown in for good measure. Both are reminiscent of Little Boots’ early records which have a distinct quirkiness in sound and rhythm.

Lyrically the record is very heavily influenced by gender equality and feminism. That concept alone may be slightly off-putting to the casual listener, but it’s sung rather than preached. The closing duo of ‘Paradise’ and ‘Better In The Morning’ are comfortable ‘90s influenced bass-heavy electropop numbers, but across the board the tracks are second-rate and make almost no effort in pushing any musical boundaries or identifying a USP. As any business owner knows, sometimes risks and experimentation have to be taken as being comfortable doesn’t get you anywhere. Sadly this record proves the point, although there are a couple of peaks if you are familiar with Little Boots. (5/10)