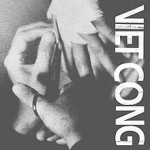 Following the demise of Canadian group Women after the death of guitarist Chris Reimer, two of its ex-members Matt Flegel and Mike Wallace hired local musicians Scott Munro and Daniel Christiansen and decided to soldier on in the form of Viet Cong. The new group dabbles in a more cinematic variant of the dark, grimy post-punk that Women played, and their self-titled debut follows twelve months after their debut EP Cassette. Recorded in a barn in rural Canada, the sound is authentically rough-hewn and cavernous, its low-end bass sounds at times hinting at the influence of the great Steve Albini.

Like Thee Oh Sees, Viet Cong’s approach is to mould tried and tested influences into something that doesn’t necessarily sound new, but timeless. Viet Cong could have been made at any point since Slint’s epochal Spiderland, to which it bears a passing structural resemblance. Third track ‘March Of Progress’ offers the first real insight into what the group has to offer, a three part journey through shoegaze, post-punk and goth characterised by sharp, unexpected transitions, ending up in a flamethrower of psych-pop. 11-and-a-half minute closer ‘Death’ is even more elaborate but no less resonant, which starts with a surprisingly light riff, like Joy Division playing major chords, but imperceptibly becomes a heavy death march before shifting again into a light, frenetic ending.

Other tracks are much shorter and more straightforward, but Viet Cong see it as a chance to concentrate their efforts. The open-ended drone of ‘Pointless Experience’ and the monk-like death chant of ‘Newspaper Spoons’ begin the album, and are both less than four minutes long, the latter a mix of muffled, quietly apocalyptic drumming and squealing feedback. The simplistic joy of the demented ‘Bunker Buster’, with its pummelling drums, is how Editors would sound if they were any good. ‘Continental Shelf’ is an odd choice for a single, a murky guitar soundscape over a reductive 2/2 beat. But this is part of the joy of Viet Cong. So many influences are pushed into a compressed space, jostling for position at various points in the tracks, and the result is an imperfect but consistently interesting debut. (8/10)