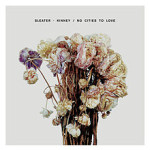 Front cover of ‘No Cities To Love’

Of all of the well-documented reunions in music over the last five years, few make as much sense as Portland’s Sleater-Kinney. Formed in 1994 and as contemporaries of Bikini Kill and the riot-grrl movement, there was always something more cerebral, more lasting about them. Their de facto leader Carrie Brownstein, who has since found fame in the TV world having co-written ‘Portlandia’, said in 2008 that she’d only consider reforming Sleater-Kinney when she “felt like there was more of a story to tell… with each other”. Drummer Janet Weiss played with The Shins and Stephen Malkmus before hooking up with Brownstein once more with her post-S-K group Wild Flag, while Corin Tucker threw herself into motherhood before forming the Corin Tucker Band. But nearly a full decade after their last album The Woods (2005), they’re back to pick up the torch that pretty much nobody else has bothered to pick up since they dropped it.

As soon as ‘Price Tag’, a think-piece about post-recession money worries, clatters and thrusts its way out of the speakers, No Cities To Love strikes the listener as having all the energy of a second debut, and the pace holds up for the rest of the album’s 32 minutes. Brownstein, Tucker and Weiss’s musical chemistry and interaction is entirely undiminished through the passing of a decade. The title track has a spacious feel to it, whose (dare we say) poppy chorus goes “it’s not the cities it’s the weather we love / it’s not the weather it’s the people we love”. Sleater-Kinney show variety too: on the quieter ‘No Anthems’, Weiss’ pummelling drum pattern is the key engine as the guitars take a back seat. The sensitive ‘Bury Our Friends’ is a rumination on mortality, something the eternally youthful vigour of Sleater-Kinney has never had to contemplate before.

But in the main, No Cities To Love is defined by sweeping drives of post-punk – ‘A New Wave’, ‘Surface Envy’, ‘Fade’ and ‘Fangless’ stick to the compelling chemistry we’ve come to know and love. Hooking up with John Goodmanson, producer of three of their original seven albums, has given them a cleaner, brighter sound quality, unlike The Woods which sounded quite boxed in. We’ve badly missed the likes Sleater-Kinney. Few groups have the energy and ethos to really capture the hearts of those who yearn for something different to what the mainstream offers up as ‘indie’, now a grossly co-opted and compromised term in 2015. The mere fact of their reunion was enough to gladden the heart – that they’ve pulled off such a robust record after such a long hiatus only adds to the sense of satisfaction. (8/10)