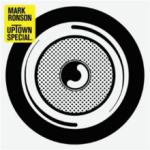 Currently sitting atop the UK Singles chart for a fifth non-consecutive week, Mark Ronson’s ‘Uptown Funk’ is absolutely everywhere. It’s a ubiquity to which he’s accustomed: 2007’s Version was the coffee table album of the year, yielding six singles and shifting close to a million copies. But by the same token, Ronson is also accustomed to his divisive status. For every person who loved Version’s playful approach to cover versions, there was at least one who was horrified at the cheesy easy-listening manner in which he reconstructed classics by Radiohead, The Smiths and The Charlatans. Hand on heart, I must admit that I was in the latter category. Opinion is similarly split on ‘Uptown Funk’, but its parent album Uptown Special inverts the formula, just like 2010’s Record Collection, by getting the bigger name stars to cover the originals.

With a coherent concept at its heart, secured by roping in author Michael Chabon to write the lyrics on all but two of the eleven tracks, Uptown Special just about holds together. It plays like a tribute to the music Ronson loved as a child, the funk, disco, soft rock and soul of the ‘70s, done with a DJ’s sense of arrangement and music-making. But fans of the lead single, with its updated Studio 54 and P-funk, might be surprised at how laid-back most of the rest of the album sounds. With the exception of the brash funk of ‘I Can’t Lose’, all of the Chabon-written songs are notably slow-paced, focussed primarily on atmosphere rather than rhythm. Tame Impala’s Kevin Parker shows up three times to sprinkle his gentle Lennon-esque vocals over proceedings, including the rather lovely new single ‘Daffodils’, a soft-rock/soul hybrid built on a squiggly bass line.

Elsewhere, Mystikal shows up to lend his barking rap to ‘Feel Right’, a harder-edged dance number that recalls James Brown. But towards the end of the album, Ronson struggles to keep the listener’s attention, with the likes of the Andrew Wyatt-starring ‘Heavy And Rolling’, sliding out of memory as soon as they’ve finished, and two badly timed interludes entitled ‘Crack In The Pearl’. As much as Ronson’s detractors might want to hate Uptown Special, it’s very well observed and really rather enjoyable in places, and at worst innocuous and disposable. Certainly it’s a record to be broken down and cherry-picked for songs to put on individual playlists, but this is partly because of Ronson’s background as a DJ and an acknowledgment of the decline of the album as a format in pop. (6/10)