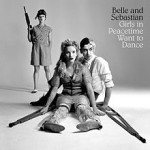 Front cover of ‘Girls In Peacetime Want To Dance’

Almost two decades after forming the group as a school project they all assumed that they would disband after two years, Glasgow’s Belle & Sebastian are still going. Nineteen years of wistful, literate, shy but melodically bold indie-pop have shown them to be a band of paradoxical qualities. Allmusic sums them up perfectly: “private but not insular, pretty but not wimpy”. A reissue campaign of their back catalogue is due to get under way in 2015, so this would seem to be a fortuitous time for Stuart Murdoch’s men to make their return. Girls In Peacetime Want To Dance is their eighth studio album – or ninth, if you count 2002’s soundtrack to the Todd Solondz movie Storytelling – and first since 2010’s rather forgettable Belle & Sebastian Write About Love. They’ve ditched that album’s producer Tony Hoffer and hired Ben H. Allen III (Animal Collective, Kaiser Chiefs, Bombay Bicycle Club), who seems to have allowed them to rediscover their old joie de vivre.

Right from opener ‘Nobody’s Empire’, Girls In Peacetime… delivers the kind of spritely chamber-pop rushes that we’ve become used to, and it’s immensely satisfactory. ‘Allie’ sees them portray characters with flaws, but sympathetically so: “You make a list of your heroes / and think of what they went through”, a teen who naively thinks that suffering like their idols will make them better and not more damaged. Sarah Martin takes vocal duties for the clean, synth-powered ‘The Power Of Three’, and again for the preppy ‘The Book Of You’. The string-swept ‘Ever Had A Little Faith?’ could have been written by Nick Drake. ‘The Cat Who Got The Cream’ is a similar moment of quieter moment of reflection, Murdoch’s shy, lilting croon perfectly complimenting the dampened strings and acoustic guitars.

But there’s a surprising number of atypical B&S moments here. Lead single ‘The Party Line’ dabbles in… funk? And cowbells? Is this the same band? The joyously campy disco track ‘Enter Sylvia Plath’ is a mid-album delight, just when you would think that no track mentioning the notoriously morose author could be possibly be upbeat, that features Murdoch and Martin trading vocals. ‘The Everlasting Muse’ has an undefinably continental feel to it, a perfect soundtrack for café culture. On the downside, some of these tracks, particularly the dance-orientated ones, tend to outstay their welcome. ‘Play For Today’, though its odd mixture of twee and house is perfectly satisfying, lasts for nearly eight minutes for no discernible reason. But these small complaints are outweighed by the amount of (relative) experimentation on offer, certainly in terms of form and structure, that B&S have often been quite slow to engender in the past. Plus, from a purely fan-boy point of view, it’s really great to have them back! (7/10)