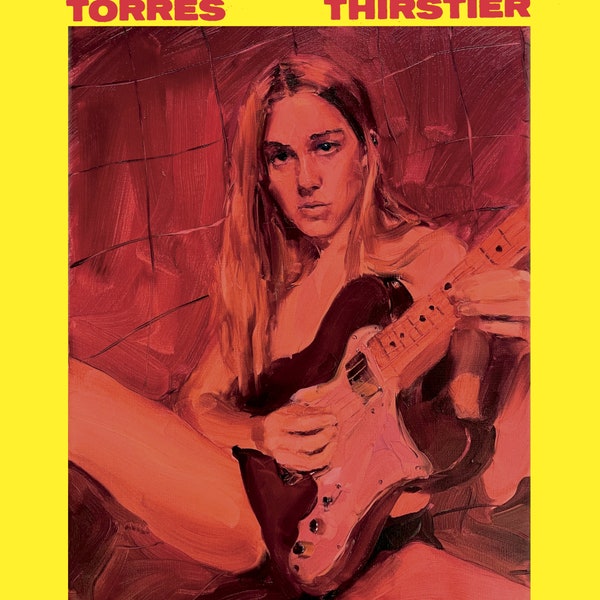 ‘Thirstier’ is a dazzlingly executed power move into the mainstream for Mackenzie Scott’s TORRES project.

When she was dropped by 4AD around three years ago, it seemed as if Mackenzie Scott was sputtering out of momentum in her career. The songwriter later said that the label’s surprise decision, just one album into a three-record deal, was “the hardest time of my life” and that she considered quitting music at one point. Happily, she soon landed on her feet with a new record deal with the equally prestigious indie label Merge, who released her next TORRES album Silver Tongue early in 2020. Barely a year and a half later, Scott bests even that classy album with Thirstier, a monster power move that exudes ambition and confidence and also completes a classic redemption narrative arc.

Thirstier is the kind of breakout album that’s a throwback to a time when artists were allowed to mature and develop in public view, not expected to strike creative or commercial gold instantly. Feeling like a perfection of the steady process of maturation in her art since her precocious 2013 self-titled debut, it begins with the satisfyingly crunchy guitar burst of ‘Are You Sleepwalking?’, with its addictive, juddering rhythms and Scott’s guttural, Breeders-esque vocal tics. What follows is a more or less faultless display of prowess that’s sonically diverse in terms of its influences, but makes sense as a coherent whole by way of the force of Mackenzie Scott’s formidable character, in the same way that all those PJ Harvey albums all felt distinctively hers despite being so different.

‘Don’t Go Puttin Wishes In My Head’ is a stately power-pop gem; ‘Constant Tomorrowland’ is an infectious, string-embellished anthem; and ‘Drive Me’ is buoyed by a huge, shimmering FM-radio guitar backdrop. As a sequence, this opening quartet completely captivates the listener’s attention, and Thirstier doesn’t let up for its duration. It’s unusual enough to hear an album from the independent sphere being this direct and straightforward, and even rarer for an artist doing so be successful and also retain the sense of character that established their fanbase in the first place.

There’s a real sense of the album being a broad church for many different types of song. The subdued ‘Big Leap’ sits next to the deliriously upbeat ‘Hug From A Dinosaur’ with its squealing synths and almost cheesily deployed handclaps. The bombastic and stagey title track, the bubbling electro-pop of ‘Kiss The Corners’ and the atonal, snarling closer ‘Keep The Devil Out’ are all in a sharply focussed second half that maintains the album’s momentum. The only place where Thirstier slightly drops out of top gear is the comparatively anonymous ‘Hand In The Air’. But it’s such a minor complaint when held up against such an embarrassment of riches, one that represents nothing more or less than the coming-of-age of TORRES. (9/10) (LISTEN)

Listen to Thirstier by TORRES here via Spotify, and tell us what you think below!