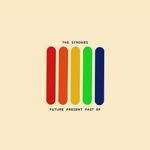 The Strokes have had a tougher time than most in keeping everybody satisfied in the 15 years since their scene-starting masterpiece Is This It. The numerous critics and fans who’ve laid into them for failing to make an album as good as their debut have often been the same ones who’ve ridiculed them for trying to move on, so it’s hard to blame them for being a bit prickly when it comes to how they present themselves to the world. They had not recorded a note together in three years since 2013’s Comedown Machine, an album they didn’t bother to tour or promote and was recorded essentially to release themselves from a record contract, and the various solo projects each member has engaged in over the last decade suggests that they might individually regard The Strokes as a convenient brand rather than a living, breathing project.

However, three weeks ago, they suddenly announced a new three-and-a-bit-song EP – their first such release since January 2001’s The Modern Age EP that originally put anticipation and hype levels through the roof. Given its title, Future Present Past, can listeners expect a kind of new-generation ‘reboot’ of this iconic band, one that sees them adopt elements of 2016 and plugs them into the raw new-wave revival template of 2001? Not really.

Dealing first off with the ‘Future’ part of the EP’s title, we get an extremely intriguing insight into a possible new direction with ‘Drag Queen’, a Bowie-esque glam-rock pastiche cross-bred with decayed bass and guitar sounds, brightened by a picked guitar solo from Nick Valensi. Julian Casablancas’ lead vocals are as stylised and affected as ever, and the listener has to do a lot of work to figure out what he’s singing. We then get the ‘Present’ bit, which pretty much picks up where The Strokes’ left off three years ago with a new-wave/’80s guitar pop blend in ‘Oblivius’, whose knitted, latticed guitar noodling could have come from Comedown Machine or 2011’s Angles. There’s also a more spacious remix of the same song from drummer Fabrizio Moretti on the EP, who is able to tease some more nuance from the track. Lastly, we get the ‘Past’ – the bored, arrogant sneer that all five members seem to conjure up on ‘Threat Of Joy’ takes the listener right back to their earliest material, with a simple, light and insistent riff providing an enjoyable throwback that defies the obvious conclusion that the song itself isn’t that great.

Future Present Past could end up being looked upon as The Strokes clearing its throat before making a full album, taking stock of their history before looking forward, but given that Casablancas has already dampened hopes by saying another album will only be made “if the collective will can be summoned”, this EP may simply have to do as a final, frustrating reminder of the game-changing effect they once had, and why they never truly followed up on it. (6/10)

Listen to Future Present Past here via Spotify, and tell us what you think below!