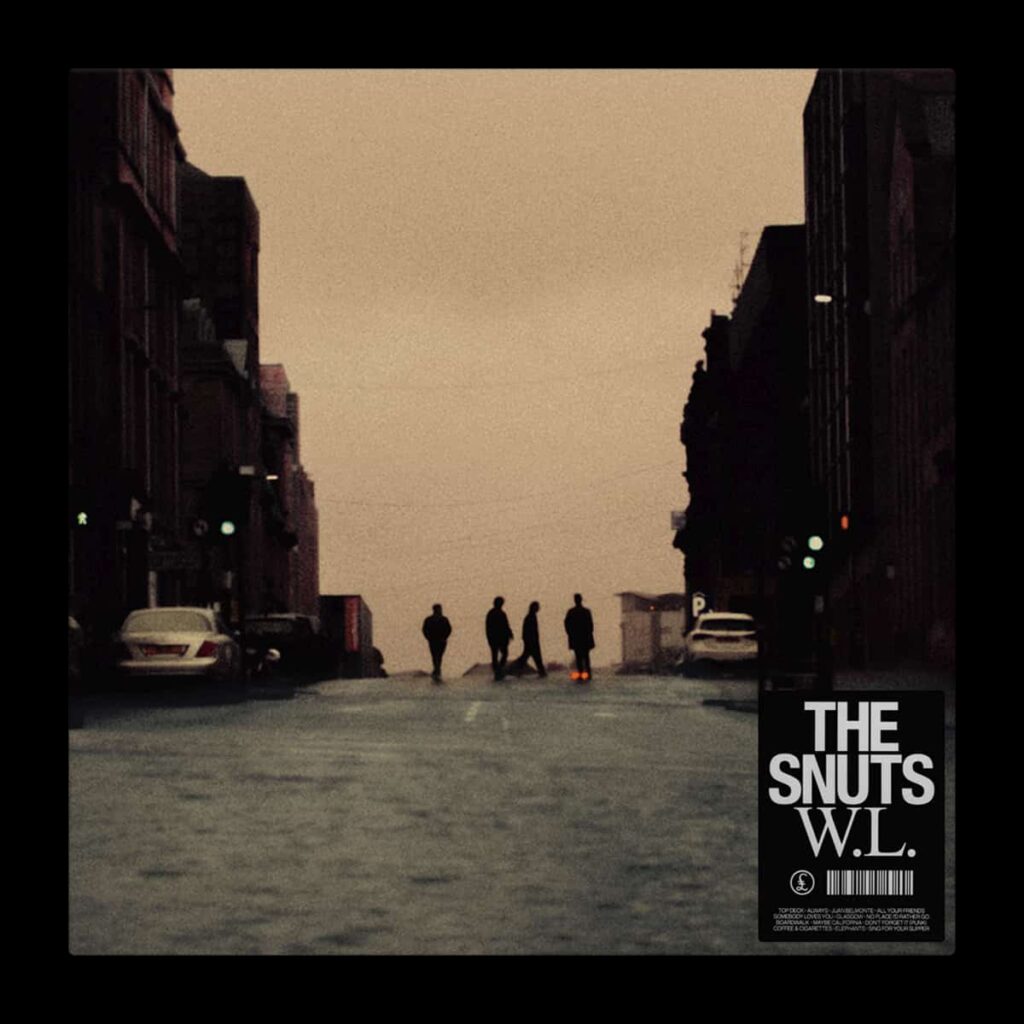 Processing other bands’ better ideas without originality, The Snuts’ debut album ‘W.L.’ is as landfill as indie can get.

Bands rarely offer such bold and unabashed statements before a debut album as that of The Snuts’ lead singer Jack Cochrane. The Glaswegian frontman really gave it the big build-up during the LP’s announcement, describing it as “our lifetime work… a collection of milestones and melodies that timestamp a dream we had becoming a reality”. This sort of statement sounds more like the leader of a political party hyping up a new manifesto than a singer of plucky indie band celebrating their first album release. The truth is that this sort of promotion would be a bit grand for most debuts, but in the case of W.L. it’s laughably over the top and only heightens the disappointment of listening to the end result.

W.L. sees The Snuts, a band hotly tipped by the unimaginative souls who populate major label A&R departments mainly for their energetic live performances, attempt to traverse a wide variety of different styles and genres with unvaryingly poor results. The prime example of the album’s fatal flaw comes in the three-track stretch of ‘Juan Belmonte’, ‘All Your Friends’ and ‘Somebody Loves You’ – each of which are stylistically unique, but similarly underwhelming. ‘Juan Belmonte’ is their bluesy effort and sounds like a bad pastiche of Brothers-era Black Keys with all the edge drained out of it. Next we turn to noughties indie on ‘All Your Friends’ where the guitars and vocals sound like some throwaway warm-up from Arctic Monkeys’ Favourite Worst Nightmare sessions. The fact that this pair of tracks have nothing in common stylistically is no bad thing in isolation, but what leaves a bitter taste is that they sound so blatantly ripped-off of specific albums by other artists.

‘Somebody Loves You’ represents an even more stark departure in terms of style and completes this dreadful trio of sonic missteps. The song itself is a real low point in an album that to this point hasn’t reached any sort of highs, as the band choose to model themselves on Imagine Dragons at their most placid and docile. The attempts at edginess in the raspy vocals of the preceding tracks are thrown out the window for the type of innocuous tune that wouldn’t sound out of place as background music on CBeebies.

The level to which this set of songs clones other, better bands is made both obvious and jarring by their grouping together, which leaves the first half of the album sounding like a cynical merry-go-round of genre hopping with thought to coherence or uniformity at all. The Snuts sound like the are happy to play the jack of all trades on their debut until they land on the style that will catapult them into the mainstream. It sounds like the result of a process in which the band have thrown half-baked ideas at a wall until enough of them congeal into something presentable. It leaves the identity of the band utterly blurred and so shamelessly malleable, while producing nothing of originality or substance.

Unfortunately, things don’t recover from here, and W.L.’s second half contains a string of entirely forgettable tracks with a few alarmingly bad standouts. Among these is two-minute whirlwind that is ‘Don’t Forget It (Punk)’. Watch out, this banger comes with its own warning label in the form of the wince-inducing (Punk) in the title, which cautions listeners that there’s gonna be some rip-roaring rock and roll coming right at you. In case you forget this is meant to be a punk song after the painfully generic riffs kick in, then there is the ad-lib “punk” shouted every other line and lyrics like “I don’t regret it when we’re bringing the funk” to remind you of just how rebellious The Snuts are. The cringe-worthy adolescence that characterises so much of the lyricism on the album is really bizarre for a band whose members are well into their mid-twenties – what punk music are they listening to?

Outside of this there are the lower key tracks such as ‘No Place I’d Rather Go’ and ‘Boardwalk’ that fail to engineer the type of nostalgia their respective moods suggest. It really should be over by this point but the final pairing of ‘Elephants’ and ‘Sing For Your Supper’ manage to cram more mediocrity into this debut. The former contains a messily assembled, Maroon 5-esque instrumental bed that is somehow overshadowed by lead singer Cochrane’s rapping in the chorus. Yes, that’s right, actual rapping – need I say more? After this, closer ‘Sing For Your Supper’ needlessly clocks in at six minutes in length, with its overblown Kings Of Leon worship and faux-emotional build up to an end that sounds just as cynically contrived as the rest of the album.

If we’re looking to offer a modicum of fairness, W.L. as an album mainly consisting of singles released over the band’s first few years of existence, so perhaps the incoherence of musical styles can simply be put down to early experimentation. However, the total absence of originality cannot be excused, and there simply isn’t a song that goes against the grain of this consistently poor record. (2/10) (Joss Lambert)

Listen to W.L. by The Snuts here via Spotify, and tell us what you think below!