REVIEW: The Mountain Goats – ‘Getting Into Knives’ (Merge) 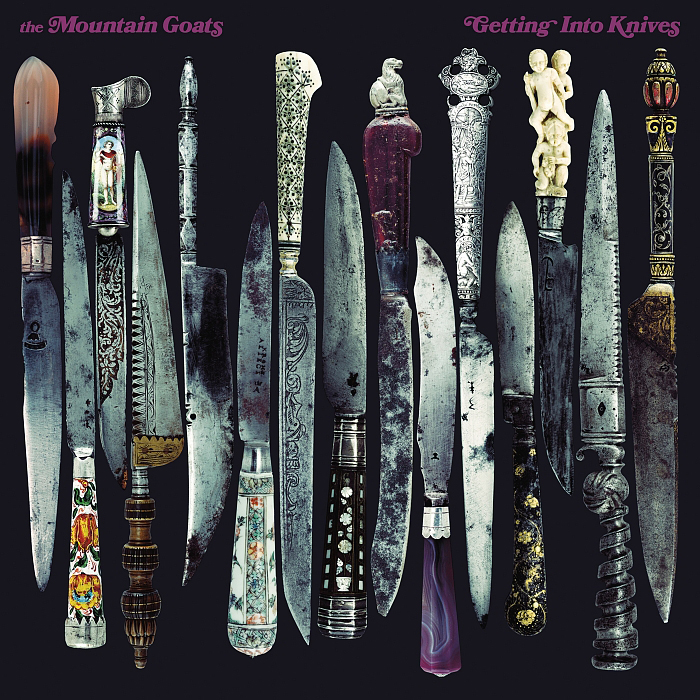 On ‘Getting Into Knives’, the 19th Mountain Goats album, John Darnielle keeps his songwriting arsenal sharpened.

The coronavirus outbreak has obviously wreaked complete havoc upon many aspects of the music scene, but one thing that it was plainly never going to do was stop John Darnielle from releasing more music. Recorded in Sam Philips Recording studio in Memphis – the same intimate room where his heroes The Cramps made their debut Songs The Lord Taught Us in 1980 – over just six days right before the lockdown was enforced in March, Getting Into Knives represents The Mountain Goats’ 19th studio album, and their second of 2020 alone after the boombox-recorded Songs For Pierre Chuvin that featured Darnielle alone.

Fortunately, the huge output of quantity over 18 months that includes last year’s fine In League With Dragons has not come at the expanse of quality. Darnielle, whose recent uptake of long distance running is an entirely appropriate metaphor for his industrious approach to creativity over his near-thirty year career, is in especially inspired form on much of Getting Into Knives, embracing an array of different styles on this 13-track collection. Unlike many artists of his vintage, there’s no sign of Darnielle getting predictable in terms of how he presents his work, always open to expanding his arsenal of songwriting weapons notwithstanding that immediately recognisable signature style of his.

Kicking off with the old-fashioned rockabilly rhythms of ‘Corsican Mastiff Stride’, there’s a clear nod to the surroundings, but if you’re worried at this point that proceedings are going to descend into retro cosplay, then you’re forgetting John Darnielle’s intelligence. It’s merely an overture to a sequence of songs in which The Mountain Goats up their game, even compared to the high quality of latter-day triumphs like Beat The Champ.

A trio of slower-paced tracks that appear mid-album don’t interrupt the momentum, but are some of the album’s most compelling moments, such as the realistic depiction of grief of ‘The Last Place I Saw You Alive’ (“it’s only now and then you come to mind”). The mellifluous duo of ‘Tidal Wave’ and ‘Pez Dorado’ are executed masterfully and effortlessly, while the upbeat soul inflections of the snarky ‘Get Famous’ and the earthy indie-rock of lead single ‘As Many Candles As Possible’ vary the tone and tempo of the album brilliantly.

As ever, it’s the character/scenario that provide the most striking moments. Recent single ‘Picture Of My Dress’ sees Darnielle turn a tweet he saw about a woman coping with divorce by taking a roadtrip in her wedding dress into a deeply touching and profoundly human portrait of personal crisis. The little details, like being in a Burger King and hearing Aerosmith’s ‘I Don’t Wanna Miss A Thing’ on the tannoy, make it as charming as it is, and it’s a slice of Mountain Goats par excellence. The closing ‘Getting Into Knives’, a gently winding and understated tale of revenge and passion, is another real gem in their discography.

The Mountain Goats in 2020 are as close as it’s possible to get to a sure thing in terms of the quality the listener has come to expect. Getting Into Knives is as good as anything that John Darnielle has made in the last dozen or so years, and an accurate representation of the full-band iteration that’s made them so dependable (as opposed to the All Hail West Texas-era, solo boombox auteur that he used to be). There’s so many instances of his artistry that it’s very easy to take The Mountain Goats, and the high standards that Getting Into Knives easily meets, for granted year upon year. Let’s not miss a chance to truly appreciate one of America’s songwriting treasures. (8/10) (Ed Biggs)

Listen to Getting Into Knives by The Mountain Goats here via Spotify, and tell us what you think below!