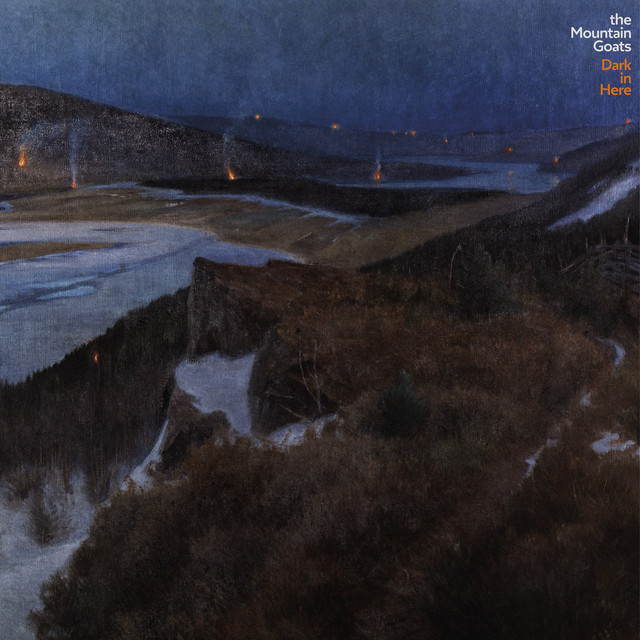 John Darnielle and The Mountain Goats excel once again on 20th album ‘Dark In Here’, telegraphing pre-pandemic dread and anxiety.

While the pandemic itself is tentatively looking like the end might be in sight, the concept of ‘pandemic art’ is one that will almost certainly be around for a long time to come yet. Bands who were about to embark upon recording projects in the spring of 2020, or were interrupted halfway through by the lockdown, are now getting around to releasing those delayed projects, and it’ll be impossible to view them in any other context than that of enforced isolation, of the world outside shutting down and growth of terrifying uncertainty for our fellow man. This certainly applies to John Darnielle and The Mountain Goats, whose twentieth studio album Dark In Here captures and poetically communicates that sense of dread.

Recorded in the space of just six days immediately after the fevered sessions that produced last year’s Getting Into Knives at Alabama’s legendary Muscle Shoals studio in mid-March 2020, the overwhelming mood of Dark In Here is one of solemn reflection, but delivered with Darnielle’s inimitable wryness which gives everything such a distinctly human touch. While it’s slow – all but two of these dozen tracks are delivered at a pace slightly below mid-tempo and with feathery percussion and light-touch guitar and piano beds – the atmosphere is consistently absorbing, with Darnielle’s extremely strong storytelling qualities spotlighted.

Opening with the brief ‘Parisian Enclave’, with its lyrics presciently conjuring up images like “rats returning home to our nests”, the best tracks feel like storm clouds gathering overhead. The dread of title track ‘Dark In Here’ sees Darnielle tangentially reference ideas of hysteria and accountability (“when the smoke clears we’ll know who kept their word”). On ‘Lizard Suit’, he seems to prophesy the repetitive nature of how we’d come to spend our locked-down weeks, singing “let my phobias control my habits / let my habits form the shapes of my days”, and with ‘The New Hydra Collection’, the poetic turn of phrase “silent as a snowdrift” beautifully evokes that sense of nature healing that defined that spring.

In these moments, Darnielle seems to channel the spirit of the late Dylan masterpieces, something reinforced by some beautiful arrangements. Bassist Peter Hughes and percussionist Jon Wurster have been Darnielle’s creative foils for several years at this point, and their contributions are as understated and vital as ever. The likes of ‘Mobile’ and the exquisite, National-esque ‘Before I Got There’ are gorgeous illustrations of their intuitive skill. It’s only ‘The Destruction Of The Kola Superdeep Borehole Tower’ and ‘The New Hydra Collection’ that break up the mood, both nominally upbeat because of their tempos but which still dwell in the same thematic space.

Given the nature of this album’s recording, it might therefore be some time before we hear from The Mountain Goats again, but knowing John Darnielle, he’s holed up during this benighted time and recorded another couple of great albums. In the meantime, Dark In Here will have to tide us over, and fortunately it’s another strong, consistent and unique display of songwriting. (8/10) (Ed Biggs)

Listen to Dark In Here by The Mountain Goats here via Spotify, and tell us what you think below!