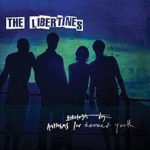 As a 14 year old in 2004 I was hooked on The Libertines, so I must declare a certain bias, but also sense of dread at the prospect of Anthems For Doomed Youth. Fans knew that a third album looked like not only the most unlikely thing in the world, but also possibly one of the least desirable. However, 11 years long years after their flawed masterpiece The Libertines, they’re back as a serious recording force. This is a band who were a phenomenon like few others, and changed the face of the British music industry in the early ‘00s. With their own mythology, the leading duo of Pete Doherty and Carl Barat led a very public, fractious relationship full of drugs and jealousy which then spilled on to the front pages of every newspaper.

The Libertines were the start of the social media phenomenon for interaction and consumption of music. At its most primal stage, the increase of internet forums helped to generate a very loyal fan base – so loyal that they would be willing to receive tattoos from the band themselves. Ramshackle gigs in their London flat organised via the web were commonplace, and so it was obvious from the start that The Libertines would become one of the most significant bands of their generation. It’s been their absence, however, that has elevated them to one of the greatest.

As a fan of the band I speak personally in advocating the importance of The Libertines and this third release. I personally missed the boat with their 2002 debut record Up The Bracket which I eventually landed upon after listening to their 2004 self-titled follow-up. The mythology, the visual elements and the lyrics were an enormous draw. They hit a peak in 2004, with their most well-known track ‘Can’t Stand Me Now’ hitting #2 in the UK singles chart. But, of course, it couldn’t last – ‘Can’t Stand Me Now’ quickly looked in retrospect like the group falling apart in public, trading those lines back and forth on the same microphone while face-to-face, staring each other down. Doherty was soon kicked out, with Anthony Rossamondo filling in as the sad rump of the group limped round the festival circuit that summer before fading away in relative ignominy by Christmas.

Over the course of the next decade, Doherty had solo records and hits with the even more volatile and inconsistent Babyshambles, Barat led the sturdy but unglamorous Dirty Pretty Things, and even bassist John Hassall released a record Yeti. In all that time, most of the group have settled down with wives and kids, but Doherty has struggled with being on right side of the law. But it all changed in 2010 yet the band announced that they were set to return for a reunion tour, though both Barat and Doherty both openly admitted they were touring for the money and a new album seemed very unlikely. However, five more years passed and Pete has undergone treatment for his drug habit and Carl has had a moderately well-received solo album as early as this year with his backing band The Jackals.

Pete’s recovery sets the scene for Anthems For Doomed Youth. During a stint in Thailand, where he was based in an addiction centre, the rest of the band flew out in support and recorded material in Bang Saray’s Karma Sound Studios. Having previously recorded with The Clash’s Mick Jones the band took a slightly unexpected approach in selecting Jake Gosling as producer, whose credits include commercial unit-shifters like One Direction and Ed Sheeran. This pointed towards a direction away from ramshackle rock and towards a greater focus on ballad led compositions, and something more stable and solid than the band we knew of old. But many were concerned that they’d trade in some of their spirit in return, and perhaps lose some of that chemistry that was oh-so crucial to their first two records.

The band stated that they didn’t want to replicate previous records, and instead move ahead with the times and accept the challenge of appealing to a brand new generation of music fans. No longer could they document the warts ‘n’ all relationship of Barat and Doherty, but this record covers the reconciliation of the band and an overview of the mental scars. But though relationships are better, there is certainly a lot of emotional venting.

First up ‘Barbarians’ and ‘Gunga Din’ are noticeable as some of The Libertines darkest material to date. The latter track is influenced by watered-down reggae and doesn’t quite hit the highs of ‘The Delaney’ or ‘I Get Along’, though the production is clear, polished and festival-ready. ‘Fame And Fortune’ is a nod to the band’s admiration of cockney duo Chas & Dave. Its Russian circus-style riffs link nicely into London name-checks.

The album’s strengths come in dribs and drabs but the title track has a sense of familiarity for Libertines fans of old. Much like ‘Music When The Lights Go Out’ its semi-acoustic composition gives the track a distinct sense of hope and nostalgia. Much is the same with ‘You’re My Waterloo’ which has long been a fan favourite. The piano led ballad shows Doherty at his best. Doherty’s vocals are perfectly complimented by a swaying string section. The famous call-and-response vocals of Doherty and Barat feature on ‘Heart Of The Matter’ with Barat repeating the line to Doherty: “You’ll get by, you’ll get by with your wicked little smile”.

New single ‘Glasgow Coma Scale Blues’ is somewhere between ‘Can’t Stand Me Now’ and ‘What Became Of The Likely Lads’. By far the vocal highlight of the record, its riotous delivery is amplified by interludes of clever production. Fittingly, album closer ‘Dead Love’ is a vaudeville ballad dedicated to Alan Wass – a friend and collaborator of Doherty who recently passed away. The sound of film projectors whirring, pianos and a faintly trip-hop rhythm give this track a sense of final, comradely resolution between Doherty and Barat, putting all those rancorous troubles of 2004 to bed.

It was perhaps always certain that this album was never going to live up to the dizzy heights of their first two records, but its endearing quality in that it isn’t attempting to replicate old material. Whilst there may be a few misses on Anthems For Doomed Youth the majority is positive, with greater levels of maturity and which, crucially, leaves their legacy intact. Against all odds, The Libertines have turned in an inspired third record, which may show a new generation why so many loved them the first time around. (7/10)