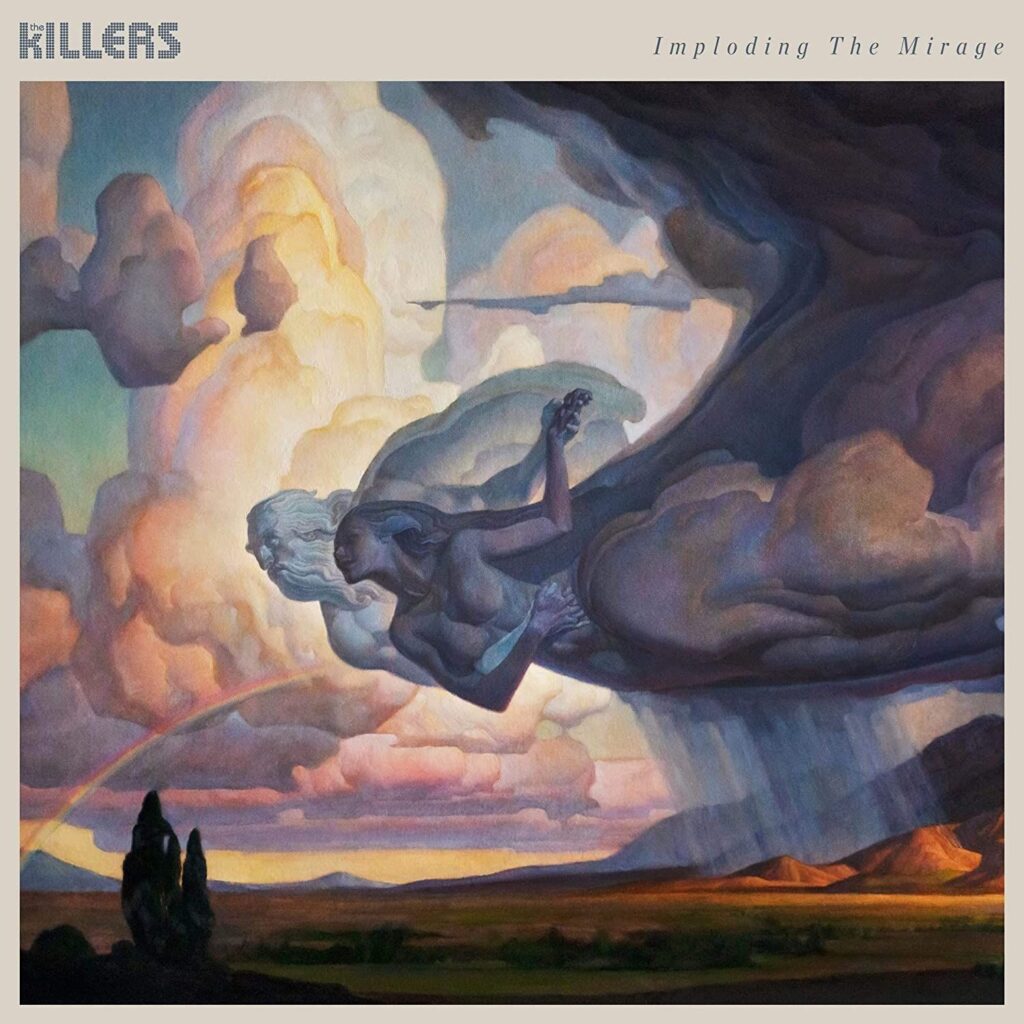 The Killers’ sixth album ‘Imploding The Mirage’ has solid and touching moments amid the usual Springstonian bombast.

The Killers deliver another album to blast us all back into the mid-2000s, when everyone was unashamed to listen to all-male rock music and everything was more or less well in the world… at least by comparison to the current hellscape that constitutes Planet Earth at this point in time. Imploding The Mirage arrives as album number six for Brandon Flowers and friends. Since their inception, the Vegas outfit has never really switched the direction of their sound that drastically, more carefully edged from their specific breed of ridiculously compressed alternative rock to ridiculously compressed Springsteen worship rock. And Imploding The Mirage might be the Springsteen worship-iest of them yet.

The Killers’ brand is stadium anthems, through and through. You’d struggle to find a song in their discography that doesn’t ooze some sort of bombast or desire for grandeur. Yet they on occasion struggled to wring out any genuine emotional response amidst all the guitar solos and chanting choruses. 2017’s comeback Wonderful Wonderful was met by a mostly average, even underwhelming, critical reception. Imploding The Mirage makes some steps in the right direction to try and dial back the bravado when necessary and let the storytelling do its job, but yet again it is often marred by annoying production choices and lyrics that too often opt for vague, all-encompassing statements rather than a more preferable personal touch.

Opener ‘My Own Soul’s Warning’ has one of those combinations of synth riffs and acoustic guitars that plead for some serious country head-bopping. Straight out of the same class as ‘Danny, Dakota & The Wishing Well’ by A Silent Film. It does a good job of making your ears prepared for the other 35 minutes of the record, and while the lyrics fall decidedly on the side of inspirational Etsy prints, the hook is undeniably catchy. Meanwhile, ‘Dying Breed’ tries its absolute hardest to build up to some emotional crescendo while being full of mixing choices that make it nearly unlistenable. Flower’s hushed delivery is way too loud during the verses, and when the snares properly come in with the synths, and the guitars, and the vocal overdubs during the chorus it all sounds so snappy and bright that it felt like each snare hit is trying to drill through my eardrums on purpose.

There is something incredibly American about The Killers. Obviously, the outfit hails from Las Vegas – an embodiment of distinctly American values if there ever was one. But even more so, there’s something in their incessant worship of the American spirit of freedom. The need to break away. To be “free”, in that vague and non-specific sense of a coming-of-age story.

This teenage / midlife-crisis spunkiness is embodied in lyrics like “’Cause it’s some kinda sin / To live your whole life / On a might’ve been” and narratives about seemingly infinite “white trash” girls with dancer mothers and fake bling who are just looking for their one chance to live their life untamed and unshackled. The Killers here seem to always be walking a line between anthemic, inspiring, and banal.

‘Fire In Bone’ tries to go for some bizarre mash-up of disco grooves and glistening ‘80s synths. Flowers sings from the perspective of a protagonist who felt everything else aside from fine, until of course the finale of the outro, where the heroic chanting “Here I am” comes in, as if Bryan Adams was haunting some deep dark crevice of your brain. It is always just a bit strange to hear Flowers attempt to embody these distinctly masculine cowboy idealisms. His personal image kind of always has fed into more of an “The other man” character. In that very Brendon Urie kind of way: somewhat-maybe-maybe-not gay, somewhat androgynous, mostly actually straight, never offensive. The Appropriately Feminine male vocalist. Seeing him in a flannel and a cowboy hat in the music video for ‘My Own Soul’s Warning’ feels like a surrealist meme.

That said, Flowers’ emotional delivery does bounce back on occasion and he delivers some genuinely believable lines, when he manages to hit that sweet spot between in-touch-with-your-emotions and not a drag race lip-sync of a Springsteen or a U2 song. ‘Caution’ is a definite highlight of the record and is just pleading to be put on by your dad during a BBQ for a good sing-along. ‘My God’, featuring Natalie Mering of Weyes Blood, also makes an at least partially successful attempt at a non-ironically uplifting chorus. Mering’s harmonies on the chorus compliments the main vocals in a way that’s quite unexpected.

Imploding The Mirage is almost sweet in its complete lack of disillusionment, and even if it ends up being a bit more eye-roll inducing than not in places, it’s not completely deprived of some solid musical moments. All in all, even if the days of immediate mega-hits like ‘Mr Brightside’ and ‘Somebody Told Me’ are seemingly behind the band now, there are other moments where the hook is worth suspending your cynicism in favour of indulging in something silly and pure, just on occasion. (5/10) (Ellie Wolf)

Listen to Imploding The Mirage by The Killers here via Spotify, and tell us what you think below!