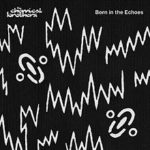 Front cover of ‘Born In The Echoes’

It’s taken a five year absence to remind us not to take The Chemical Brothers for granted. With only the soundtrack to the independent film hit Hanna and a live album and theatrical release Don’t Think to tide us over, the commercial dance scene has become totally overrun by the empty calories of EDM, so a reassertion of the nutritional goodness provided by that scene’s spiritual forebears is long overdue. An absolutely storming Glastonbury set last month, in which they closed out the Other Stage on the Sunday night, was a timely reminder of the Chems’ tremendous potency in the live arena, showcasing their new material prominently in a set that took a playful approach to the rest of their back catalogue.

Born In The Echoes, their eighth studio album, continues where 2010’s Further left off, taking the extended dancefloor workouts that saw them get back to first principles and mixing that with the tendency for star collaborations and festival bangers that became their calling card. With only a couple of exceptions, it pays off staggeringly well, with a distinctly darker edge that takes the listener down the same rabbit hole as their peerless 1997 classic Dig Your Own Hole. Interviewed last month, Tom Rowlands seemed to distance himself from the Chemical Brothers’ immense legacy, saying of the new material “we’re just really into making funny sounds and putting them into some kind of order that makes sense… …not every song has to be the meaning of life.” This is an almost churlish attempt to downplay the quality of Born In The Echoes, which rediscovers the duo’s historical mission to fuse house music with indie, funk, hip-hop and psychedelia.

After only one listen, what’s immediately striking is how much of a disorientating experience this album is. Right from the blaring, all-out assault on the senses of opener ‘Sometimes I Feel So Deserted’, Rowlands and Ed Simons create their builds and drops out of materials that owe more to dark ’70s psych-rock. The icy swirl of ‘Under Neon Lights’ is a case in point, with current indie queen St. Vincent providing some truly chilling vocals (“and she moves to suicide / in and under neon lights” she intones with dead-eyed majesty) and deploying some of the tricks they learned on their soundtrack work. ‘EML Ritual’ sees them pitch-shift, layer and intertwine Ali Love’s nervous breakdown vocals into something truly spooky.

The Broadcast-esque pysch of Cate Le Bon’s turn on the title track and the chilled-out, smoky saxophones on ‘Radiate’ are other highlights. The minimalist house on the excellent closer ‘Wide Open’, featuring the talents of the mighty Beck, is possibly the best of the lot, bringing the set to a close on a more calming note than the paranoid, sanity-fraying sounds before it. When a voice looms out of ‘I’ll See You There’ halfway through the record going “the future… I’ll see you there”, there’s the implicit feeling that the future won’t be a pleasant one. Perhaps referencing the darker side of drug culture, maybe this isn’t a trip you want to go on, but you’ve taken the pill and you’ll just have to stay calm and ride it out.

There are a couple of noticeably weaker moments to prevent Born In The Echoes from truly being considered alongside the Chemical Brothers’ first three albums. Leaving aside its charming Michael Gondry-directed video, lead single ‘Go’ is disappointingly by-the-numbers, with Q-Tip phoning in a list of generic aspirational slogans (“no time to rest / just do your best”). An instrumental diptych of ‘Just Bang’ and ‘Reflexion’ attempt to recall the continuous mix of the first side of their 1995 debut Exit Planet Dust with limited success. However, it does provide the listener with space to reflect among the abrasive, twisted sounds of the rest of the record.

That atmosphere is what makes it the most cohesive collection the duo has released since the turn of the millennium: that uneasy sensation that either you’re either losing your grip on reality, or reality is slipping outside of your control. Like the brooding electronica soundscapes of Further spiked with bad acid, Born In The Echoes is the darkest Chemical Brothers release in some considerable time, but its youthfulness and energy proves their continuing relevance at the beginning of the third decade of their career. In an EDM-dominated era where longevity is the most elusive of qualities, it’s even more impressive to be able to say this. (7/10)

Listen to Born In The Echoes here!