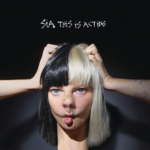 Adele, Beyonce, Shakira and Rihanna: what do they all have in common? They all rejected tracks from Austalian writer-for-hire Sia that eventually made it on her sixth album This Is Acting. Sia Furler has long prided herself on being able to adopt the persona of any given pop-star and write a hit in an instant; Rihanna’s ‘Diamonds’ was written in 15 minutes, while Sia’s David Guetta collaboration ‘Titanium’ was written in 40. So it feels apt that the follow-up to 1000 Forms Of Fear (an album which featured monster hits ‘Chandelier’ and ‘Elastic Heart’) is called This Is Acting as the ever illusive Sia remains just that.

Album opener ‘Bird Set Free’ is the perfect example of what this album is; a track originally written for the Pitch Perfect soundtrack, before being rejected by Rihanna and then recorded by Adele – only to be dropped later. The single as a whole does nothing bad from the beautiful piano (Adele) to the delivery of the vocal (Rihanna), but the problem is the lack of a connection it makes with the listener. Taking this track as what it is, it is a more than adequate pop song, but the level of dead-eyed cynicism that runs through this track, and the entire record, can feel a bit overpowering and alienating at times.

This is a theme which continues for the rest of the record, the real fun of which is guessing for whom each song was written. Single ‘Alive’ is a triumphant piece of Europop that expertly follows the formula of “victim to victory” (the term she coined in a NY Times interview) as Sia exclaims “I’m still breathing (x4), I’m alive (x4)” during a huge chorus, which unsurprisingly was also written for Adele. Although there are moments where the album can feel a bit laboured; ‘Move Your Body’ is a poor effort at EDM that harks back to David Guetta. While ‘Cheap Thrills’ provides exactly what the title says, providing a formulaic attempt at invading the bedroom of every teen girl in the country.

Fundamentally though Sia is one of the best at what she does, and it is this aspect which carries the album. ‘Sweet Design’, a jazz infected upbeat RnB track provides the albums best moment. While album closer ‘Space Between’ is a superb closer, the fact anyone could reject it is baffling. The main strength of This Is Acting is where its biggest weakness lies. The lack of a connection with Sia herself provides a real intrigue to the album as we get to see up close and first-hand the effort, or lack thereof, that goes into making a pop album. But it is this same lack of connection which means you can never fully connect with the album. This Is Acting is a fascinating listen if nothing else that keeps us at arms reach without ever fully embracing. (6/10)

Listen to This Is Acting here, and tell us what you think below!