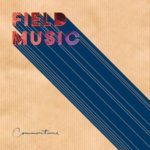 Recorded in their hometown of Sunderland, Field Music, consisting Peter and David Brewis, return with their sixth studio album looking to capitalise on the Mercury-nominated Plumb, and is considered to be one of their most accessible records to date. The duo have previously been compared to the likes of XTC, Talking Heads and Hot Chip – and Commontime perfectly highlights how Field Music are as far removed from commercial chart pop as you can get.

Thematically, the record draws on how the duo have recently both become fathers, and how new priorities and responsibilities are now the norm. Album opener and lead single, ‘The Noisy Days Are Over’ combines a funk-influenced XTC with the king of pop-funk, Prince. The track was even endorsed by the man himself having tweeted a link to the audio clip! It’s a great foot-tapper featuring choppy guitar rhythms and spiralling sax solos.

‘Disappointed’ follows in a similar funk-infused fashion alongside soulful vocals – again very similar to the swooping pitch change notorious with Prince. ‘I’m Glad’ treads on familiar territory with syncopated rhythms and choppy guitars; similar to that of ‘In Context’ from 2007’s Tones Of Town. One of the most interesting tracks, ‘That’s Close Enough For Now’, features an interesting rhythm section made up of beatbox-style pops and clicks which leads into an acoustic-led ballad.

At 57 minutes long, Commontime feels too long and detached after the 30-minute mark, with almost all of the highlights frontloaded. The pace and style changes after ‘The Morning Is Waiting For You’, which as an orchestral ballad, feels distinctly obscure in comparison to the funk influenced tracks. ‘They Want You To Remember’ has an element of contemplation delivered in not-so-serious style, typical of Field Music.

The album almost feels unsure of its identity ever so slightly, but Field Music are known for drifting into proggy arrangement-led tracks. It’s unquestionably a solid record and will appeal to long-time Field Music, but is too diverse to expect the casual listener to listen for just under an hour. There’s plenty of stand-out moments but their up-tempo funk-infused work is arguably their best to date. (7/10)

Listen to Commontime here, and tell us what you think below!