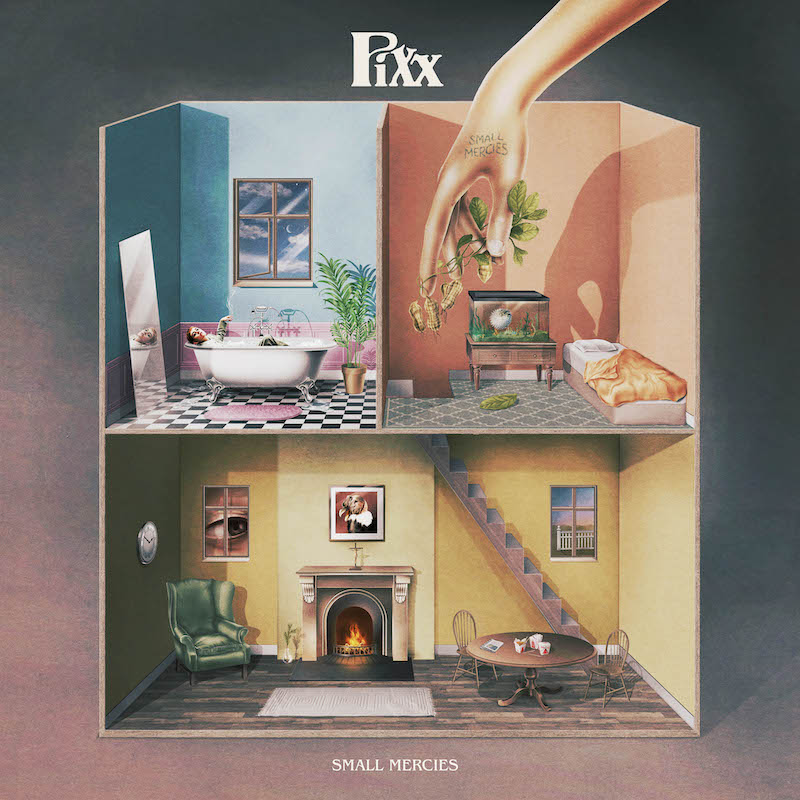 Hannah Rodgers blooms as a writer and claims an identity and sound of her own with her second Pixx album ‘Small Mercies’.

Who in the world is Pixx and why have so many never heard of her? The way-too-cool British songwriter, the musical persona of Hannah Rodgers, is back with a record as strong and as peculiar as her 2017 debut The Age Of Anxiety. Still bopping along to ‘80s drum machine beats and swelling with an array of synths, Small Mercies is full of differing POV narratives discussing environmentalism, Catholicism and (un)hopeful love. Festering in the feverish genre-hopping songs of the record, championing visuals of Mary Magdalene picking her nose and eating your first Chinese in front of a God figurine having an existential crisis, Rodgers sounds more and more unaffected and comfortable with her Pixx creation, confirming that the eye-catching bold makeup looks and cheeky videos publicise more substance than sheer audacity.

Educationally a cocktail of the Original Sin as having attended an all-girls Catholic school, empathy and love for Mother Nature that comes from her family and the confidence from being a graduate of the BRIT school, Rodgers is a vixen of a songwriter. Penning memorable zingers like “I’d like to get to know you / but I probably won’t blow you” (‘Andean Condor’) and that whole song about Mary Magdalene, you know, the prostitute disciple of Jesus Christ being ‘bad to the bone’ and picking her nose, Rodgers is unafraid to deface what used to be sacred for her in the first place and create a pop song out of it.

The three main narrative columns of Small Mercies are the current outward hysteria between man and Nature, shaking off the deeply ingrained feeling of guilt and lack of understanding of one as an individual from Catholicism and the on-going debate on power dynamics between the male and female binary in the social and working sphere. Are we still on about all that? Earth burning, God and the disputable existence of The Patriarchy? Yes, yes we are, and Rodgers avoids sounding too straightforward and simplistic about these hot topics of today by utilising her toolbelt of songwriting that consists of switching out the narrator of the song as well as the overall genre. The shimmer of disco, garage-y, post-punk, touch of funk in the bassline and the overall loom of Blondie, it all blends together into the feverish, gasping-for-breath LP that is Small Mercies.

The stand-out tracks to pull one into this ride Rodgers is on are definitely ‘Andean Condor’, ‘Small Mercies’, ‘Mary Magdalene’ and ‘Blowfish’. The first one introduces the tongue-in-cheek nature that Pixx carries with pride, the barking of dogs made part of the percussion as much as the repetitive guitar, sounding both robotic and nonchalant, as she concludes that getting close and intimate emotionally won’t necessarily result in the act of the sexual. ‘Small Mercies’, whilst not as lyrically titillating, but presenting a great melancholic chorus of appreciating the under-sung male physical form and playing off on the idea of small everyday mercies that keeps one going. ‘Mary Magdalene’ sees Pixx embracing the distortion of guitar over synth, sporting both a dead-pan attitude and a pop-hook about getting stoned in the literal and the metaphorical sense. Conceptually it probably doesn’t match up to ‘Funsize’ where Pixx sings from the point of view of a plastic Jesus figurine craving human touch and having an identity crisis – distilling the essence of religion into a piece of plastic is a bit far-fetched, but it’s a fun metaphor when you have Nietzsche’s “God is Dead” in mind.

For more fun Pixx and Catholicism-related material, listen to ‘Hysterical’, ‘Disgrace’ and ‘Eruption 24’ – God has a vile power trip on the latter. And finally, on ‘Blowfish’, Pixx takes off all the masquerade and indulges us in a love song, striking a chord of truth with the verse “I am not angry / I’m just mad, I’m just mad, I’m just sad / You left without notice / I heard that your heart was intact”. It carries the taste of anxiety as much as the debut LP The Age Of Anxiety did, satisfyingly coming full circle, even if ending the otherwise manic album on a low note.

Small Mercies is generous pop in the sense of providing catchy hooks as well as memorable and imaginative lyrical turns of thought. Maybe the strength of said lyrics isn’t as consistent at times as one would like, but in the guise of Pixx, Rodgers has a sound and identity of her own, and in the age of genre fusion and endless same-sounding indie bands, it’s a respectable feat, even though it’s a bit depressing to dance to a track about our planet dying. (8/10) (Aiste Samuchovaite)

Listen to Small Mercies by Pixx here via Spotify, and tell us what you think below!