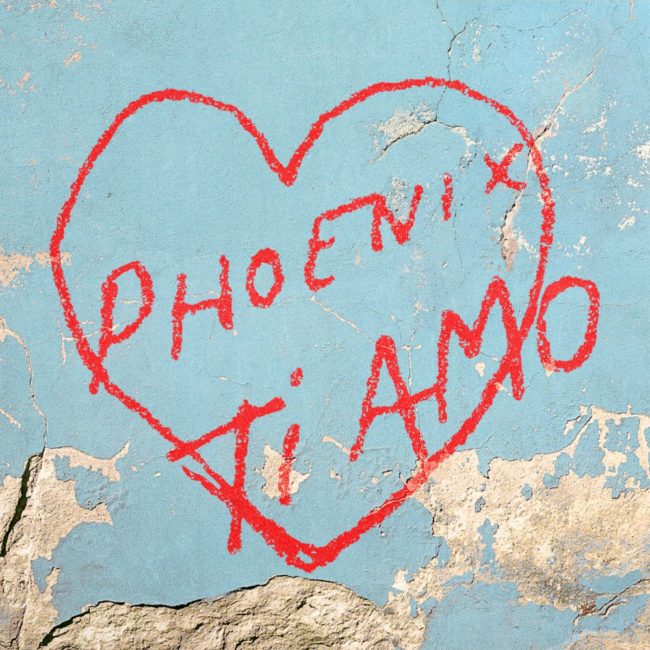 The problem for Phoenix is that many believe they have already released their masterpiece in 2009 hit record ‘Wolfgang Amadeus Phoenix’. While ‘Ti Amo’ hints that the French four-piece can reach these heights again, the reality is they may very well not.

There’s a moment at the end of title-track ‘Ti Amo’ where Phoenix lead singer Thomas Mars proclaims: “I want to believe that the best is yet to come, I know that the worst is as well, so let me count sheep, sing our songs, and dream together,” and in this quote lies the crux of the band’s sixth album Ti Amo.

The problem for Phoenix, like so many others, is that many believe they have already released their masterpiece in 2009 hit record Wolfgang Amadeus Phoenix. While there remain hints that the French four-piece can reach these heights again, the reality is they may very well not.

READ MORE: Chastity Belt // I Used To Spend So Much Time Alone

That’s not to say Ti Amo is a bad record, it follows on nicely from 2013’s Bankrupt! in being a synth heavy number. Opening track and lead single ‘J-Boy’ shimmers relentlessly under the wall of synths. Though, much like in their previous instalment, there remain problems as questionable Auto-Tune and a lack of direction in the latter stages take away from a promising start.

Following on, ‘Ti Amo’ is a Parisian affair, with Mars singing delicately about unrequited love with an alluring charm the band has perfected throughout their years. Asking “champagne or prosecco?” Mars is able to delve into whether the love is something long-term to celebrate or a short-term thrill – of course, it ends up being the latter with the song being brutally cut away as if to represent the sharp pains felt for a love not requited.

Surprisingly for a Phoenix record, Ti Amo is at its best when it is at its most melancholy and relaxed. ‘Via Veneto’ washes over the listener with twinkling synthesisers and a detached hushed vocal, while record closer ‘Telefono’ is a soft psychedelia number as Mars depicts the pains of long-distance relationships singing to his wife (and acclaimed film-director) Sofia Coppola “Come Va a Hollywood? / Oh you’re staying a little longer? / Well, but I thought you’d be done by September”.

This same melancholy sound can be heard during album standout ‘Fior De Latte’. Though this time the track evokes textures similar to that of Wolfgang Amadeus Phoenix, with the updated synth sound allowing the track to have its own life. The track bounces ideas constantly, never letting them get stale, but always enabling them to get stuck in the listener’s head – like all good pop should.

Ti Amo is the sound of a band trying to expand their sound and, for the most part, the record is a success. Phoenix may never be able to replicate the success of their mid-to-late-’00s hype, but on their sixth LP, the band have added some welcome numbers to their already stellar back catalogue. (7/10) (John Tindale)

What did you at home think? Do you agree or disagree? Listen to Ti Amo here and don’t forget to follow us on Twitter at @StudentPlaylist