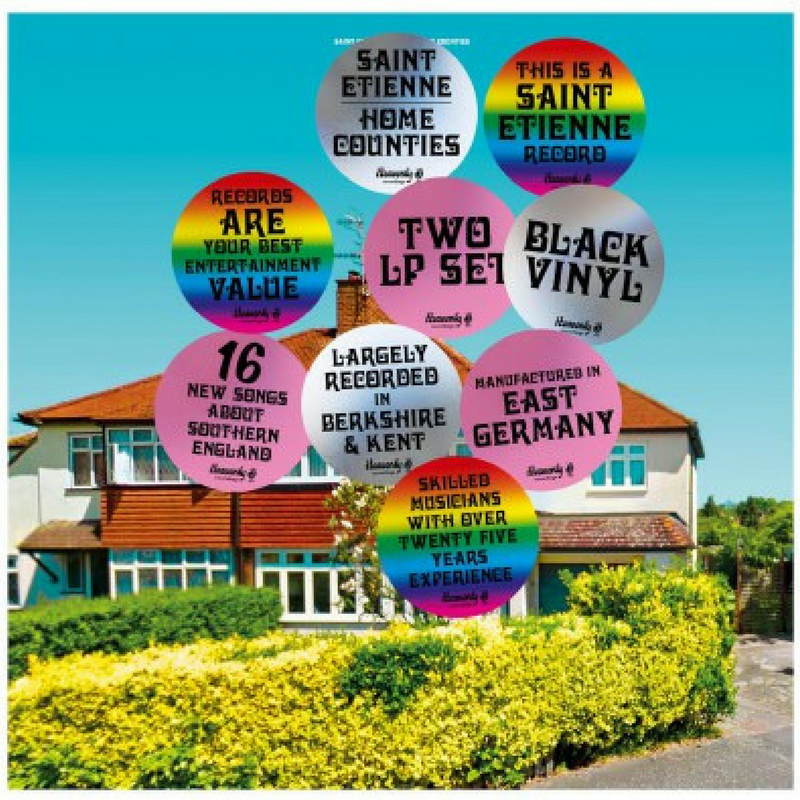 Throughout the history of British pop, the suburbs have been a fertile source of inspiration for generations of bands. From The Kinks through XTC to Suede and Blur, the ordered, identikit maisonettes with two cars in the driveway have been a muse for many a great songwriter. What else could be more idyllically suburban than the home counties that surround London – the anonymous, sleepy satellite towns, grey concrete slabs in once-green meadows and old, quaint villages nestled in the leafy countryside. It is these spaces and experiences that pre-occupy Saint Etienne on the aptly titled Home Counties.

As a dynamic, the group’s ninth studio album is like 2005’s Tales From Turnpike House, but reversed – instead of dreaming of the big city, it sees Sarah Cracknell, Pete Wiggs and Bob Stanley reflecting on where they came from, the places that shaped their personalities (Reigate for Wiggs and Stanley, Chelmsford for Cracknell) having been to London, lived there, become famous, settled down and raised families. Home Counties, with more than a tangible sense of nostalgia, sees them looking back and seeing a new sense of appeal in these spaces but still remembering their downsides.

The pop literacy and knowledgeability of Wiggs and Stanley (the latter is a former music journalist and author of the exceptional pop compendium Yeah Yeah Yeah: The Story of Modern Pop) shines through, but it’s not as frequently dazzling as on previous efforts. Sarah Cracknell’s vocals are as understated and cool as ever, her observational skills containing a hint of salacious gossip that makes her perfectly suited for the subject matter on Home Counties – what’s going on behind those suburban doors and hiding behind their occupants’ routines and lifestyles, documenting the boredom and conservative attitudes therein.

You get a great feel for Saint Etienne’s matured yet quietly satirical approach on ‘Whyteleafe’, a harpsichord-driven ditty making salty remarks that both glorify and undercut things like Toby Carveries. ‘What Kind Of World’, with its splashy hip-hop-esque beat, is the obligatory Brexit commentary, and the kind you would expect from such an outward-looking and smart band. However, Home Counties is certainly a bitter or angry album, its outlook for the most part merely descriptive and observational, able to see the suburbs for what they are and to celebrate them as well as subvert them.

The shimmying, disco house-party vibe of ‘Dive’ is a stand-out moment, Cracknell’s voice like a cool breeze on a stifling summer’s afternoon. The smoothly mechanised disco-pop, both mature and sultry, of ‘Out Of My Mind’ shows the kind of mood Saint Etienne are in throughout – happy to sit in cruise control for a lot of the record and allow Cracknell’s lyrics and voice to be the focus. The flutes on the brilliantly weird ‘Train Drivers In Eyeliner’ are precisely the kind of sun-kissed, laconic music that Saint Etienne have been experts in constructing for so long.

There’s not a single bad track on Home Counties, remarkably, for a 19-song record, but the only criticism is that so many tracks of a similar atmosphere and vibe can make them seem to blend into one. The brief interludes sampling Ken Bruce’s Popmaster radio quiz and the local football results are a nod to the pop-art sampling of their classic 1991 debut Foxbase Alpha and its equally wonderful follow-up So Tough (1993), and break up the record neatly.

The penultimate eight-minute track ‘Sweet Arcadia’ reveals itself to be the beating thematic heart of Home Counties, using a train journey from Fenchurch station as a launching pad to a spoken-word track that takes in the Thatcherite suburban dream (“a home of your own”) and then to the values of a generation older than that (“make do and mend”), operating a bit like Pulp’s ‘Wickerman’ from We Love Life. It’s always the sense of time and place that really makes any Saint Etienne record. Just like So Tough was about being young and alive in London and 2012’s Words And Music By Saint Etienne reflected on teenage pop nostalgia, Home Counties is about bored childhoods that one realises, in hindsight, were secure and safe.

Saint Etienne have spent the last two decades admirably trying to emulate the joyous pop elegance of their early/mid-‘90s golden era and, while usually falling just short, nevertheless proving their relevance to the contemporary scene again and again. Home Counties is a continuation of that trend – consistently entertaining and often unutterably lovely, they’re one of Britain’s most underrated musical treasures. (7/10) (Ed Biggs)

Listen to Home Counties here via Spotify, and tell us what you think below!