“Well It’s True That We Love One Another”: An Introduction to The White Stripes 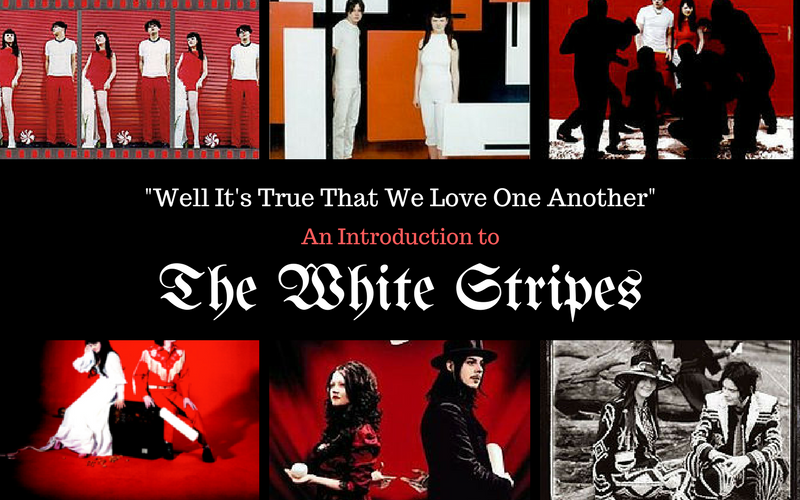 June 2007 marks the 10th anniversary of the release of The White Stripes’ sixth and final studio album, Icky Thump. They channelled the raucous, proto-punk sound of Detroit’s rock glory days, along with influences deriving from traditional country and folk music, into a stripped-down ‘blues/punk’ sound. Particularly on their early records, Meg White and Jack White often sounded like they were un-learning their instruments, ideologically boiling the drums and guitar down to their essences. As many artists subsequently embraced their back-to-basics approach to recording or drew inspiration from their ability to wring so much sonic power and variation from a simple drums-and-guitar combo, few bands defined the noughties like The White Stripes.

Despite his undeniable talents for soloing and the rich talent of musicians he’s worked with subsequently in The Raconteurs, The Dead Weather and on his two solo albums, Jack White’s work has rarely been as raw, thrilling and ruthlessly effective as when Meg’s primal, basic and thumping rhythms have been there to anchor him down. Paradoxically, when forced to think inside a box, within the pre-defined parameters of The White Stripes’ minimalist aesthetic, the results are invariably far more consistently good than anything Jack White has attempted elsewhere. Check out the scintillating performances on Under Great White Northern Lights, a 2010 live album documenting the Stripes’ Canadian tour of 2007, and try arguing this isn’t an artist at the peak of his game.

In the early days of the band and when the British music press first discovered them in 2001, Jack and Meg had enormous fun at the expense of journalists, playing around with their backstories in order to create an aura of mystique about them. In some interviews, they claimed they were a married couple; in others, and frequently in concert and even on record, they said they were brother and sister. The truth was the former: they were married from 1996 until 2000, around the time of the release of their second album De Stijl, although they were able to toy around with this because Meg’s birth name was White but Jack’s real surname is Gillis. Don’t forget, although the internet was commonplace, social media was not invented yet, and it was still possible for a band to create a mythology around itself that is virtually impossible for a newcomer in 2017. Their distinctive visual aesthetic, keeping everything red, white and black, reinforced this sense of mystery and identity.

Following two self-produced, rough and ready records that were the cream of the crop of Detroit’s garage-rock scene in the late ‘90s, their third album White Blood Cells (2001) turned out to be the tipping point for the band, where they reached critical mass began to enter the national mainstream, cited along with the likes of New York’s The Strokes and Yeah Yeah Yeahs as part of a back-to-basics garage rock revivalism at the start of the noughties. Even in the UK, the Daily Mirror described them as “greatest band since the Sex Pistols”.

Scoring one of the most distinctive guitar hits of the decade with comeback single ‘Seven Nation Army’ in 2003, which immediately became their signature song and the tune of which still chanted in sports stadiums to this day, The White Stripes went overground in a big, big way with their fourth studio LP Elephant. Winning awards for music videos such as ‘The Hardest Button To Button’ and Grammys and BRITs for the album and its singles, Jack and Meg had gone from local scene obscurity to household names in less than half a decade.

However, there was plenty of evidence that the two weren’t particularly cut out for celebrity. Both attempted to remain enigmatic, with Jack throwing himself into production side-projects throughout 2004, but their experiences with fame were documented in the uneven but intriguing Get Behind Me Satan in 2005. Jack’s side-project The Raconteurs rocketed to fame the following year, which many assumed would be the end of him and Meg, with collaboration projects providing the perfect escape hatch for Jack as he worked with huge names in both The Raconteurs and, later, The Dead Weather, merging more into the background. However, one more White Stripes record was to come in the shape of 2007’s Icky Thump.

In early February 2011, after a four-year hiatus in which he recorded the James Bond theme ‘Another Way To Die’ (for 2008’s Quantum Of Solace), Jack announced that he and Meg had officially ceased recording music as The White Stripes. Three years later in a 2014 interview, he suggested that it had been Meg’s waning enthusiasm for the project that had been the main factor behind their demise. This may be slightly harsh, as a number stories emerged toward the end of their world tour in 2007 suggested Meg was suffering from “acute anxiety”, which led to multiple gig cancellations.

Whatever caused the split, Jack and Meg White left behind one of the most interesting and influential back catalogues of work of pretty much any guitar band of the last two decades.

If you only know a couple of songs and haven’t heard any of their six studio albums, there’s a whistle-stop guide to The White Stripes’ rich catalogue of six studio albums on the next page, and below is a Spotify playlist of their discography highlights.