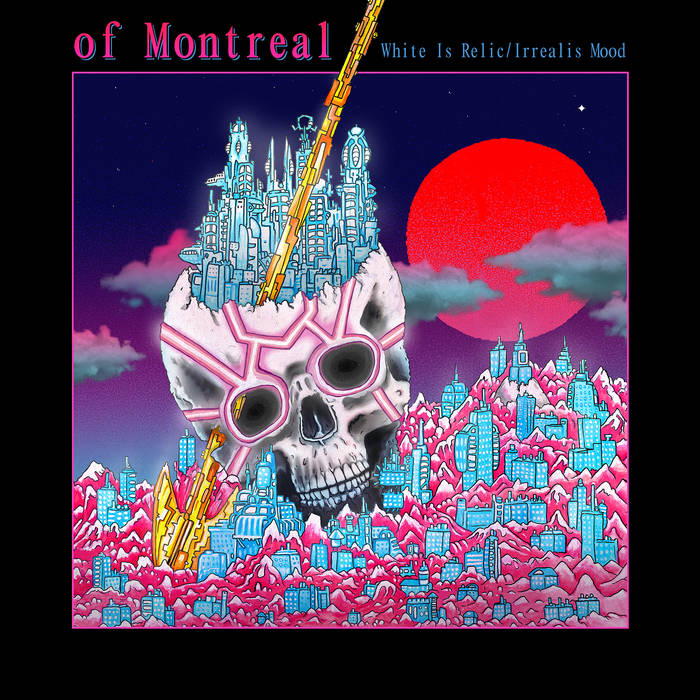 The 15th of Montreal album ‘White Is Relic / Irrealis Mood’ might be the long-awaited re-affirmation for fans that Kevin Barnes is still capable of constructing something that resonates with more people than just himself.

Somewhere amidst a travelling circus show, ridiculously excessive number of costume changes, psyches crumbling left and right, candid wish-fulfilment fantasies of hyperbolized decadence, and middle-aged African-American transsexual alter-egos named Georgie Fruit, stands Kevin Barnes. The hermetic, soft-spoken prophet for all those who tag their two friends in surrealist memes and read Victorian-era French erotica “for research purposes”. Riding in on a white horse (literally.) he validates their mental mismanagements and perversions with a semi-autobiographical sermon of his own mental shortcomings and disintegrating relationships.

If you’ve never heard of of Montreal, otherwise known as the weird man prancing around in drag, dancers with white poodle-masks in the background, singing songs about subjects ranging from his inner-most personal demons, to identity politics, to cathartic sexcapades, fear not, my dear summer child. All you really need to know is that over the course of two decades and 15 albums, frontman and songwriter Kevin Barnes has produced a discography that reads both as a biographical run-through of his recurring mental issues and a catalogue of his shifting musical obsessions. The artistic peak of both being, as affirmed by a general consensus of basically everyone, 2007’s magnum-opus for the indie-pop genre – Hissing Fauna, Are You The Destroyer?.

As a side note, it would be worth mentioning that Barnes tends to explore his own identity and the medium of performance through a cast of colourful, vaudevillian alter-egos. He embodies these characters like a less poised version of David Bowie, yet relatable in its depravity. He has also gone on record in some interviews talking about some loose narrative he apparently has going on in his head that he occasionally taps into for writing purposes, but at the end of the day, it doesn’t really matter. The charm of of Montreal has always come from, and most likely will continue to be, fans identifying themselves in Barnes’ incredibly open confessions, and exploring their own dissatisfaction, psycho-social nuances and general weirdness through relating themselves in some shape or form to the on-going canon of the project.

So now we arrive at the 15th album of of Montreal’s incredibly prolific career – White Is Relic/Irrealis Mood. In this particular moment in time, Barnes’ main musical inspiration seems to be dance music, as inferred from bits of 2016’s Innocence Reaches, and now a continuing exploration of it on this newest release. The last two apocalyptic years for humanity seemingly left an impact of Barnes as well, as the lyrics this time around centre about his paranoia about living in a simulated reality, as well as the occasional whiff of new, perhaps slightly emotionally unhealthy, love. To the joy of everyone and, doubtless, the surprise of some, the album affords one of the most consistent and enjoyable listening experiences in the entirety of the project’s lifespan. Arguably the most so since the creative apex of Hissing Fauna….

Kevin Barnes has always been known for writing somewhat schizophrenic pop songs, more often than not completely failing to stick to traditional song-writing structure. The results of this ranging from the wonderfully dynamic and engaging tracks of Hissing Fauna…, to the sluggish, often indiscernible, and seemingly ill-conceived sexual meanderings of 2008’s Skeletal Lamping. On White Is Relic/Irrealis Mood, Barnes adopts a consistent two-part structure that guides every song on the album, and provides a framework to keep his easily straying pop sensibilities in. The biggest achievement stemming from this being the fact that Barnes was able to stretch six songs over a 40-something minute album, without it every feeling needlessly prolonged or forced.

Over impeccably groovy electronic beats, reverbed vocal harmonies, excellent synthesizer riffs, and funky bass lines, Barnes continues to excel in the exploitation of tonal dissonance between the musical and the lyrical aspect of songwriting. As the dance party winds to a close, you will have heard confessional tales of anxieties about living in a simulated universe, possessiveness stemming from what can only be described as savior complex, and incredibly self-aware skewerings of one’s own Human Condition, amongst others. His almost hilariously broad lyrical vocabulary is on full display here as well. Thoughtfully, for every near-incomprehensibly dense stanza such as:

There’s a moment of tectonic plate-shifting insight like “It’s good for us depressives to keep someone else alive”. And when these moments do emerge, it’s all the more cathartic for the five minutes of film studies glossary and rave music it followed.

Kevin Barnes is the guy who described his own personal version of heaven as: “An all-encompassing absentmindedness and vacantness – no ego, no identity, no personality, no senses, no desires, no interests, no potential, no dynamics, no passion, no stasis, no imagination, no being, no feelings, and everyone closed-mouth smiling with dead eyes.” And if you find yourself at least kind of understanding where he’s coming from, you will most likely enjoy a lot of what he has to say on White Is Relic/Irrealis Mood.

Songs like the catchy ‘Paranoiac Intervals/Body Dysmorphia’ could compete with some of the best songs Barnes ever penned and, for fans of the band, this is likely going to be the long-awaited re-affirmation that their neurotic adopted son is still very much capable of constructing something that resonates with more people than just himself. For newcomers, there are much worse places to get introduced to the near cult-like phenomenon and canon of Kevin Barnes and of Montreal. (8/10) (Ellie Wolf)

Listen to White Is Relic / Irrealis Mood by of Montreal here via Spotify, and tell us what you think below!