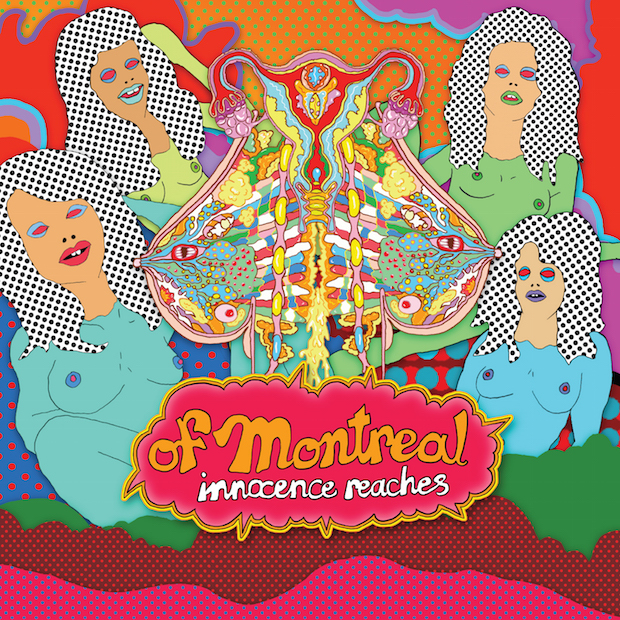 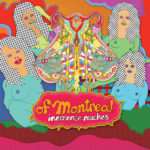 Maintaining audience interest has always played a vital role in the development of a formidable artist within popular music. Having seen figures such as Prince and Bowie repeatedly distort everything from base sound to artistic character, methods of keeping mass attention focussed, or even hooking outsider interest, continues to be expanding in ideas.

Now adding a 14th studio album to his ever-expanding galaxy of a discography, Kevin Barnes, or of Montreal as he’s better known to his devoted fan base, remains to hold his title as one of the clearest, contemporary examples of sustaining an artistically malleable career. His ever changing and somewhat bizarre approach to formulating his consistently distinct sound has managed to churn out record after record dabbling in funk, psychedelia and everything in between. His new album, Innocence Reaches, sees Barnes revert back into aspects of his days delving in glam rock as he attempts to deal with binary gender ideas and social identification but, this time, through a sonic use of synth pop, hints of glam guitar and even spilling into the realms of EDM. Although Innocence Reaches channels a collection of characteristics employed by some of music’s most engaging icons, its attempts to strike upon the eccentricity factor forges a few unfortunate defects.

Opening with the thick riffs of ‘Let’s Relate’, Barnes immediately reminds us of his ability in writing an instantly memorable hook. Layering what can be described as almost Calvin Harris-style electronics, ‘Let’s Relate’ teases 21st Century gender norms by repeatedly flirting with the question, “How do you identify?”. Continuing to build upon this theme, lead single and second track, ‘It’s Different For Girls’ is a verbal tirade against masculine oppression delivered in defiantly catchy, pop punk verse. Although it’s easy to brush off Barnes lyrics as cornering the female gender through poetic allocations when uses descriptive phrases like “mercurial creatures”, however there’s certainly a degree of tongue-in-cheek involved as he dissects everything wrong with male and female contrast through delicately discrete humour. Tracks ‘Gratuitous Abysses’ and ‘Les Chants De Maldoror’ take on similarities to Marc Bolan, however Innocence Reaches then sinks into a clear sense of totally unneeded desperation to be distinct and outgoing.

The problem doesn’t lie within an overload of avant-garde melody but simply with Barnes’ desire to have a solely individual input. Unlike his muses, Prince and Bowie, Barnes has never truly grasped the notion of collaborative material. Even insisting on doing his own backing vocals, the rest of Innocence Reaches seems a little one-dimensional. That being said, the album deals with grand and relevant themes like gender oppression using accessible methods and displaying awareness without any notion of pretension. All we can do now is anticipate which form Barnes will take on next. (7/10)

Listen to Innocence Reaches here via Spotify, and tell us what you think below!